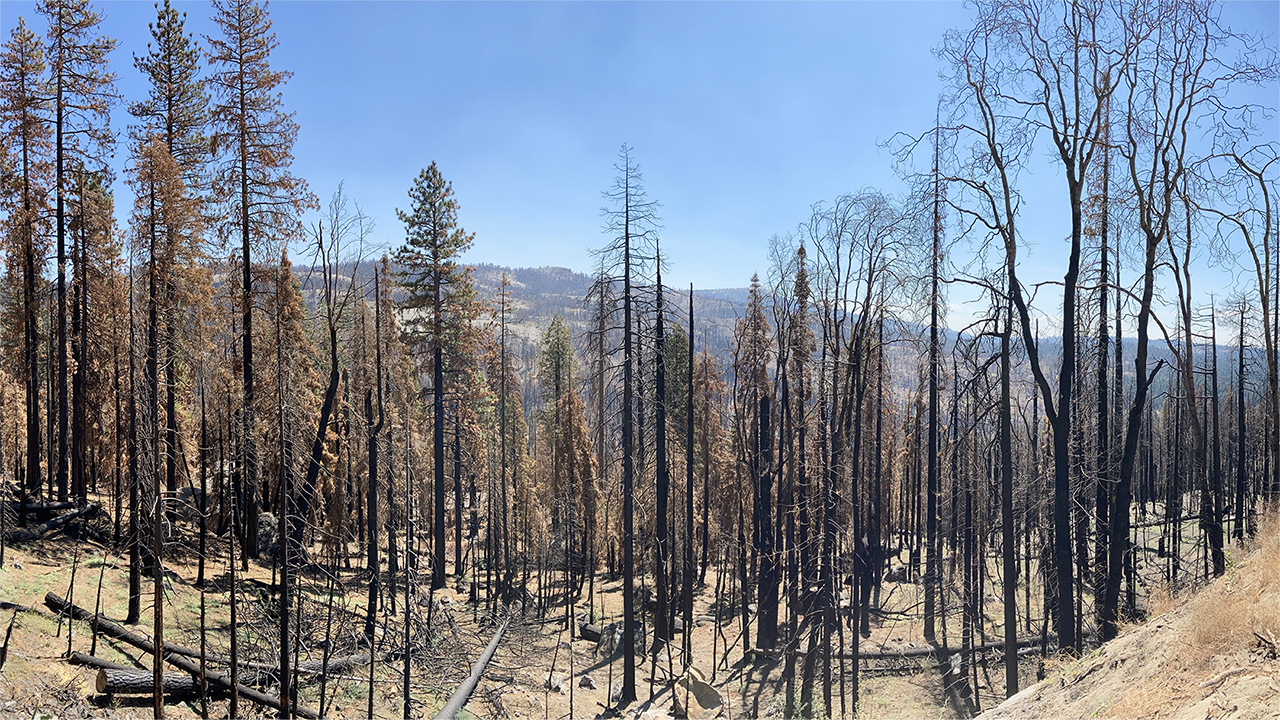 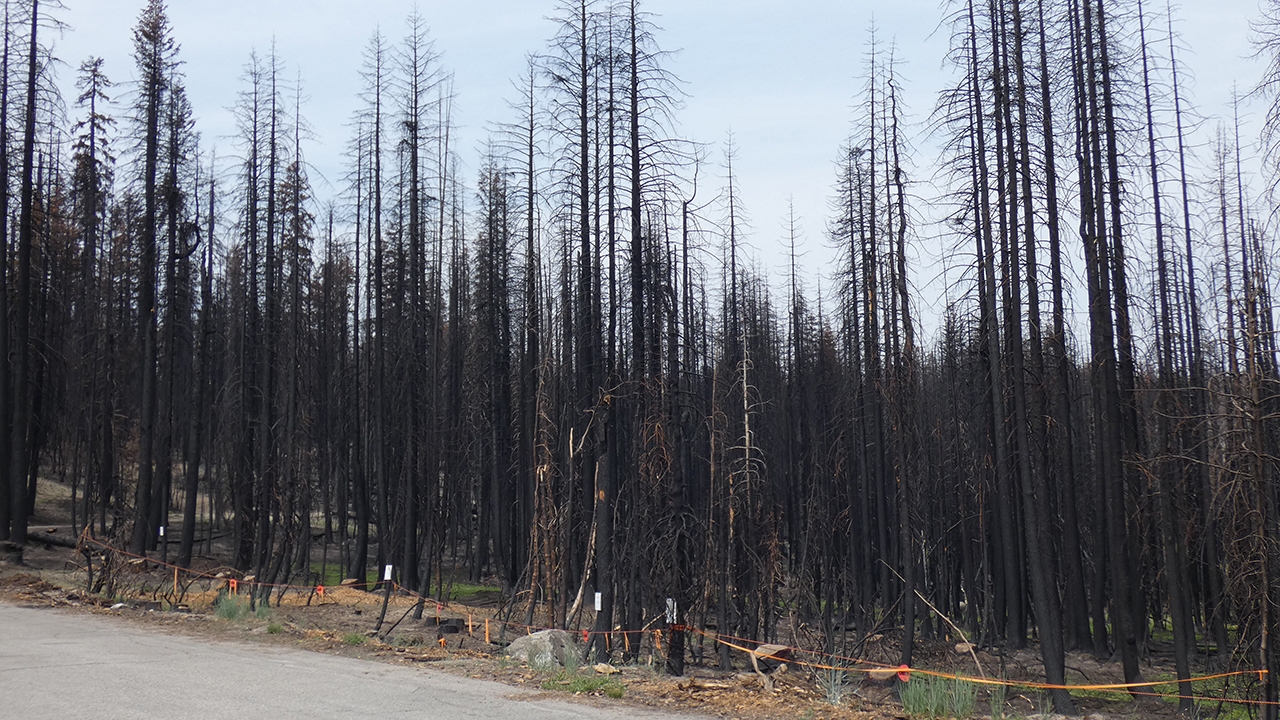 in California’s Sierra Nevada was the fifth largest in modern California history. It burned in an area where drought and bark beetle outbreak resulted in widespread tree mortality. 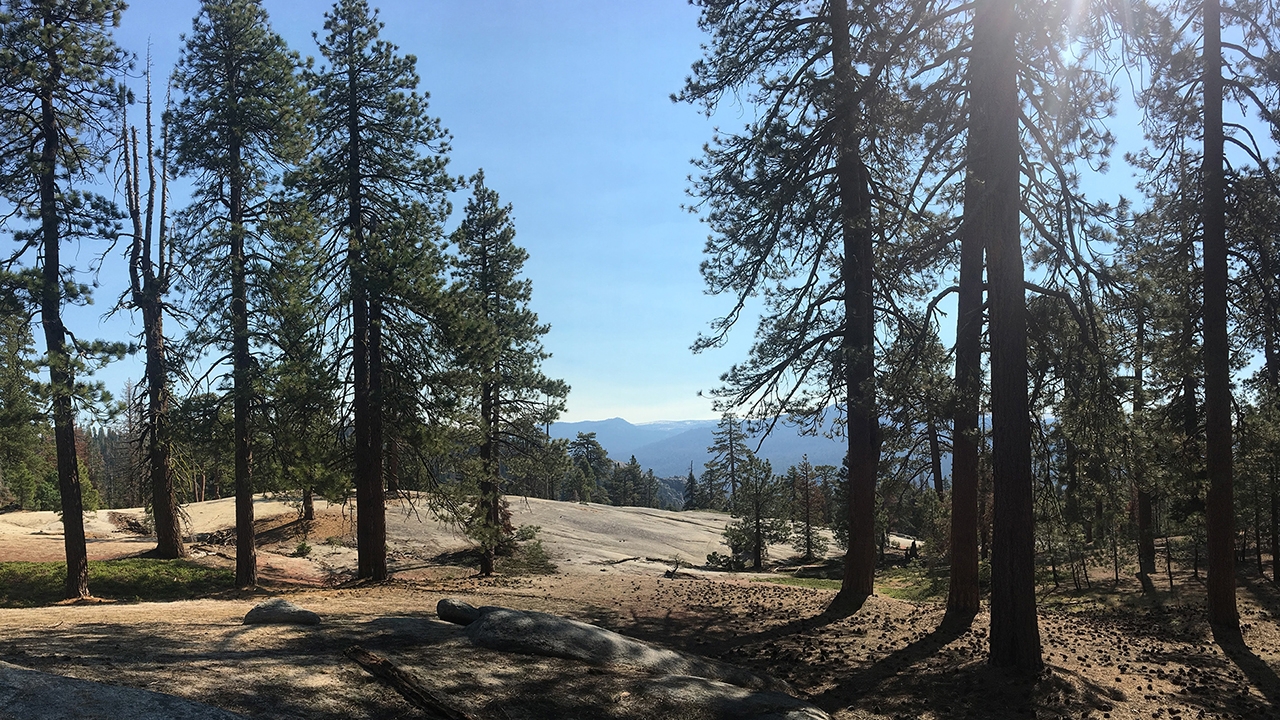 was implemented in 1997 to quantify the effects of fire and thinning on the ecosystem.

In North America, wildfire activity has been increasing in large part due to climate change, which is increasing the amount of energy stored in biomass that can be released as heat during a wildfire. Drought stress, insect outbreaks, and temperature increases have caused large areas of tree mortality and rising temperatures are drying out forest fuels, making them more available to burn. The amount of energy stored in forests that is available for release from fire depends on the amount of water stored in live and dead biomass, which acts as a regulator on the amount and rate of energy release. Fuel moisture of dead biomass is more responsive and fire-prone with increasing temperature than live biomass and the combined effects of tree mortality and high temperature could be responsible for the substantial energy release that has characterized modern wildfires.

The research, Climate-driven tree mortality and fuel aridity increase wildfire’s potential heat flux, conducted by UNM scientists Marissa Goodwin and Matthew Hurteau, was published recently in Geophysical Research Letters. The study, which considered tree mortality as a result of climate change and an increase in fuel aridity, used temperature and fuel moisture data for both live and dead trees to examine climate-driven changes in fuel moisture content over the past three decades. The scientists also calculated the changes in energy release (energy release component and fire radiative energy) from two forests that experienced drought and bark beetle mortality and subsequently burned by wildfires during the 2020 fire season in the western United States. 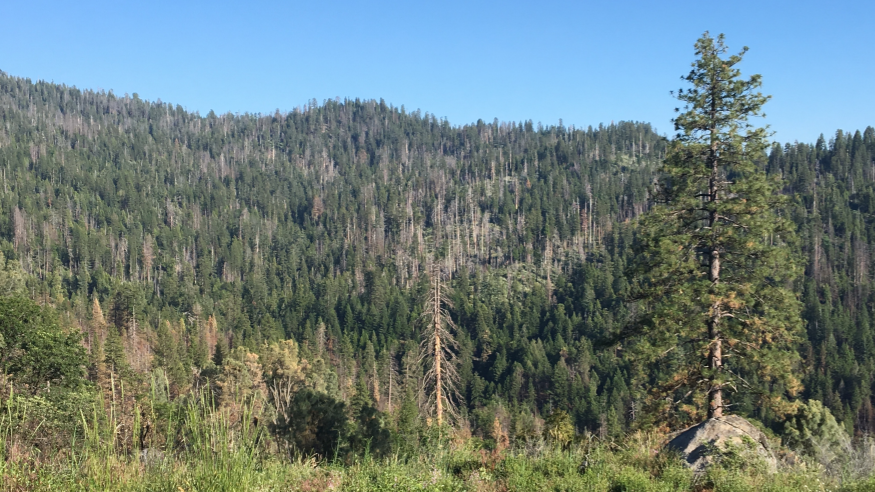 The Creek Fire in California’s Sierra Nevada was the fifth largest in modern California history. It burned in an area where the 2012-2016 drought and subsequent bark beetle outbreak resulted in widespread tree mortality, while the Cameron Peak Fire in the Colorado Rocky Mountains, which was the largest in Colorado history, burned through forest with large numbers of bark beetle-killed trees. The two forests differ in climate with mixed-conifer forests in California’s Mediterranean climate being seasonally dry while Colorado’s lodgepole pine forests are cool and wet, but fire intensity in both areas is influenced by fuel moisture and fuel availability.

“We found that tree mortality transitioned substantial amounts of biomass from living to dead pools,” says Goodwin, a master’s student in the UNM Department of Biology and lead author of the paper. “Coupled with climate-driven decreases in fuel moisture content, this change in fuel availability increased the amount of energy that could be released as heat during a wildfire in these forests. These results demonstrate that climate-driven tree mortality and fuel aridity may be increasing the amount of energy that is released during a wildfire.”

The tree mortality numbers are staggering in those forests providing ample dead fuel for wildfire to burn. In the Sierra National Forest, an estimated 36 million trees have died from drought and bark beetle mortality over the past five years, which is approximately 25 percent of the trees in the Sierra National Forest. In the area where the Creek Fire burned, a CALFIRE summary reported estimates of 80 percent tree mortality. In Colorado, Forest Inventory and Analysis Data estimates of lodgepole pine mortality from Mountain Pine Beetle infestation range from 40-50 percent, while 87 percent of the area in Colorado containing lodgepole pine has been affected by mortality, which is approximately 3.4 million acres.

“The amount of vegetation that's available to burn is controlled by how much water that vegetation stores,” said Hurteau, a professor in the UNM Department of Biology and also co-author on the paper. “As we move trees from the live column to the dead column because of insects and drought, they’re not taking up water the way a live plant does. They hold a lot less water and become more available to burn. It is similar to building a campfire, dry wood makes a better fire than wet wood.”

“The 2020 Creek Fire was coming off a substandard winter so there wasn’t great precipitation that winter. Then the temperatures were really high that spring and summer, which caused all that dead wood from the 2012 to 2016 drought to dry out and become available to burn. There is a demonstrated positive relationship where as temperature goes up, more area burns.”

“We’re trying to understand the relationship between the climate piece and how all this tree mortality from drought and insects is going to change the amount of fuel available,” said Hurteau. “When you have all that additional fuel from all the dead trees, it's going to burn a lot hotter. In the Creek Fire, the plume was 50,000 feet in the air so that was a lot of energy moving out of the system. When you release that much energy, the fire creates its own weather, and you get really extreme behavior.”

“What I found most telling (from the research) is that high temperatures in 2020 resulted in lower fuel moisture contents and higher calculated energy release than we saw during the drought periods these two forests experienced,” said Goodwin. “Drought and beetle mortality transitioned a substantial amount of biomass on these landscapes from the live fuel to dead fuel types. When you have all this dead fuel and then also turn up the thermostat, everything was just primed to burn when those two fires occurred.”

Support for this project came from the California Department of Forestry and Fire Protection (CAL FIRE) as part of the California Climate Investments Program.