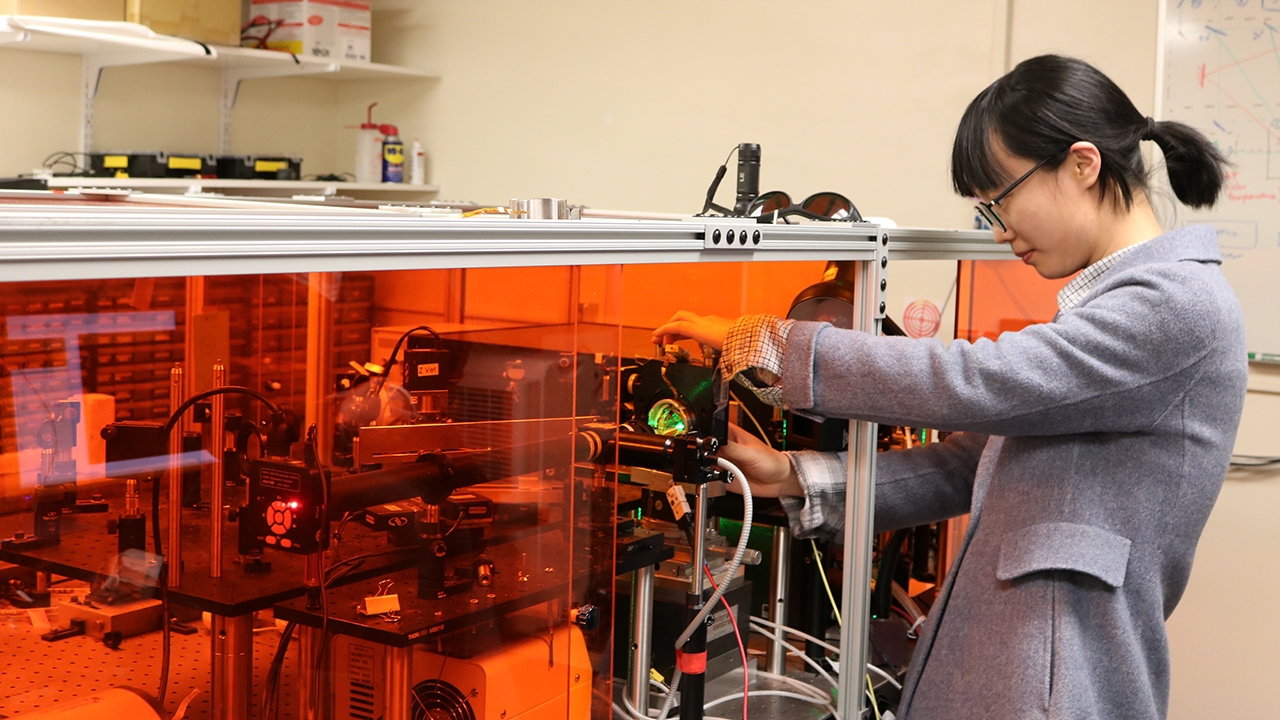 diamond anvil cell on the sample stage for Brillouin spectroscopy experiments, which can be used to extract the speeds of the sound waves traveling within the probed samples. 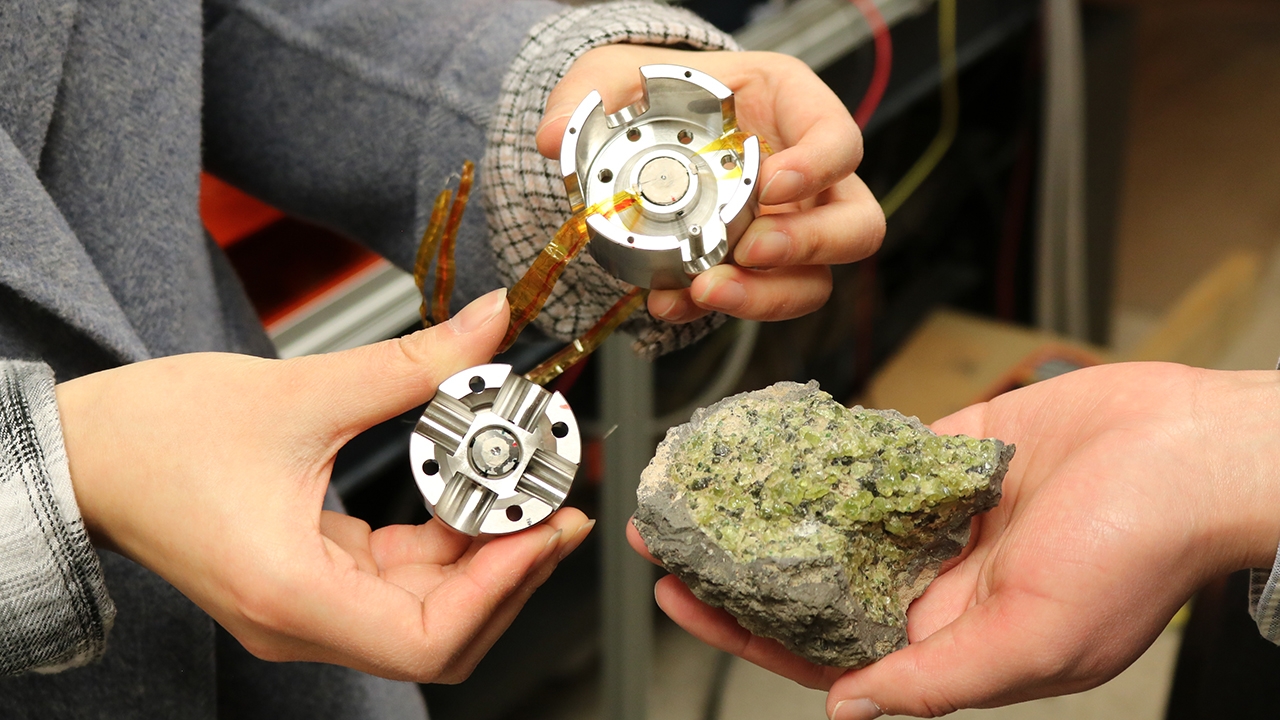 for generating the high pressure-temperature conditions scientists expect to see inside the Earth. A wadsleyite crystal ~ 40 microns in dimension will be sandwiched between the two diamonds. The major pale green mineral olivine in the mantle peridotite shown in the photo will transform into wadsleyite at mantle transition zone pressure temperature conditions.

Scientists at the University of New Mexico are modeling water in deep Earth using the mineral wadsleyite to determine composition and temperature variations to decipher the material exchange processes between the upper and lower mantle.

The research titled, Constraining composition and temperature variations in the mantle transition zone, was conducted by UNM doctoral student Wen-Yi Zhou and Assistant Professor Jin Zhang in the UNM Department of Earth and Planetary Sciences, and UNM’s Institute of Meteoritics. It was published recently in Nature Communications. Additional scientists in the research include UNM's Brandon Schmandt, Ming Hao and Ruijia Wang, and Bin Chen from the University of Hawaiʻi at Mānoa.

The mantle transition zone or MTZ connects two major layers of Earth’s interior that may be compositionally distinct: the upper mantle and the lower mantle. Wadsleyite, a high-pressure phase of olivine, is a major mineral found to be stable in the upper mantle transition zone approximately 400 to 500 kilometers in depth. Wadsleyite is known to leave some oxygen atoms insufficiently or under bonded which allows these oxygen atoms to be hydrated easily, and in turn, allows high concentrations of hydrogen atoms in the mineral.

“The Earth has layer-like structures so we have crust, mantle and core from the top surface to the center,” said Zhang. “We're focusing on this layer, which is between the upper mantle and the lower mantle. We call it the mantle transition zone. The upper mantle is closer to us and it's relatively refractory and depleted. Underneath is the lower mantle and it’s quite fertile and enriched geochemically speaking. These two compositionally different layers are linked by this transition zone in between. Studying the variations of the chemical composition horizontally at different locations will tell us the dynamic material exchange processes between the upper mental and the lower mantle.”

Hydrous wadsleyite is considered a potential site for water storage in the earth's mantle due to the low electrostatic potential of the under bonded oxygen atoms. Although wadsleyite is nominally anhydrous, it may contain more than 3 percent by weight H2O, making the mantle transition zone a giant water reservoir inside Earth.

“We want to look at basically, for example under Albuquerque, whether it's made of one kind of rock and then say under Washington D.C., they are made of other types of rock,” said Zhang. “And how do we determine what rock is it? We know the velocities of different mantle transition zone minerals with different water contents under different temperatures. So, if you have different rocks, which are made of different minerals with different water contents, then we can calculate their sound velocities and compare with seismic observations in real life.” 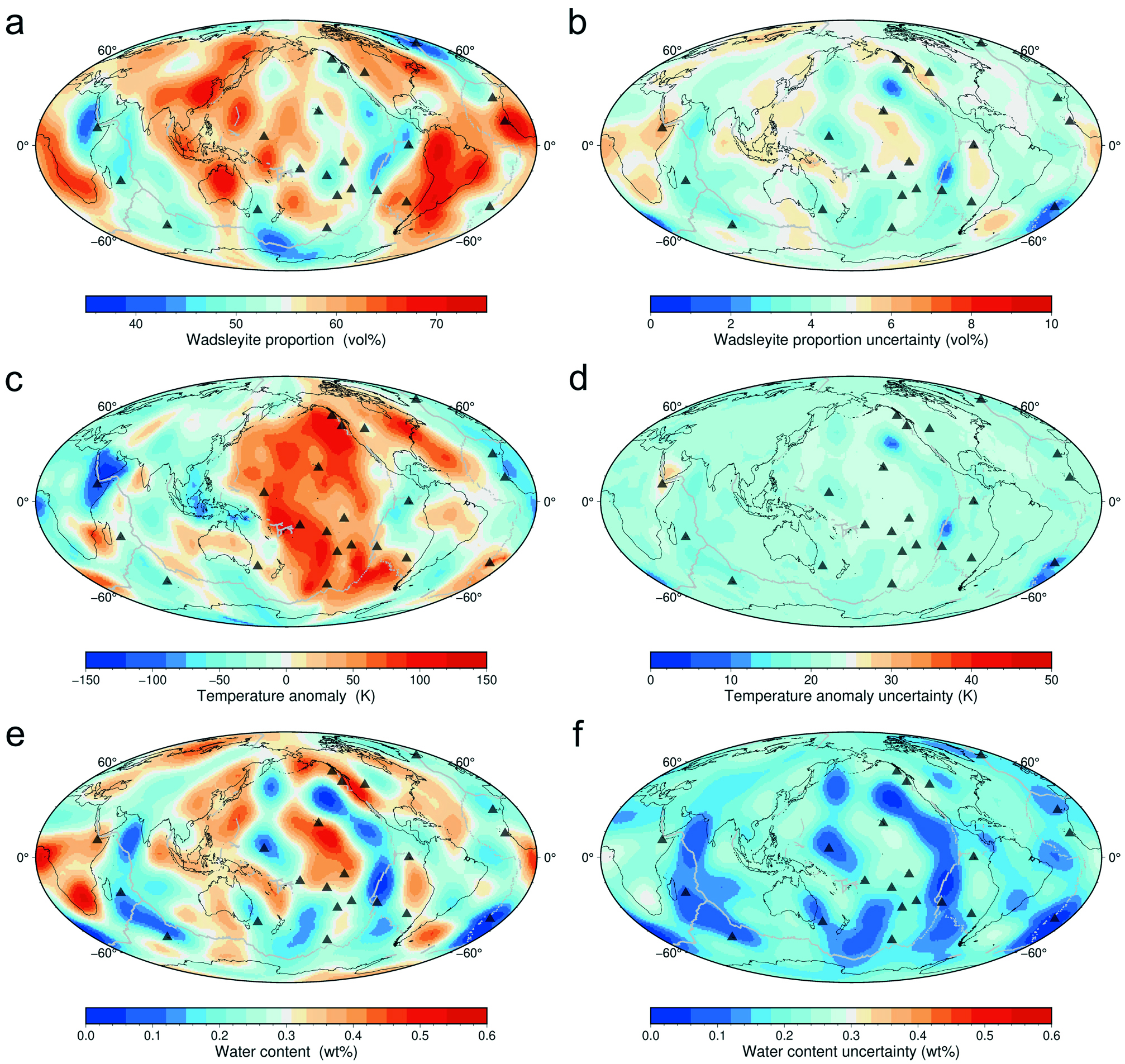 As part of the research, the scientists measured the single-crystal elastic properties of hydrous Fe-bearing wadsleyite at high pressure-temperature conditions by Brillouin spectroscopy. The results were then used to model the global distribution of wadsleyite proportion, temperature, and water content in the upper mantle transition zone by integrating mineral physics data with global seismic observations.

The models illustrated that the upper mantle transition zone near subducted slabs is relatively cold, enriched in wadsleyite, and slightly more hydrated compared to regions where plumes are expected. This study provides direct evidence for the thermochemical heterogeneities in the upper mantle transition zone which is important for understanding the material exchange processes between the upper and lower mantle.

“We conducted experiments to measure one of the most important, most abundant minerals in the transition zone, which is wadsleyite, and also build up a composition, temperature-dependent velocity models so we can actually tell what kind of composition we have in the transition zone,” said Zhou. “As the mantle transition zone connects the upper and lower mantle, mapping the thermochemical heterogeneities in the MTZ is critical for understanding the material exchange between the upper and lower mantle and volatile storage and transport in the deep Earth.

In previous research by Zhang, it was suggested that possible chemical composition in the MTZ, at least locally, can significantly deviate from the idealized pyrolite model and influence seismic observations of discontinuities, an important reason why modeling the water content and the bulk mineralogical composition together is needed to quantify thermochemical heterogeneities in the MTZ.

To statistically analyze their associations with different geographic and tectonic settings, the scientists selected four regional groups: ocean, continents, subducting slabs, and hotspots (plumes). The scientists produced a global map utilizing this kind of approach basically in the transition zone where there are two kinds of minerals highlighted in this region. They looked at the seismic observations on Earth, which would depend on three things – how much water is in one location, what is the temperature in that location, and how much wadsleyite there.

“If the mantle transition rock is more refractory, there is more wadsleyite, which means it has more water storage capability,” said Zhou. “If it's more fertile, that means it has more garnet. We conducted the experiment to figure out the three things at the same time to reveal the temperature, the thermal and the chemical composition variations in the mantle transition zone. These three factors contributed to the seismic observations.”

They illustrated their findings with various color regions highlighting the mineral levels and found that the mantle transition zone is enriched in wadsleyite beneath subduction zones, for example, beneath the western U.S.

“There are two different end-member rocks we are seeing inside the earth. One is very depleted, very refractory,” said Zhang. “One is very enriched in the fertile. The fertile rock is like the black basalt we see west of Albuquerque. The other one is like the residual rock after you have already extracted the basalt from the mantle. These are two different chemical members. When you put these rocks in the mantle transition zone, the minerals in them will convert into other types of minerals because these rocks are only happy to stay under room temperature and pressure conditions. The most important mineral in these rocks at mantle transition zone conditions is wadsleyite.

“The important thing here is that we need to infer the water, the water content within the Earth. Many people have talked about how the earth’s interior can host four, five, or six oceans of water, but we really don't know exactly how much water we actually have, and that is why this research is important. We took advantage to look at the water distribution only in the mantle transition zone, because physiologically it's simpler, it's only made of mainly just two minerals, wadsleyite and garnet. We’ve shown that the water we have right now in the transition zone is significantly less than the 4-6 oceans of water storage capacity people normally refer to.  This is the first-ever global estimation of water, temperature and rock composition variations in a multidimensional way.”