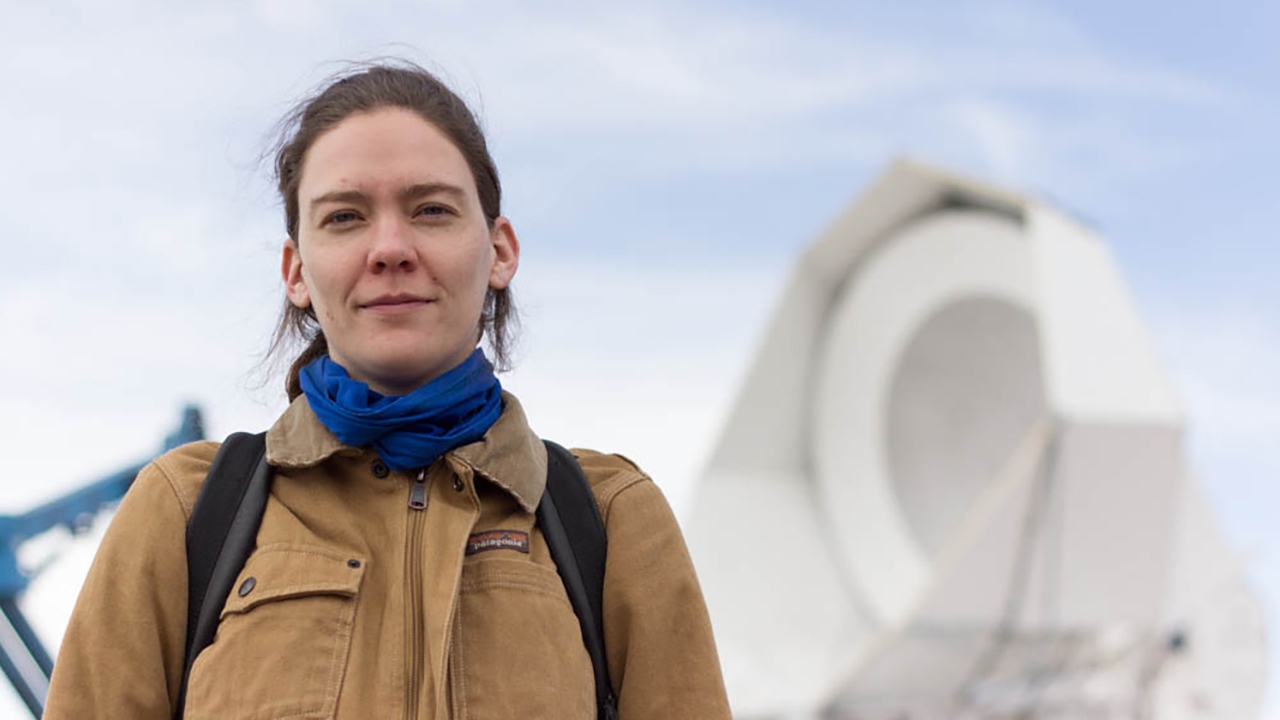 in front of the POLARBEAR-2 telescope in Chile. 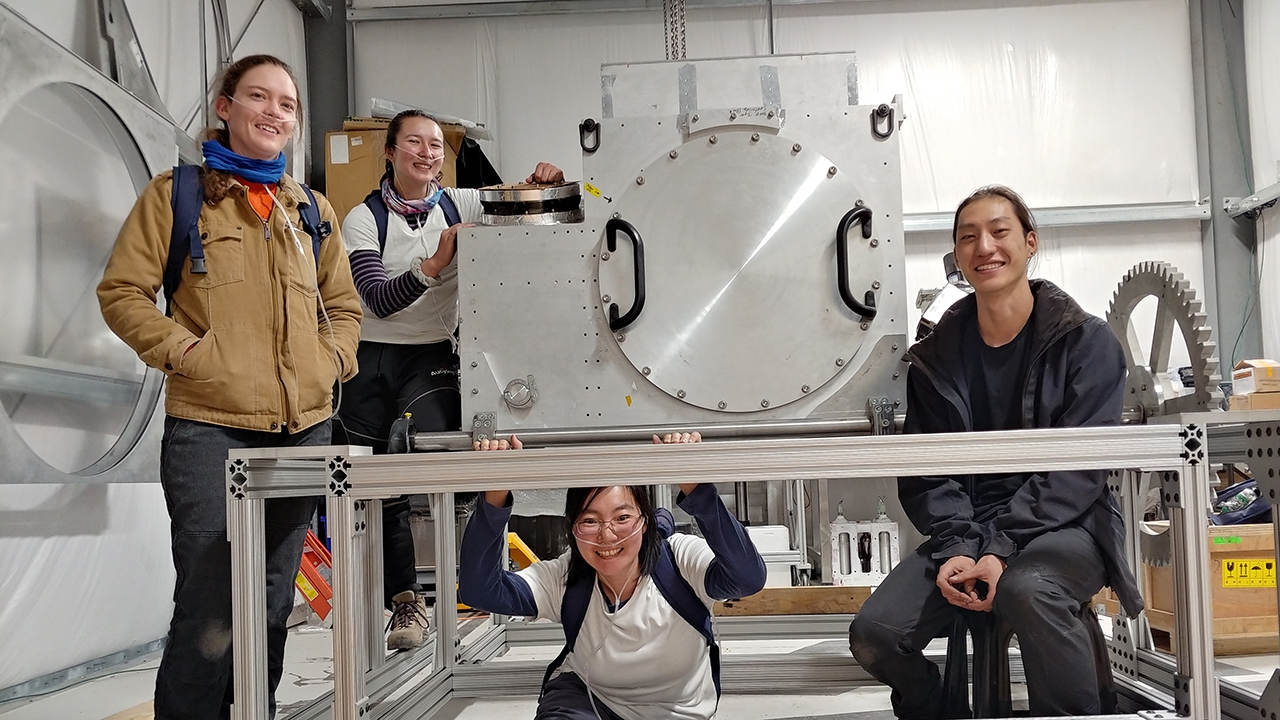 Dr. Lindsay Lowry, Jen Ito and Calvin Tsai preparing the POLARBEAR-2 cryogenic camera for installation on the telescope in Chile. 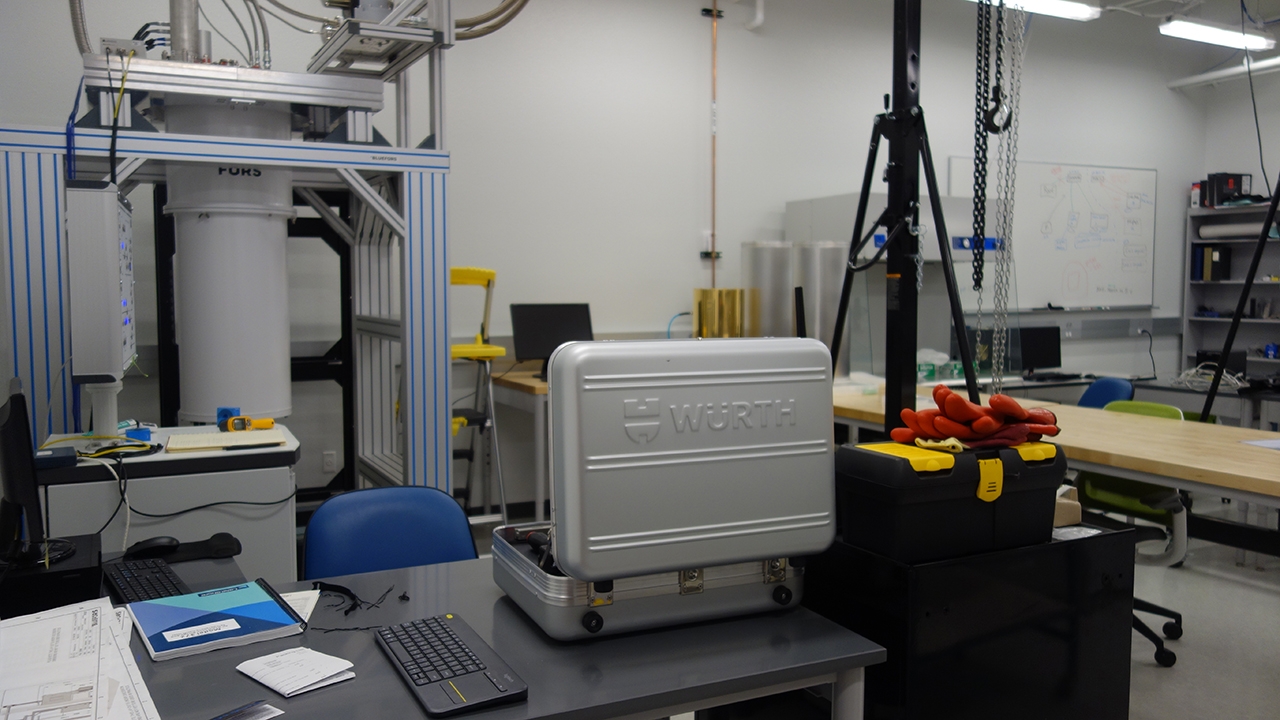 in the PAIS building includes a large capacity dilution refrigerator (at left) capable of cooling instruments down to temperatures within a fraction of a degree of absolute zero for testing and characterization. These cryogenic temperatures are necessary to observe the faint fluctuations in the CMB, and this system is similar to the ones installed on CMB telescopes 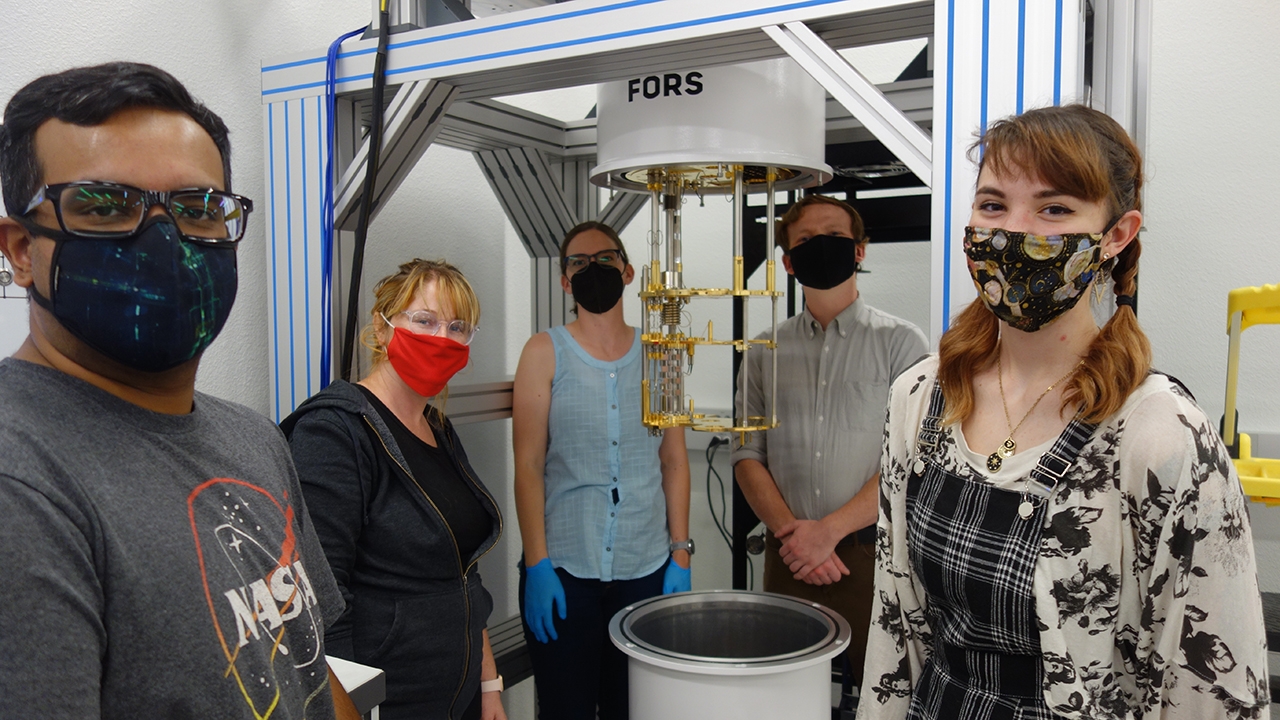 of the Barron Lab are shown with the inside of the dilution refrigerator. From l. to r.: Simon Matin, Katherine Hewey, Darcy Barron, Ian Birdwell and Skylar Urbano.

Research Corporation for Science Advancement, America's first foundation dedicated wholly to science, has named to a diverse group of 24 early career scholars in chemistry, physics and astronomy as recipients of its 2022 Cottrell Scholar Awards. The prestigious list includes The University of New Mexico’s Darcy Barron, an assistant professor in the Department of Physics and Astronomy. Each awardee receives $100,000.

“These exceptional teacher-scholars are chosen not just for their research and educational programs but for their potential to become academic leaders at their institutions and beyond,” said RCSA President & CEO Daniel Linzer. 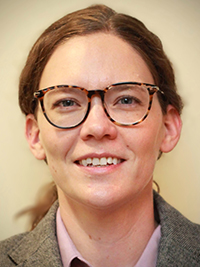 UNM's Darcy Barron was one of 24 recipients of the 2022 Cottrell Scholar Awards.

“As a new faculty member, I have taken science education as another area for me to study the literature and learn from experts,” said Barron. “The Cottrell Scholars award is especially exciting because it is connecting me with a community of like-minded teacher-scholars, including both those at the same career stage as me and scholars with much more experience.

“To be chosen for such a selective award was completely unexpected and incredibly validating. My research and teaching goals are ambitious, and progress can seem slow on shorter time scales, especially over the past two years. This award both affirms that this difficult work is interesting and worthwhile, and also helps me build more momentum towards achieving my goals.”

Barron was cited for her research titled, Enabling Discoveries in Fundamental Physics by Maximizing the Sensitivity of Cosmic Microwave Background Polarization Surveys from Chile. Her research focuses on studying our universe through measurements of the polarization of the cosmic microwave background (CMB).

In the past two decades, three generations of ground-based CMB polarization telescopes have made successive leaps in sensitivity, which led to the detection of the faint B-mode polarization of the CMB from gravitational lensing. Now, the CMB community is in the midst of building and designing the next two generations of instruments, using a combination of proven techniques and new technologies to dramatically expand the sensitivity and coverage of these CMB surveys.

“Our ultimate goal is characterizing microwave polarization over the majority of the sky, with excellent sensitivity at small and large angular scales,” said Barron. “This goal is motivated by outstanding questions in cosmology and particle physics, including seeking evidence of inflation and signatures of new particles and new physics. As we build up these exceptionally deep maps over years of surveying the sky, we will also create a rich dataset with a new view of the transient microwave universe, with potential for new discoveries in astronomy and astrophysics.”

Barron’s research field is highly collaborative, and students get involved in all aspects of the research throughout their Ph.D., from developing hardware in the lab to commissioning it on the telescope through analyzing survey data. This process enables Barron’s Research Group to make such precise measurements by training students to become experts in every aspect of the instruments and the data they produce. The $100,000 award will be used to bring on another full-time graduate student to help carry out this exciting research.

In addition to supporting Barron’s research program, the award recognizes and supports her work in science education, which focuses on expanding opportunities for research experiences within the undergraduate physics curriculum.

“I have my experience as a student and what worked for me, but I know that’s not universal. Pursuing open-ended problems and developing new skills in research outside of the classroom kept me motivated through my physics degrees and allowed me to discover my strengths and interests,” said Barron, who earned her undergraduate degree in engineering physics and a minor in astronomy at the University of Illinois Urbana-Champaign. “Bringing more of these opportunities for discovery into the coursework at UNM can reach a wider range of students and hopefully help them be more motivated and successful.”

Barron also earned her master’s and Ph.D. in physics, both from the University of California, San Diego.

Cottrell recipients are chosen through a rigorous peer-review process of applications from a wide variety of public and private research universities and primarily undergraduate institutions in the United States and Canada. Their award proposals incorporate both research and science education. To read more about each recipient, visit Cottrell Scholars.

As their careers advance, Cottrell Scholars become eligible to compete for several additional levels of funding through the Cottrell Plus Awards. Scholars meet each July at the annual Cottrell Scholar Conference to network, exchange ideas, and develop collaborative projects with potential national impact. This year’s event is scheduled for July 6-8 in Tucson, Ariz.

“The class of 2022 joins an innovative and impactful community,” said RCSA Senior Program Director Silvia Ronco. “We look forward to seeing these latest awardees leave their mark on the face of science and academia throughout their careers.”

The awards are named for educator, inventor and science visionary Frederick Gardner Cottrell, who founded Research Corporation for Science Advancement in 1912. Since the first class in 1994, the Cottrell Scholar community has grown in diversity and now comprises more than 500 awardees.