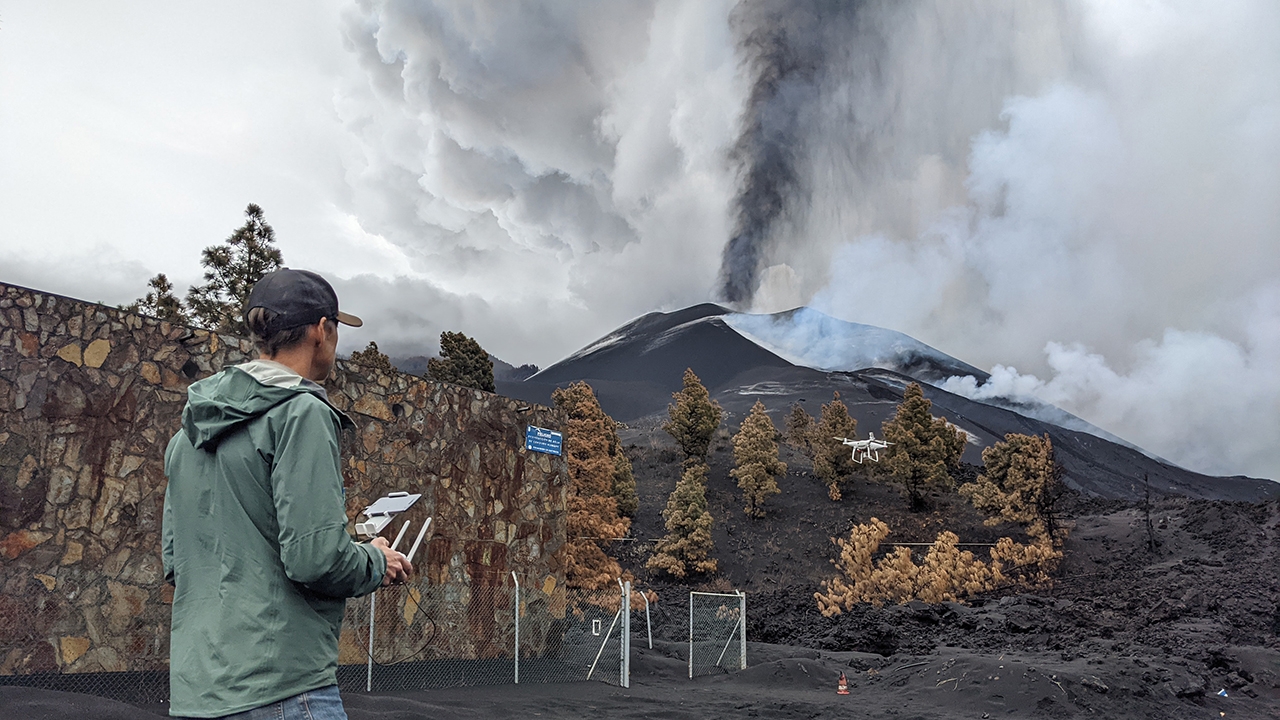 A drone takes off for the erupting Penacho volcano. 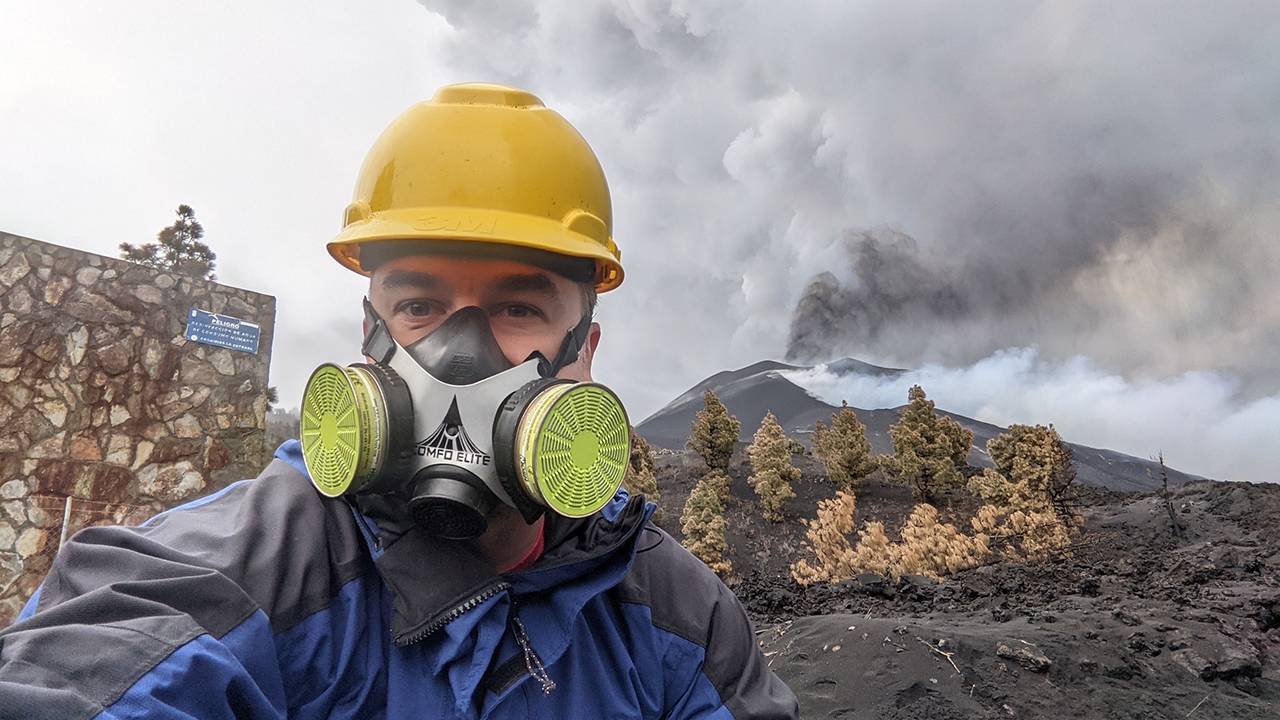 themselves from the noxious gases by donning military-grade gas masks. 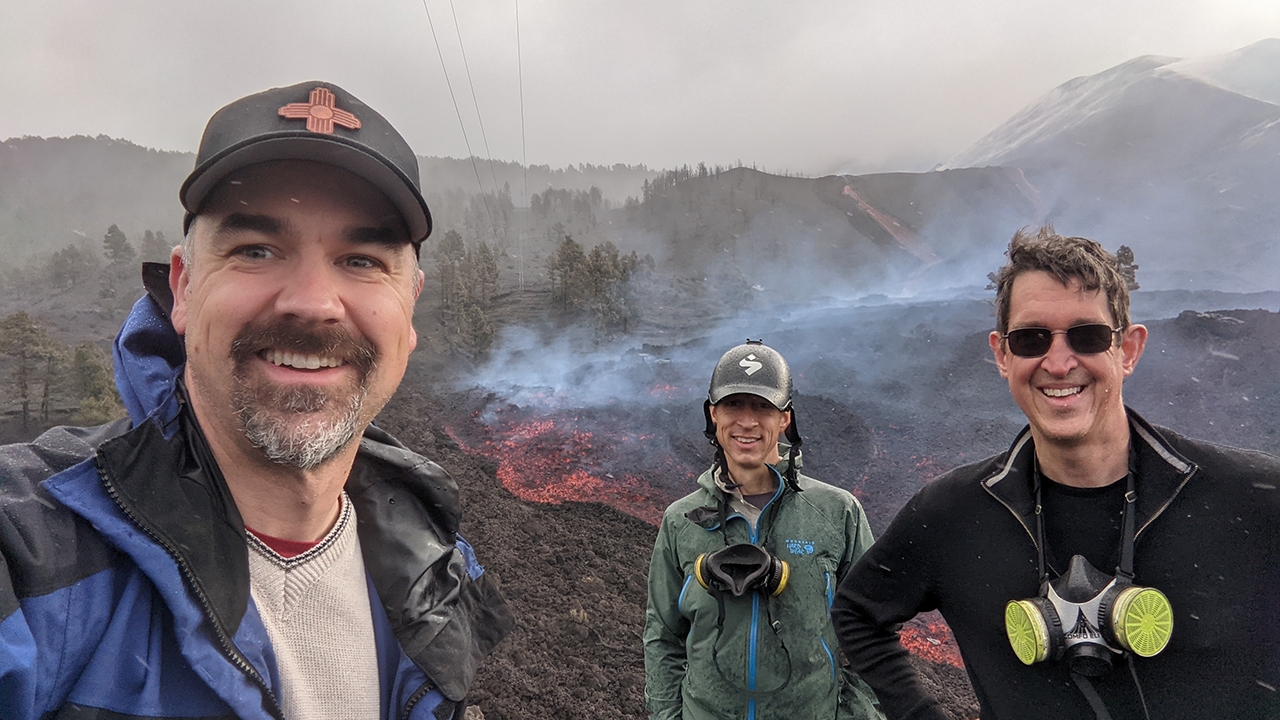 team was awarded a $1.5 million NSF grant to develop novel, bio-inspired software and drones to measure and sample volcanic gases. 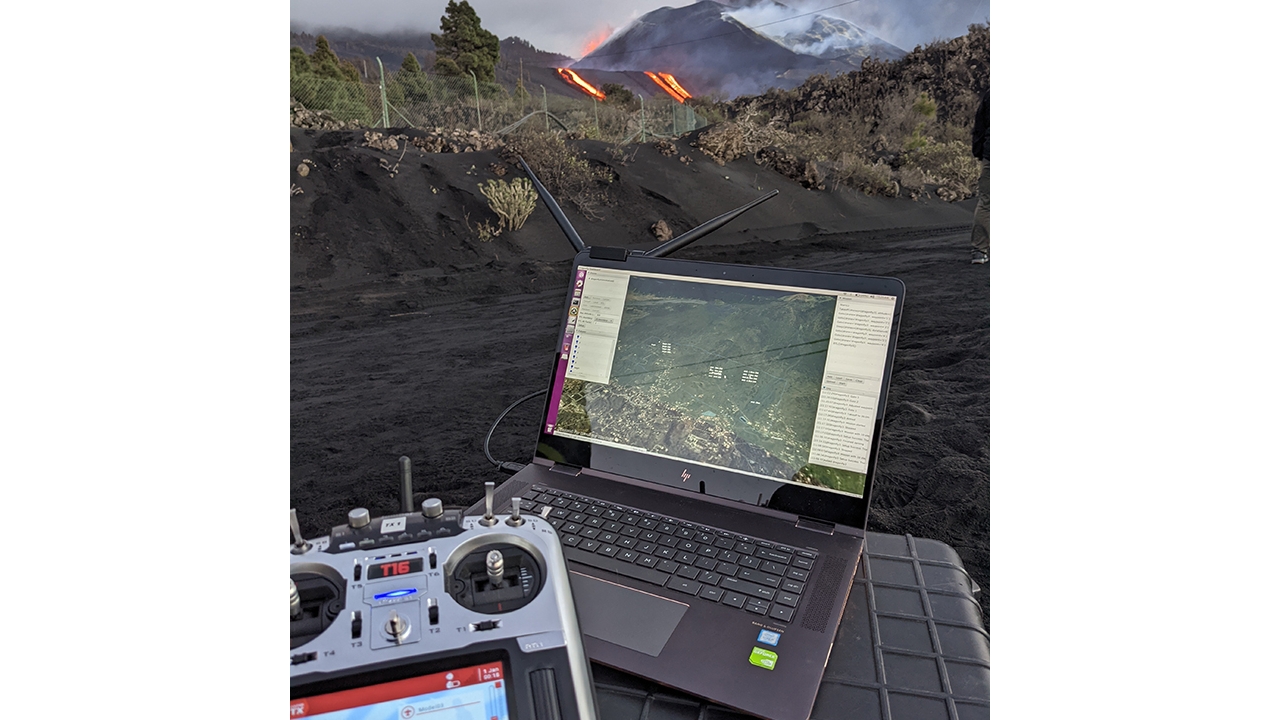 When an interdisciplinary team from The University of New Mexico was awarded a four-year, $1.5 million grant from the National Science Foundation in 2020, the goal was to develop novel, bio-inspired software and drones to measure and sample volcanic gases.

One year later, the Project VolCAN team got a spectacular opportunity to do just that — and make history in the process by becoming what is believed to be one of the first research teams to collect uncontaminated gases from an active volcanic eruption.

In late-November, UNM’s team flew a drone into the erupting Cumbre Vieja volcano at La Palma Island in Spain’s Canary Islands. The eruption, which began in September and ended in late December, is the largest in Europe in 500 years.

Since the fall, volcanic lava flows from Cumbre Vieja have destroyed more than 1,000 homes and covered significant parts of the Western side of the island with ash. The continuous emission of ash from the volcano has resulted in frequent closing of the airport, which along with high sulfur dioxide and aerosol concentrations in the air, makes for hazardous conditions. Frequent earthquakes add to the mix of nature displaying its power.

It is a dramatic and devastating occurrence but was a rare and perfect opportunity for the VolCAN team to put its resources to the test, so they did just that — navigating all the physical and bureaucratic hoops to make their way to the island with five drones and a handful of team members with the mission of collecting gas samples by flying drones into the volcano. The VolCAN team was one of several international research groups working on the eruption of Cumbre Vieja at the time.

"We got uncontaminated gas samples from the plume that told us where the magma causing the eruption was coming from. No one has ever been able to do that during an eruption before." – Matthew Fricke, research assistant professor, computer science

As the research team directed the UNM-programmed autonomous drones into the gas plumes, they protected themselves from the noxious gases by donning military-grade gas masks. But their risky efforts were a success, becoming what is believed to be the first team to sample uncontaminated gases from an erupting volcano for later carbon isotope analyses. This resulted in a treasure trove of data to help better understand the course of the eruption.

“The robot missions couldn’t have gone better,” said Matthew Fricke, one of the principal investigators on the VolCAN project and a research assistant professor of computer science. “We got uncontaminated gas samples from the plume that told us where the magma causing the eruption was coming from. No one has ever been able to do that during an eruption before. That data allows us to try and forecast the duration and intensity of the eruption.” 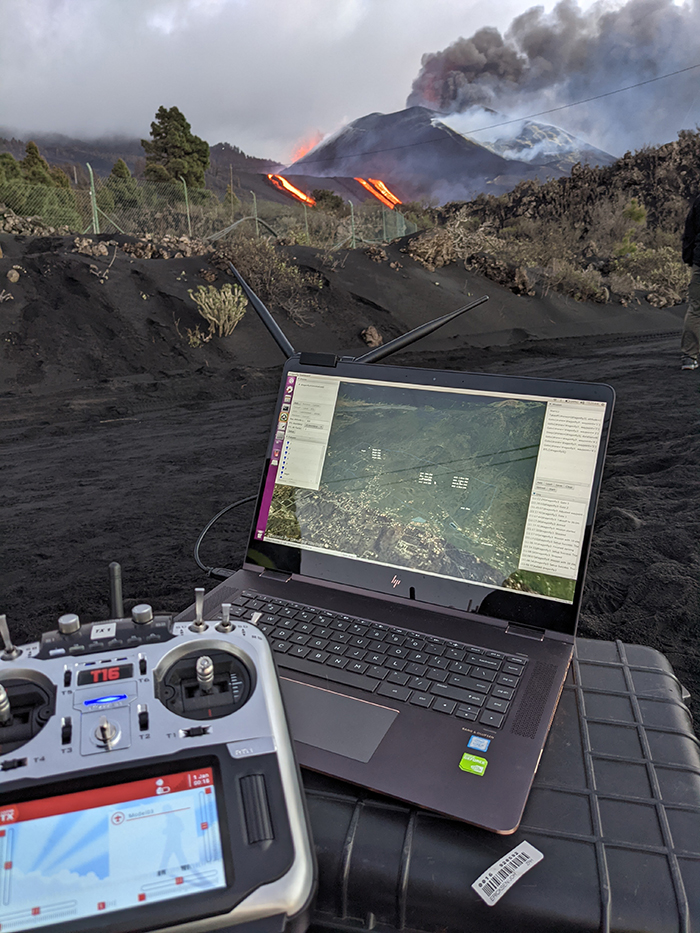 After collecting the gases, the team made CO2 concentration transects of the plume and obtained video  footage of the eruption. These gas samples were analyzed for carbon isotopes in collaboration with and using instrumentation of the local scientists on La Palma. The obtained data provides new insights into the nature and depth of the magma source in near real-time. This information, together with other data collected by numerous scientists from local and international institutions, will result in forecasts about the ongoing and future volcanic activity.

The meshing of various disciplines — ranging from experts in volcano activity, theoretical algorithms, environmental monitoring, drones and sensors — allows the team to accomplish far more than they could do on their own, team members said.

Fischer, a professor of earth and planetary sciences, specializes in volcanology with an emphasis on active volcanism. He keeps up on active volcanoes around the world and is always looking for new ways to analyze emitted gases and particularly CO2 levels, which give important clues into the intensity and likely duration of a volcano. Fischer said the VolCAN project came together around 2017 after he read about Melanie Moses’ work in the NASA Swarmathon, which involves programming robotic vehicles to communicate and interact as a collective swarm. When he learned about the “swarmies,” he immediately imagined the possibilities of a collaborative project involving volcanoes.

The swarm consists of multiple autonomous aerial drones that use algorithms inspired by biology to monitor the unpredictable environments surrounding volcanoes. This project will develop, analyze and rigorously test a co-robot swarm of unpiloted air vehicles (UAVs) that collect valuable scientific data in dynamic and unpredictable environments. The VolCAN swarm will use bio-inspired algorithms to detect CO2 plumes, descend plume gradients to measure maximum flux of CO2  from ground sources, estimate plume size and infer maps of multiple CO2 sources over hundreds of square kilometers.

“The collaboration is driving the progress,” Fischer said. “We would have never been able to do this kind of sensing work on our own.”

There are an estimated 500 volcanoes that emit volcanic gases to the atmosphere around the world, so there are many future expeditions the VolCAN team could make. In addition to monitoring gasses that precede volcanic eruptions, thereby protecting human lives, it will also measure how much carbon dioxide is emitted from volcanoes to better understand how they contribute to the global carbon budget. The VolCAN swarm can adapt to environmental conditions autonomously in real-time, and it can also be guided by scientists to collect scientific data during the battery-limited flights of small drones, Fricke said.

“Our approach leverages the advantages of bio-inspired algorithms that are fast rather than perfectly accurate, and resilient rather than centrally controlled,” Fricke said.