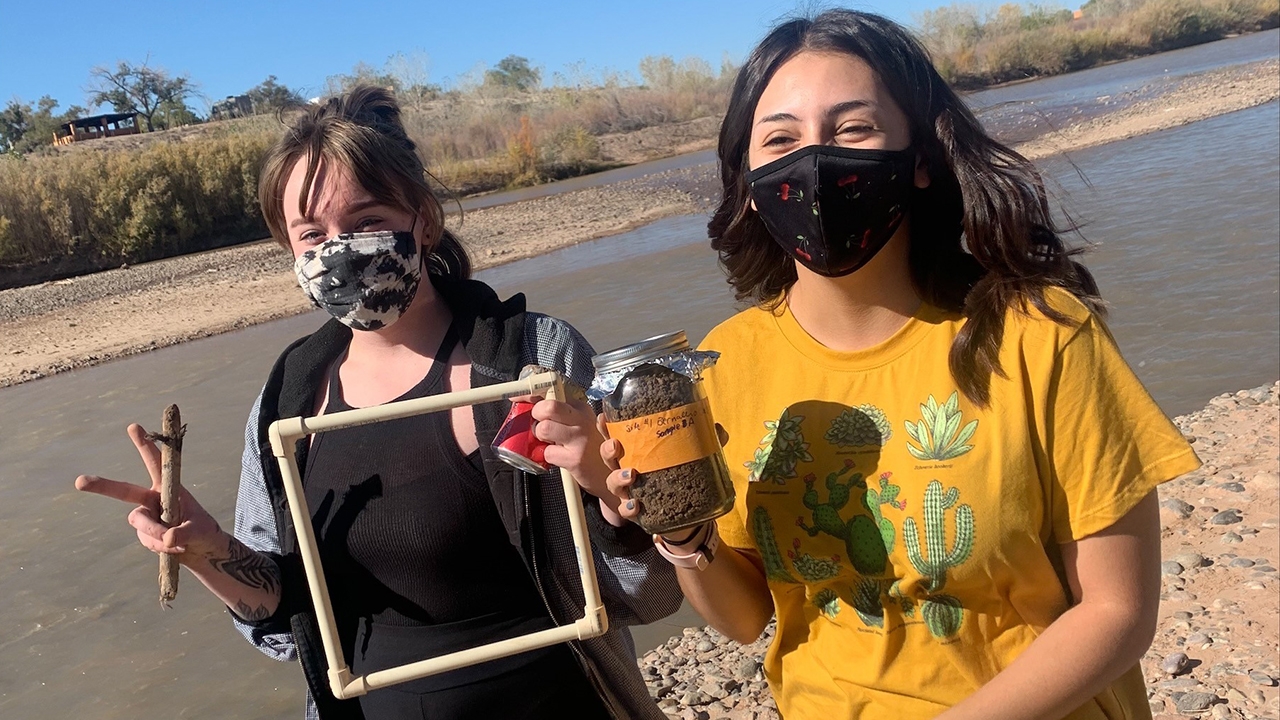 samples collected as part of research. 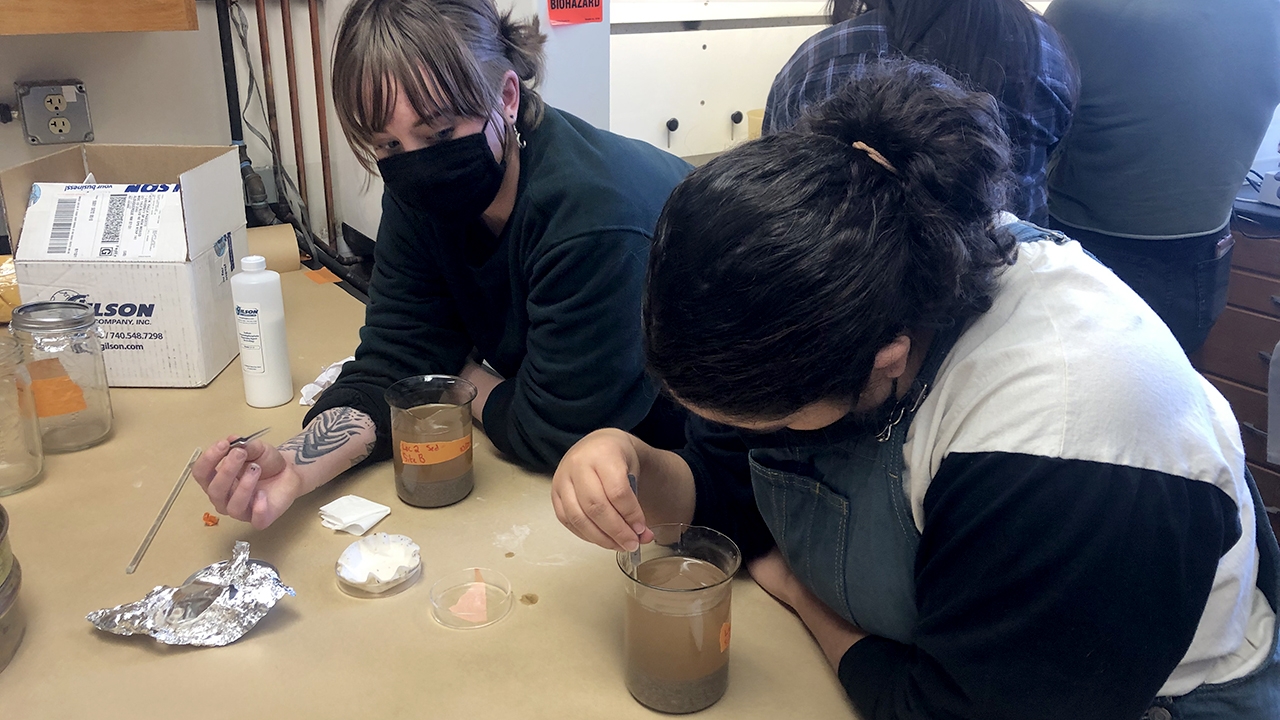 In the course Water in Earth Systems,

students actively make discoveries, do their own research, design their own methodology and learn the scientific process through research experience.

At The University of New Mexico, many instructors of required STEM courses utilize field-based undergraduate research experiences to improve student understanding and innovation. In these courses, instructors prepare and guide students in solving important problems. As a result, students learn to do science, rather than just learning about science.

UNM Earth and Planetary Sciences Professor Gary Weissmann puts that idea into action in Water in Earth Systems (ENVS 323L), a course required for environmental science majors. This course is one in a series of Environmental Science courses that employ course-based undergraduate research experiences (CURE). In this course, Weissmann encourages his students to be genuine innovators and to expand beyond the existing knowledge in the field. He helps students actively make discoveries, do their own research, design their own methodology, apply it in ways they determine to be best, and learn the scientific process through this research experience. 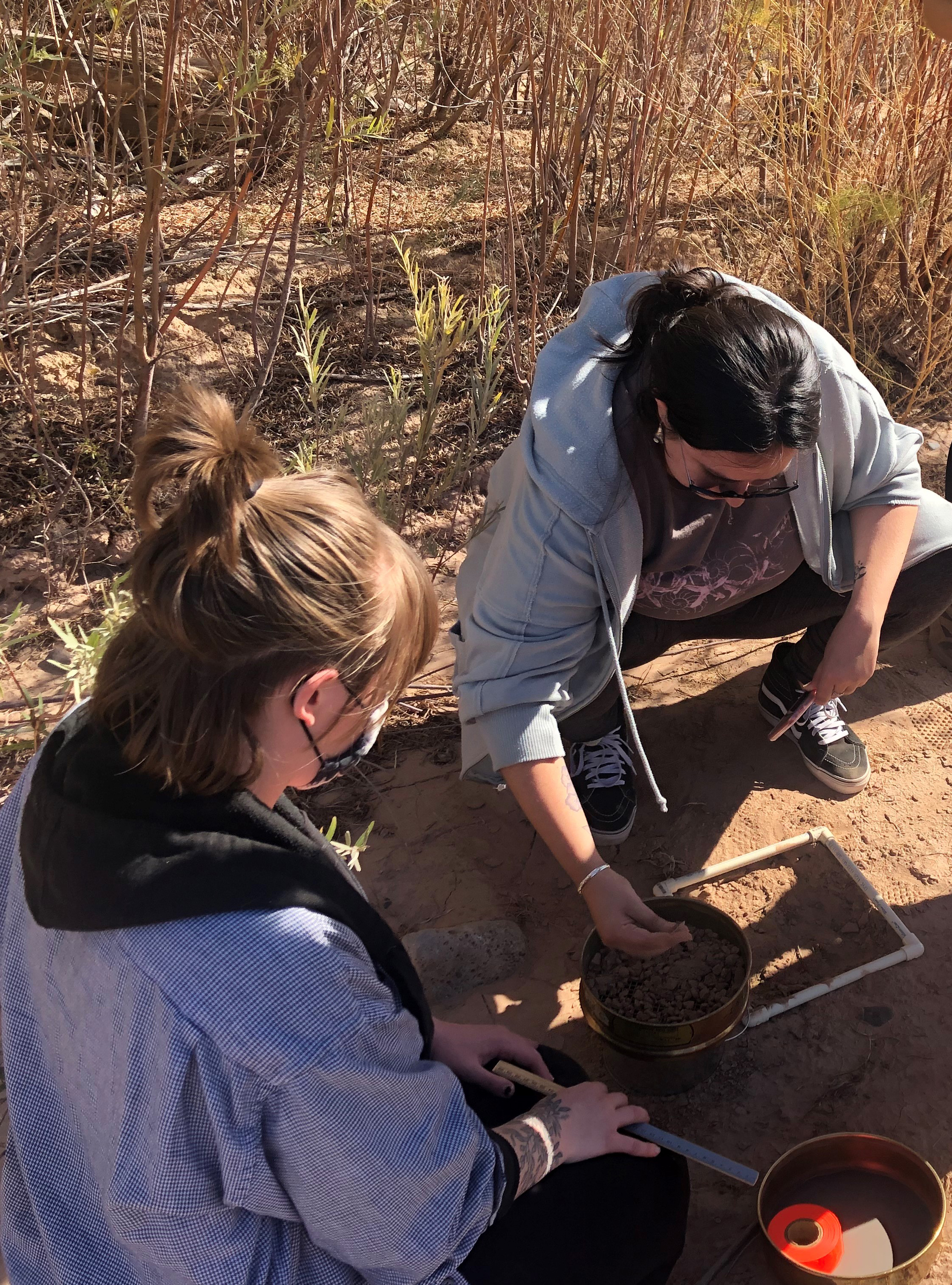 Students gather samples in the field as part of the Water in Earth Systems course in the Department of Earth and Planetary Sciences.

Weissmann focuses on a single real-life issue for the entire semester— a problem that is relevant to the students’ own lives here in Albuquerque. He describes this approach as asking a “community-based question.”

During the fall semester this year, Weissmann’s class studied whether microplastics are present in the Rio Grande and if microplastic amounts increase through the City of Albuquerque. There is no set experiment, no pre-determined results, and no specific required analytical methods, instead, the students evaluate the literature on microplastics to design and implement the experiments. Weissmann does not know how the research will play out in the end, or what conclusions students will draw.

Issac Martinez, a student in the course, says that “the coolest thing about the class is that it’s student-led… it’s never been done before, so there’s nothing we can really look at to copy. Usually in school, they give you the script and you follow the script but we’re making the script, and that’s really cool… we’re figuring it out as we go, but that’s just part of it. It’s a new front in science.”

In the course, students design their own procedures and create new pathways in the field of environmental science, building on what has been done before. They are involved, active researchers making a genuine contribution to the environmental community.

“It is important because we’re building a new data set. Microplastics are a very hot topic in environmental sciences right now, and not a lot of research is focused on freshwater systems, especially here in the high desert near the Rio Grande,” says student Isaiah Mezza. “We are building this dataset from scratch, it’s something that hasn’t existed before.”

The students are making valuable scientific contributions, but also, in Mezza’s opinion, “it’s really fun. It was a lot of fun to go out to the river… I think it’s important to society as a whole, and it’s also a lot of fun.”

Because the overarching research question concerns a problem that has the potential to make a positive impact within the real world, students gain genuine, real-life experimental, research, and analysis skills and abilities that are vital in any kind of science-related career. Weissmann simply asks the question, lets his students figure it out, and guides them through the process.

Student Stephen Sanders says that “the biggest challenge was, not only that are we designing our own experimental procedure for this research, but we’re doing it in a field that’s a forefront of environmental science, so a lot of these methodologies and procedures that we’ve read about preparing for this experiment weren’t fleshed out.”

The experiments do not have bumpers or training wheels, and things do not always go according to plan. Sanders recalls that “as we were conducting the experiment there were a bunch of things that happened that we didn’t plan on and were hard to control for,” like lost and destroyed samples. Hiccups arise, difficulties are encountered. But this is an important element of the class: to figure out “how to do science” on their own, to learn how to overcome unexpected results and to keep moving forward.

If this sounds intimidating, don’t worry. Failure is inseparably tied to science and discovery. You cannot do science, you cannot make discoveries without failing, or finding out the way things are not. This class helps you learn from failure so that you can keep moving forward. You’re enrolling in a class, but you’re also opting into an experience where you will be making new discoveries.

Student Sarah Ann Polsin says that they have “just been us figuring things out” and that all the experiments were “student-led… it was all designed by us, all the samples were collected by us… we decided how we were going to do it.” Knowing how to find answers on your own, being able to teach yourself, and being able to figure out solutions if they don’t already exist, is the whole goal of the course. These are much needed qualities in any field that requires research and design and are the very kinds of practices that will help students to go far.

Weissmann has found that because the students design the research and the work is in context with a real-world problem, the class employs a “Multicontext theory” that promotes different approaches to science. It encourages individual students to use their unique strengths, ways of thinking and world views in a team environment, allowing for greater inclusion. Everyone’s approach has value and a purpose,

The benefits of the course are multidimensional: students gain real-life fieldwork, make genuine discoveries, do authentic research, and leave better prepared for their field of study. Students are able to ask and answer their own questions. Most importantly to Weissmann, students “learn how to learn.” In this course, do not expect to be told the answers because Weissmann doesn’t have them! But what you do learn will be invaluable to the field of environmental research, and essential to your future as a researcher and scientist.