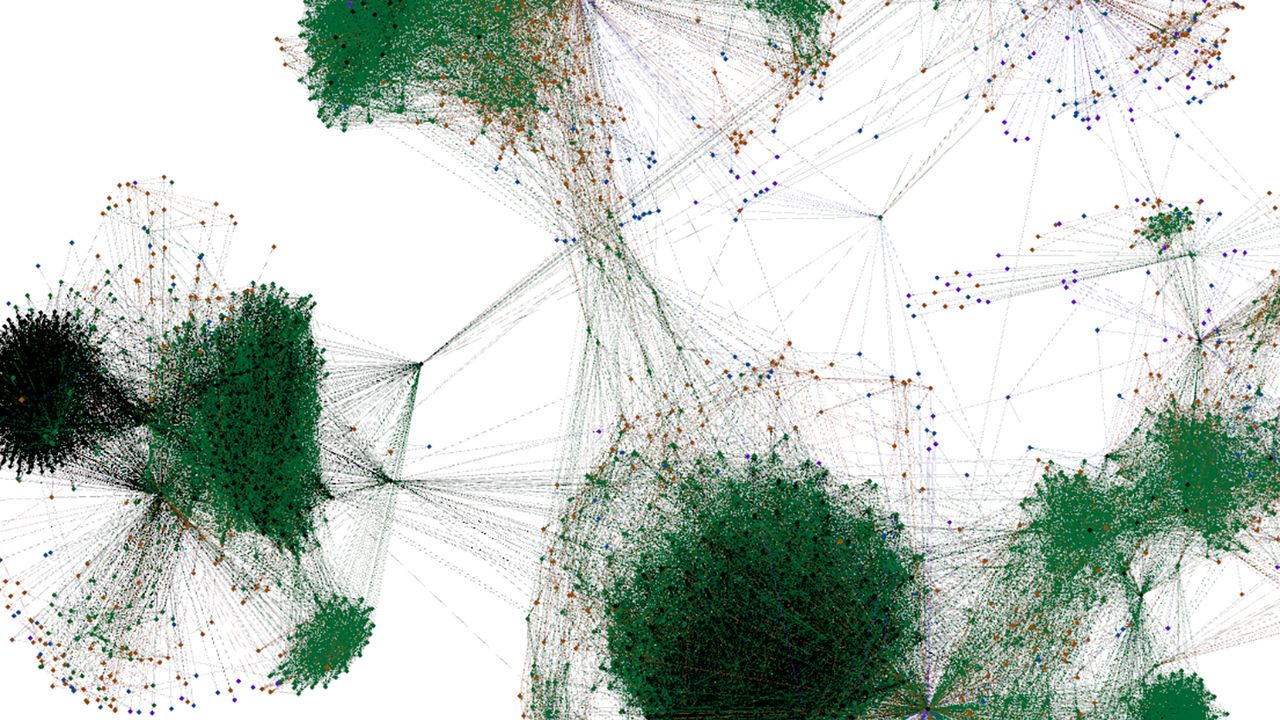 A graphical representation of a swath of Facebook users illustrates the distributed nature of this research. The nodes represent Facebook accounts and connections represent friendships.
Credit: Isaac Klickstein 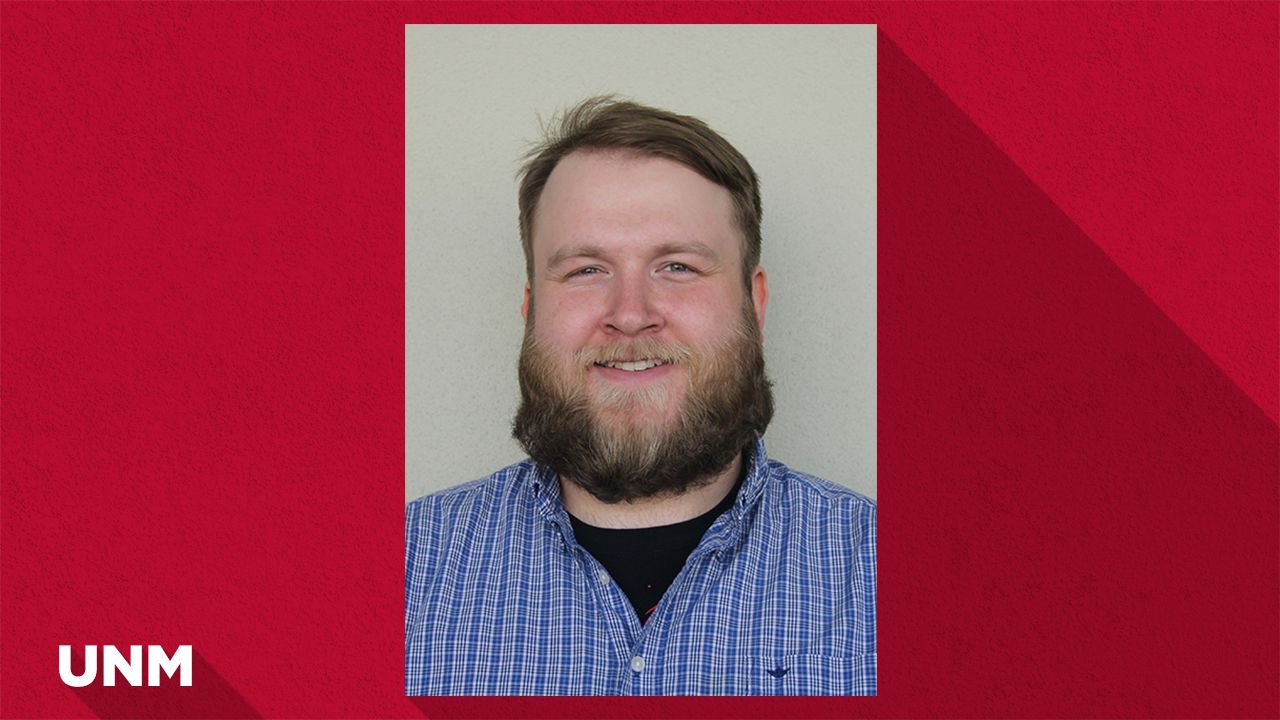 It is human nature to seek to spend the least amount of energy, time and cost on any given task to achieve a desirable result, whether that is working out at the gym, finding the best path to travel to work or buying cereal at the grocery.

Now University of New Mexico researchers have discovered through complex numerical modeling a method that could lead to ways to more efficiently perform a variety of tasks and processes, from drug delivery to advertising.

Francesco Sorrentino, UNM assistant professor of mechanical engineering, is the author of an article that recently published in Nature Communications called “Energy Scaling of Targeted Optimal Control of Complex Networks.” Co-authors on the paper are Isaac S. Klickstein and Afroza Shirin, both graduate students in the Department of Mechanical Engineering.

The research group examined the problem of reducing the energy consumption when trying to control a large distributed system, such as the power grid, the food web or the Internet.

“It’s a very general type of problem,” Klickstein said. “We’re looking at how to reduce the energy or effort required to reach a certain goal. For instance, how much money do you need to put into a certain advertising campaign? Or if you’re an environmentalist, how much government regulation do you need to implement in order to increase animal populations. Our focus is to reduce the amount of effort or energy required.”

Klickstein said one of the most useful findings from the research, which spanned about two years, was that the effort can be reduced dramatically by simply focusing the goal of the control action toward only the elements that you care about most rather than the more traditional outlook of monitoring all elements.

“By keeping track of everything, the energy you must expend increases exponentially,” he said. “Instead, we say focus your action on only a few parts, say the population of one animal species or the power generation for one neighborhood. And what we’ve found with our research is that what you do for that small part will affect everybody else without having to focus on the whole population, so the level of impact can be determined and then used to make the decision whether that is an acceptable change.”

The concept is similar to using a sample size in a survey: If the goal is to survey those making $50,000 a year, the most efficient way is not to survey everyone, then go through all the data and just pick up the subset you’re interested in, but to focus your efforts initially on the group you’re interested in, Klickstein said.

He said the issue of applying a control action to influence a system has been a popular research topic, with most of the effort being put toward spreading a control action over more of the network (such as every single house that feeds into a power grid), but costs can be prohibitive with that kind of focus.

“We chose to keep the amount of locations of our control actions small and instead reduce the number of elements in the network we care about,” Klickstein said. “And lo and behold, we ended up seeing that we get essentially the same type of behavior by removing control action goals as previous papers got by increasing the number of control action locations.

This is significant because it proves that you can approach a problem in two different ways and get similar results, but ours is a cheaper solution,” said Klickstein. “You get all the benefits of having a few control locations (such as reduced cost and effort) but you get the benefit of accomplishing whatever task you want to.”

Sorrentino said that another significant finding of the research is that it now becomes possible to control systems that may not have been possible with past methods.

“If you request an action that is too large, you might not be able to do it at all, such as injecting too much energy into the power grid. Plus it is often cost-prohibitive,” he said. “By restricting the number of elements we care about and finding that the energy is reduced exponentially, we can make controlling this system visible whereas it would be invisible otherwise.”

Shirin said the next step in the research is to apply the theories to real-world systems, such as looking at biological systems as applied to the food web.

“There are a lot of species of some animals, but some of these species are going to waste while others are going extinct, so our goal could be to save a particular species,” she said. “This research will allow us to control just the portion we want to study, not the whole population.”

Klickstein said that with the continued advances in technology, making systems more and more interconnected, their research findings will become more relevant.

“The work we have done is very theoretical, but I do see there can be applications,” he said. “From self-driven cars to cloud storage to the smart grid, everything is becoming more distributed. These are systems that will need to perform complex operations, and it can’t take a lot of time. It can’t require a lot of effort. This type of directed control action I believe will help drive more efficient algorithms in the future.”

The group has recently started working with a group in biology that is working on drug development. Klickstein said that the hope is that their findings could give those who develop drugs information about what is needed for drugs that can be more efficient and targeted.

“We’re hoping we’ll be able to say, ‘Here are a few theoretical drugs. If you can develop these, we can promise you these are the best drugs,’ ” he said.

Although this research is all in the programming realm, another research group at UNM will be building a small play network using Arduino microcontrollers that will be able to test some of the theory.

“This will allow us to study problems we couldn’t study in real life, like the power grid or the food needed for a species to survive,” he said.

They are also hoping to connect with other research groups at other universities so their work can be applied to a variety of systems.

“It will take a lot of tuning of our work to apply to any specific system, but the possibilities are definitely out there,” Klickstein said.