The 36th annual edition of Scribendi was unveiled at the Western Regional Honors Council (WRHC) Conference last month and was a key feature of the opening night of the conference, held at Hotel Andaluz.

Scribendi is primarily produced by Honors students at the University of New Mexico (UNM) Honors College—however, in 2016-2017 the magazine introduced its first exchange student, and two more for the 2017-2018 school year. Now, it publishes creative work from undergraduate Honors students from more than 200 institutions in the WRHC. 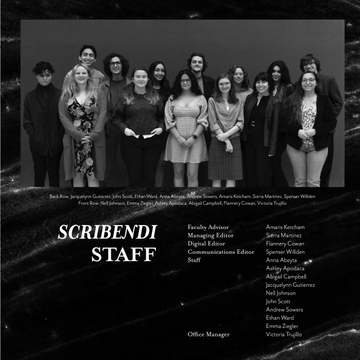 The WRHC Conference brings students in participating honors programs together from across the nation: 300 students, staff and faculty from 50 institutions attended. Scribendi published the majority of its art and literature from schools outside of The University of New Mexico, and the release party was an opportunity for the staff to meet the faraway contributors whose work they’d been pondering since fall.

Although not all 41 contributors featured in the 2022 edition of Scribendi were able to attend the conference and present their work, 10 artists and authors shared their pieces and creative process with an enthusiastic audience that included Scribendi staff, Honors professors, friends and family.

Issues of Scribendi can be found around the UNM Honors College or can be shipped for a small fee.