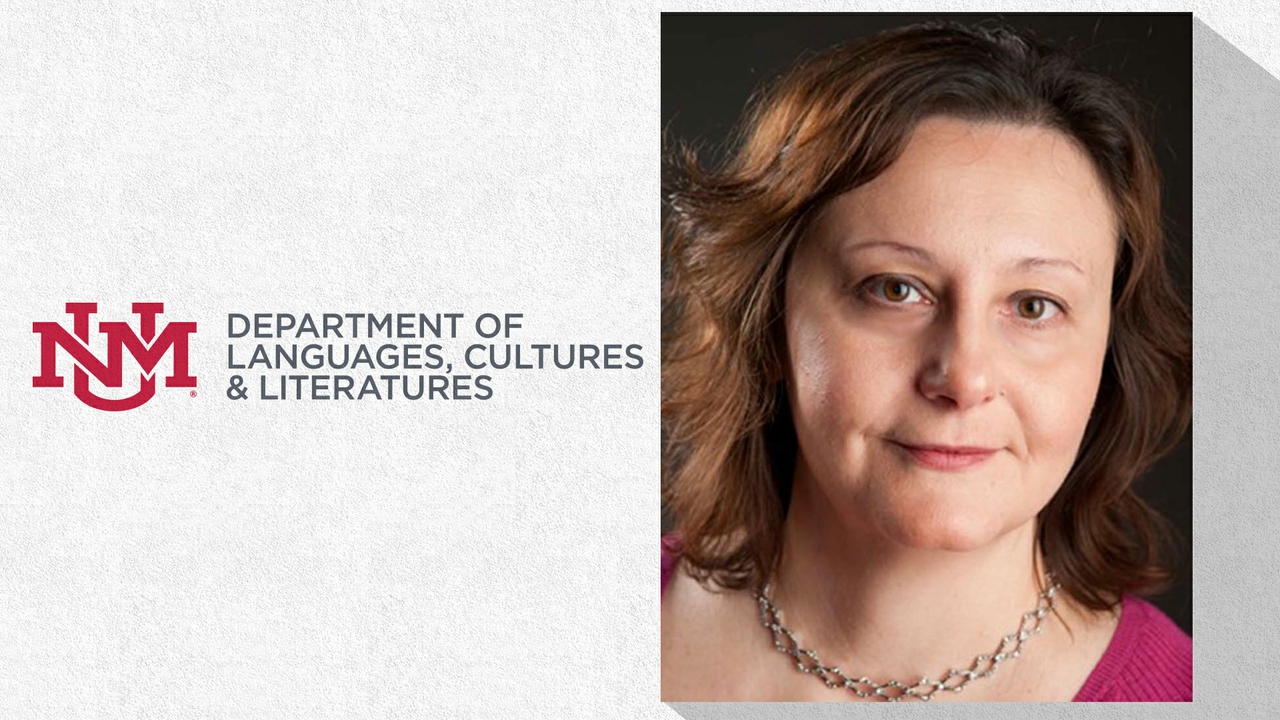 Tanya Ivanova-Sullivan, associate professor of Russian in The University of New Mexico Department of Languages, Cultures, and Literatures, has been selected as a Fulbright U.S. Scholar for 2022-2023.

Ivanova-Sullivan’s research is in the area of psycholinguistics of Slavic languages, specifically, Russian and Bulgarian.

The Fulbright award will give her the opportunity to conduct a psycholinguistic study with native speakers and second-language learners of Bulgarian at Sofia University in Bulgaria in the Fall 2022.

“The study focuses on the interference effects caused by mismatches of grammatical features in the production and comprehension of sentences, as for example, the mismatch in number between ‘the key’ and ‘were’ in the sentence ‘The key to the cabinets were rusty’. These mismatches, called ‘agreement errors,’ are found both in spontaneous speech and in well-edited texts,” she explained. “They can disrupt the way speakers produce and process sentences, increase the cognitive load on the language processor, and generally, test the limits of the working memory. Studies of interference effects can provide us with knowledge of the precise nature of the mechanisms of memory retrieval, one of the central phenomena in human sentence processing.”

Ivanova-Sullivan noted that at present, interference phenomena have been studied mostly in Germanic (English, Dutch and German) and Romance (Spanish, French, and Italian) languages. However, the results of these studies do not present a conclusive answer to the question of the universal nature of agreement errors.

“This is where data from Bulgarian, an under-studied language, can offer some insights. Bulgarian has rich morphology featuring number and gender agreement, which makes it an excellent case for investigations of agreement phenomena. The eye-tracking data I will collect from Bulgarian during my Fulbright visit will help address not only the immediate question about the way speakers process sentences under interference but also the more general issue about the underlying principles of the cognitive architecture of human language. My findings will inform theoretical research and have implications for second-language learning and language-related disorders,” she continued.

In addition, Ivanova-Sullivan will teach a seminar on psycholinguistics, which will introduce Bulgarian undergraduate and graduate students to the goals and methods of contemporary psycholinguistics.

Her Fulbright scholarship will be instrumental for pursuing experimental work on linguistic phenomena that provides answers to fundamental questions about language structure and processing, she said.

“Conducting the study in-person after a long COVID-related hiatus is an opportunity for me to collect and analyze eye movements data,” Ivanova-Sullivan remarked. “The eye-tracking paradigm is an ecologically valid method in reading tasks because it resembles the way people read in real life. This method offers great advantages for tapping into the implicit linguistic knowledge of speakers without placing an extra processing burden on them. Using this method in my study will advance our understanding of the way speakers identify and react to grammatical violations in a sentence: Do they try several times to parse the sentence, stay fixated on the violation, or simply ignore the violation and continue to the next sentence?”

“My scholarly and teaching activity during my Fulbright visit will open the door to collaboration between students and faculty at Sofia University and UNM not only in the area of linguistics but also in other disciplines of Humanities and Social Sciences,” she continued.

Ivanova-Sullivan said that as a member of the European Union, Bulgaria is diversifying and strengthening its research force, which attracts an increasing number of students and scholars from Western European countries and North America.

“As an American scholar of Bulgarian descent, I welcome the opportunity to engage more closely with students and faculty at Sofia University, an experience that will bring mutual benefits and advance our scholarly perspectives.”

“We hope that University of New Mexico-Main Campus can utilize Ivanova-Sullivan’s engagement abroad to establish research and exchange relationships, connect with potential applicants and engage with your institution’s alumni in the host country,” said Ethan Rosenzweig, Fulbright’s deputy assistant secretary for Academic Programs.