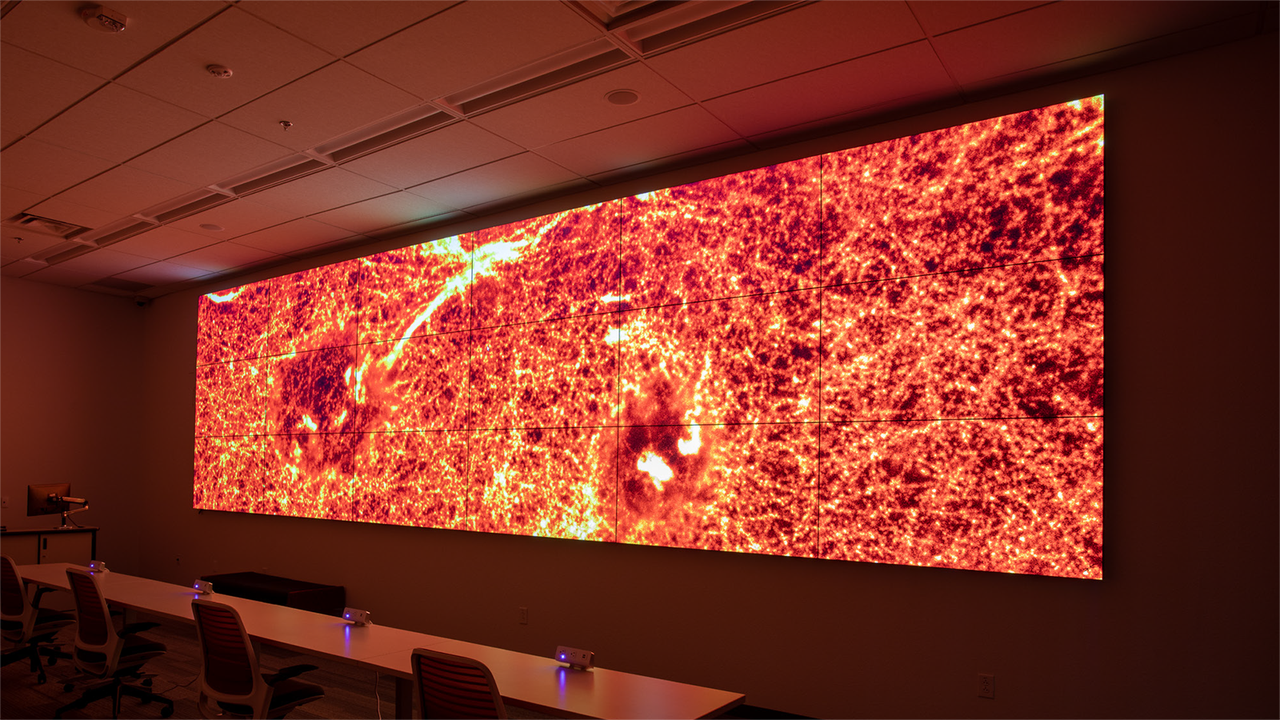 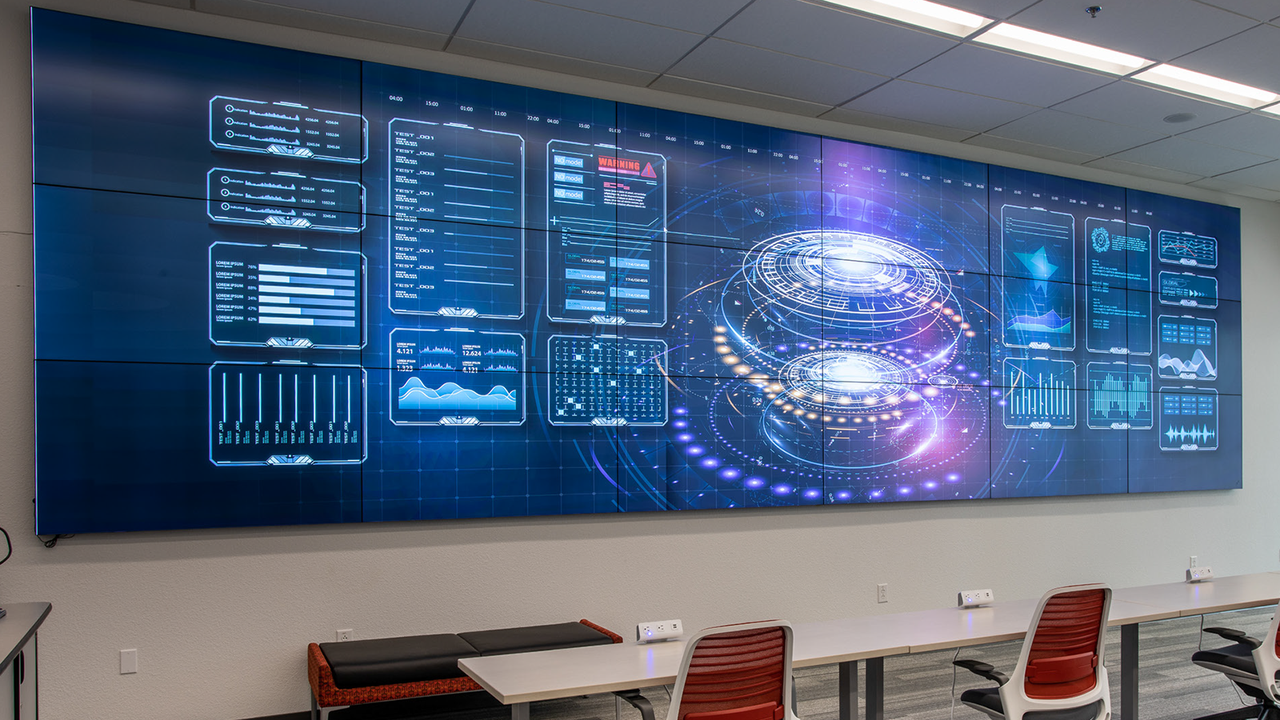 With the use of the

Visualization Lab, UNM researchers will be able to interpret and analyze data like never before.

The University of New Mexico (UNM) completed construction on its new Physics & Astronomy and Interdisciplinary Science (PAÍS) building, a $67 million project that is already changing the way research is conducted on campus.

A project over 20 years in the making, the PAÍS facility houses the Department of Physics & Astronomy along with the new Interdisciplinary Science Cooperative (IS Co-op). Every detail within the 137,000 square-foot facility—from collaborative meeting spaces to labs with open floor plans—is dedicated to encouraging interdisciplinary education and research.

The PAÍS facility merges a broad range of academic disciplines with the goal to inspire and expand upon new and existing collaborative partnerships. In addition to classroom, lab and administrative spaces for Physics & Astronomy, seven centers and core labs are dedicated to the IS Co-op: the Center for the Advancement of Spatial Informatics Research and Education (ASPIRE), the Computational and Genomics Laboratory (CGaT), the Center for Comparative HuMan Primate and Physiology (CHmPP), the Center for Quantum Information & Control (CQuIC), the Center for Stable Isotopes (CSI), the Laboratory for Magneto- optical Spectroscopy and the Nanomaterials Characterization Facility (NCF).

“The common thread among the IS Co-op labs is that they either produce or analyze very large quantities of data,” said Christopher Lippitt, faculty coordinator for the IS Co-op, director of ASPIRE and associate chair and graduate program director for the Department of Geography and Environmental Studies. “Big data analytics or data-to-knowledge was actually the organizing concept behind the IS Co-op. They all do large-scale computing or create large datasets that lend to computational analysis.”

To analyze big data, Lippitt said one of the few universal methods is visualization.

“It’s a technique that gives us a starting point to understanding patterns in data,” he said. “We can use visualization to triangulate how we develop algorithmic approaches to interpreting data. And it’s also a way—both physically and intellectually—to unite a lot of people around a common set of resources and capability.”

To that end, the Visualization Lab was built in the PAÍS building to provide a new cutting-edge resource for large-scale visualizations. In creating the lab, the underlying objective was to allow researchers to achieve never-before-seen levels of detail corresponding to the increasing droves of data they work with (think DNA sequencing, molecular and atomic structures, or social media activity). To achieve the sheer level of visual detail the researchers imagined, a unique solution was required to allow them to display an incredible number of pixels simultaneously. In fact, at the time the Visualization Lab was being designed, what they were envisioning was so unique it didn’t even exist yet.

At the bleeding edge of possibility
UNM’s search was focused on the ability to render extremely big and complex data sets so that they are visible to the human eye.

The limiting factor that they were up against was pixel density. “Up until very recently, video displays were constrained to 1080p per screen,” Smock said.

"We view it as a world-class visualization resource and a new capability that will be very important for research and discovery going forward." – Professor Christopher Lippitt

At that resolution, visually representing what the researchers had in mind would require a video wall of colossal proportions, something that was neither economically nor practically viable. The other issue was bezel size—they needed a video wall technology with the tiniest of bezels.

“The challenge was that no one had a monitor that could meet our specs,” Johnson said. “Talking with wall processor manufacturers, none of them had anything that would support this either.”

As they continued to push forward, the UNM team became interested in the potential of using a networked AV solution with 4K video wall technology. But that presented a secondary challenge: how to move 18 4K streams of video from a massive, third-floor server down to the Visualization Lab, on the first floor.

To address this, the UNM team engaged audio-visual integrator AVI-SPL, which supplied a Creston networked AV solution and began working with UNM’s IT team to design a network for video transport.

Still, they didn’t yet have a suitable display technology.

“When UNM approached us, they wanted a video wall with 70-inch 4K panels and the narrowest of bezels, but nobody actually made a display fitting those criteria,” said AVI-SPL Audiovisual and Acoustics Specialist Adam Babb. But then, in June 2019, Planar announced an expansion to its Clarity® Matrix® G3 LCD Video Wall family with the introduction of a near seamless, 65-inch screen in native 4K resolution. That gave the team what they were looking for.

The full pixel map of the Clarity Matrix G3 video wall is 24K wide by 6K tall (23,040 pixels by 6,480 pixels). “The server has been configured to leverage that density,” Babb said. “With the horsepower of the server generating 18 4K data streams and sending them to the video wall on a one-to-one, pixel-for-pixel basis, one image can map the entirety of the video wall.”

That creates one of the largest displays in the world in terms of pixel size. “I’ve never had access to a screen that can display this many pixels simultaneously, and neither has anyone else I know,” said Lippitt. “We view it as a world-class visualization resource and a new capability that will be very important for research and discovery going forward. As we seek to use artificial intelligence and computing to understand or optimize aspects of our world, visualization will play a critical role in our ability to leverage the vast, untapped knowledge contained within the zettabytes of data that are available.”

With Clarity Matrix G3, the researchers’ impressions have been nothing short of spectacular, according to Smock. “The display is crystal clear, and it works very well with the Crestron NVX gear,” he said. “We’re able to easily switch between layout modes and reconfigure the spave as need to display a single massive image or numerous smaller ones.

Leveraging these technologies, Smock added, will allow UNM researchers to interpret and analyze data in a way that’s never been done before. “One of the coolest parts of this new capability is that we don’t know what discoveries can be made, which is really the nature of why a facility like this exists.”