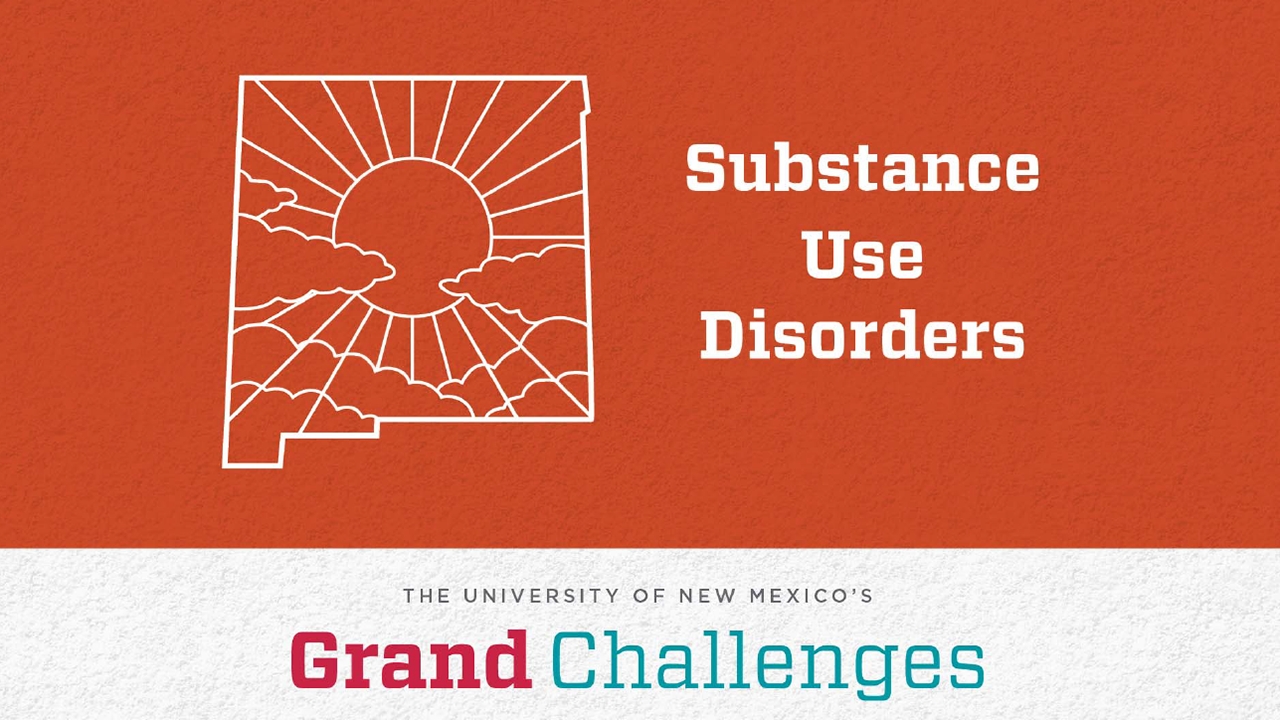 University of New Mexico professor of Psychology Katie Witkiewitz is spearheading a new program to provide mentorship for graduate students who are working to address issues of health inequities in New Mexico.

The work is being done through the Substance Use Disorders (SUD) Grand Challenge Graduate Student Scholars Program. 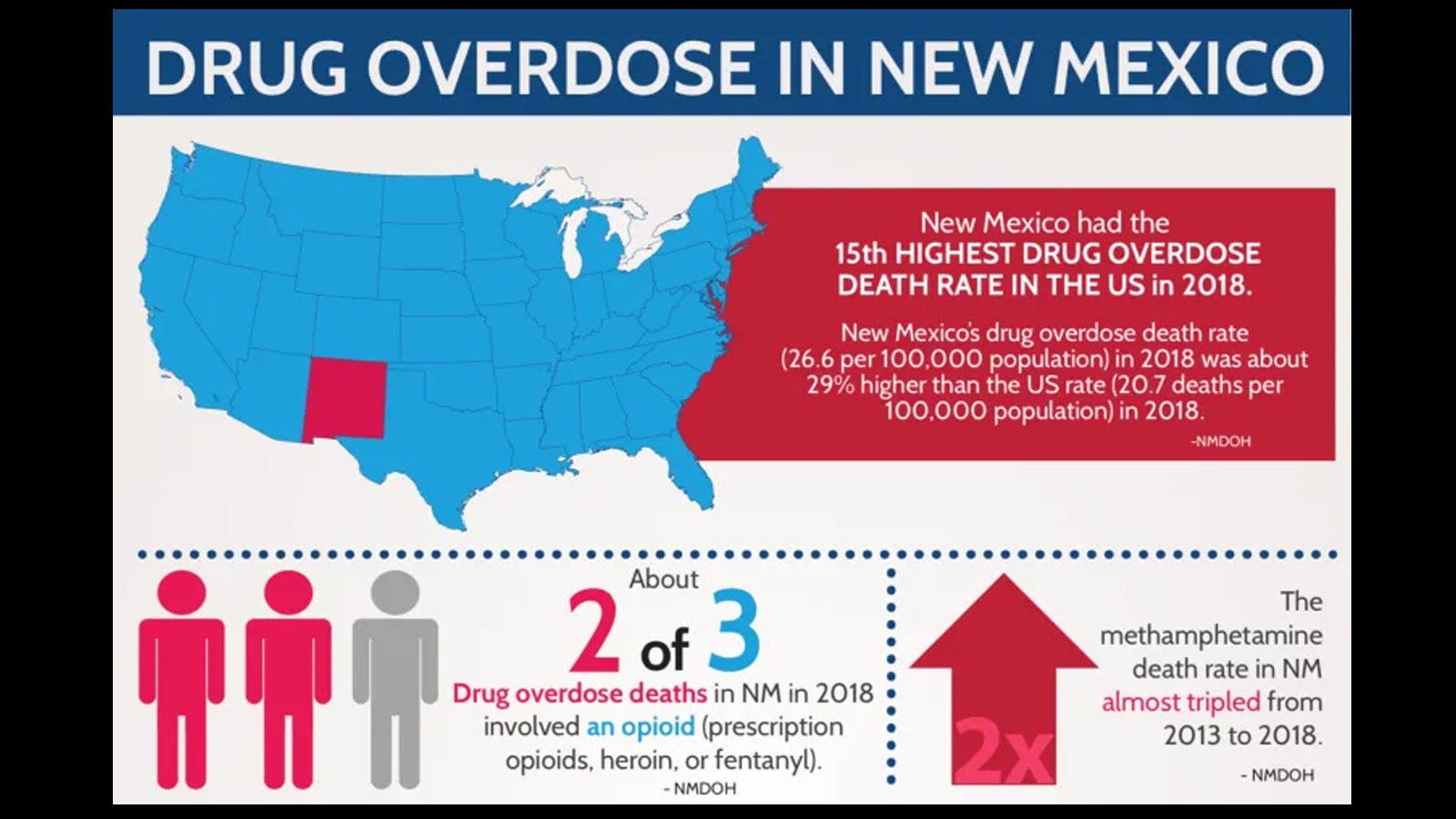 According to the New Mexico Department of Health, New Mexico had the 15th highest drug overdose death rate in the US in 2018. Photo from nmhealth.org.

“I hope to support students who are doing research that will have a lasting effect on reducing the impact of substance use and substance use disorders in New Mexico. Each of the students is doing highly creative and innovative work that will not only contribute to their own training as scientists, but that will likely have a lasting effect on people in the state of New Mexico,” Witkiewitz said.

Witkiewitz, who is also a researcher at the UNM Center on Alcohol, Substance Use and Addictions (CASAA) as well as part of the SUD Grand Challenge team, said five students in September 2020 were selected for the program, which lasts until Summer 2021. 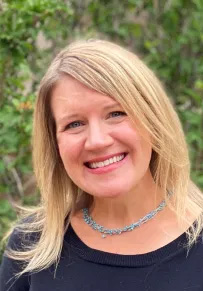 “We have $5,000 to support each student. The funds can support the direct costs of research, training, or for financial support to provide a stipend for the student to conduct the research,” she said.

The program is funded by the central campus Substance Use Disorders Grand Challenge, which allocated $25,000 to the program. 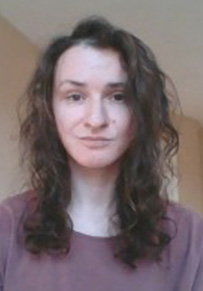 “I have been studying substance use disorder in the context of neurophysiology because the functioning of the brain and body are interdependent. This is particularly true regarding our emotions. When it comes to SUD, a very rich area of research is emotional states and how people cope with their emotions and stress, and whether that may be related to the development of a SUD,” Stevens said. “This is important for both the predisposition to develop a SUD and for relapse and continued use.”

More specifically, Stevens said she’s focusing on what sort of patterns arise in heartbeats that may predict relapse or possibly indicate a predisposition for SUD. She is also modulating the heart rate through various interventions that may improve SUD treatments.

“So far I’ve found certain heart rate patterns that are associated with increased stress levels, and in turn those increased stress levels are associated with higher severity of substance use. Given how accessible measuring heart rate is, it is an extremely useful index that gives us a window into the emotional states that drive so many of our behaviors, as well as a potential target for intervention,” Stevens said, adding that the mentorship provided by the SUD Student Scholars Program is invaluable, and she most likely plans to put the funding toward educational and training resources and computer software.

“It means a great deal to me to receive an award with emphasis on diversity research. LGBTQ+ individuals are at higher risk for SUD, and given my diverse background, I’m especially passionate about opportunities to diversify my research,” Stevens said. 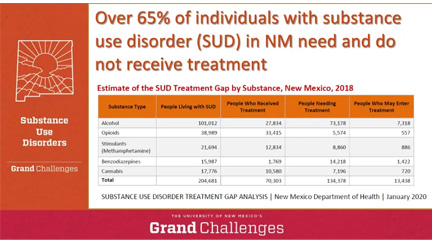 According to a 2020 NMDOH gap analysis, over 65% of individuals with substance use disorder in New Mexico need and do not receive the treatment they need.

Another project to be funded by the SUD Student Scholars Program includes research focusing on the intersection between addiction and health disparities among Hispanic/Latinx populations led by graduate student Alexandra Hernandez-Vallant.

“As the daughter of immigrants, I grew up navigating multiple cultures, which has made me a keen observer of important commonalities and differences across cultures. This inspired my research interests to examine the impact of cultural factors on addiction treatment and outcomes as well as the interplay between individual, community, and social-structural levels of analysis that inform prevention, treatment, and policy,” Hernandez-Vallant said. 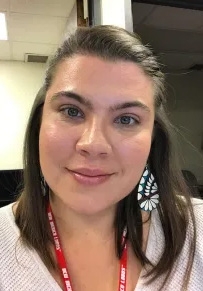 Along with her mentor, assistant professor of Psychology Kamilla Venner, and other colleagues, Hernandez-Vallant said she is currently working on a review of literature about culturally adapted empirically supported treatments (ESTs) for Latinx populations with a focus on alcohol and substance use treatments through the program.

“We are examining the models used to culturally tailor ESTs, the types of cultural adaptations made, and effect sizes and moderators for any randomized control trials (RCTs).  Culturally tailoring evidenced-based treatments for substance use disorders for Latinx people has provided substantive evidence of the unique influence of cultural variables at different points of treatment follow up. For example, perceived social determinants of health have been shown to moderate the efficacy of ESTs that have and have not undergone adaptation for Latinx people,” Hernandez-Vallant said.

To better understand the complexities of these factors, Hernandez-Vallant said her plan is to collect data in 2021 in a university and community sample of Latinx/Hispanic participants in New Mexico. 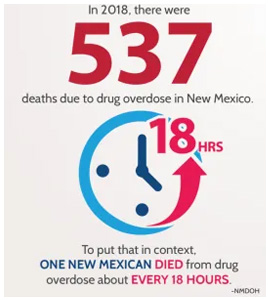 According to NMDOH, there were 537 deaths due to drug overdose in New Mexico in 2018.

Hernandez-Vallant said the Latinx population is predicted to grow exponentially in the coming decades and more work is needed to understand the unique factors that contribute to substance misuse in a population that is likely influenced by individual, sociocultural, and systemic factors.

“ESTs have been designed, developed, and evaluated in non-Hispanic White samples and are primarily conducted by researchers from this same background,” Hernandez-Vallant said. “This brings into question the generalizability of interventions to historically marginalized groups who have been largely left out of research. Further still, Latinx people are less likely to access mental health and/or substance use treatment as compared to other racial/ethnic groups suggesting research aimed at improving the acceptability and accessibility of interventions for this population is sorely needed. This is likely even more salient here in New Mexico, a diverse state with a rich and unique history.” 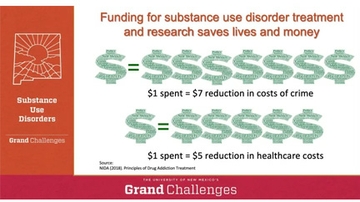 Research from the National Institute on Drug Abuse shows funding for substance use disorder treatment and research saves lives and money.

Being chosen for the SUD Scholars Program has cleared a path for her both personally and professionally, Hernandez-Vallant said.

“This achievement is incredibly meaningful to me. I came to graduate school with a passion to work in the addiction field, but I did not have any direct research experience in it yet. Being chosen as a scholar has in many ways validated my doubts about whether I can be successful in this field. Through the program I will be able to fund time to do research as well as supplement my existing training with additional quantitative training specifically,” Hernandez-Vallant said.