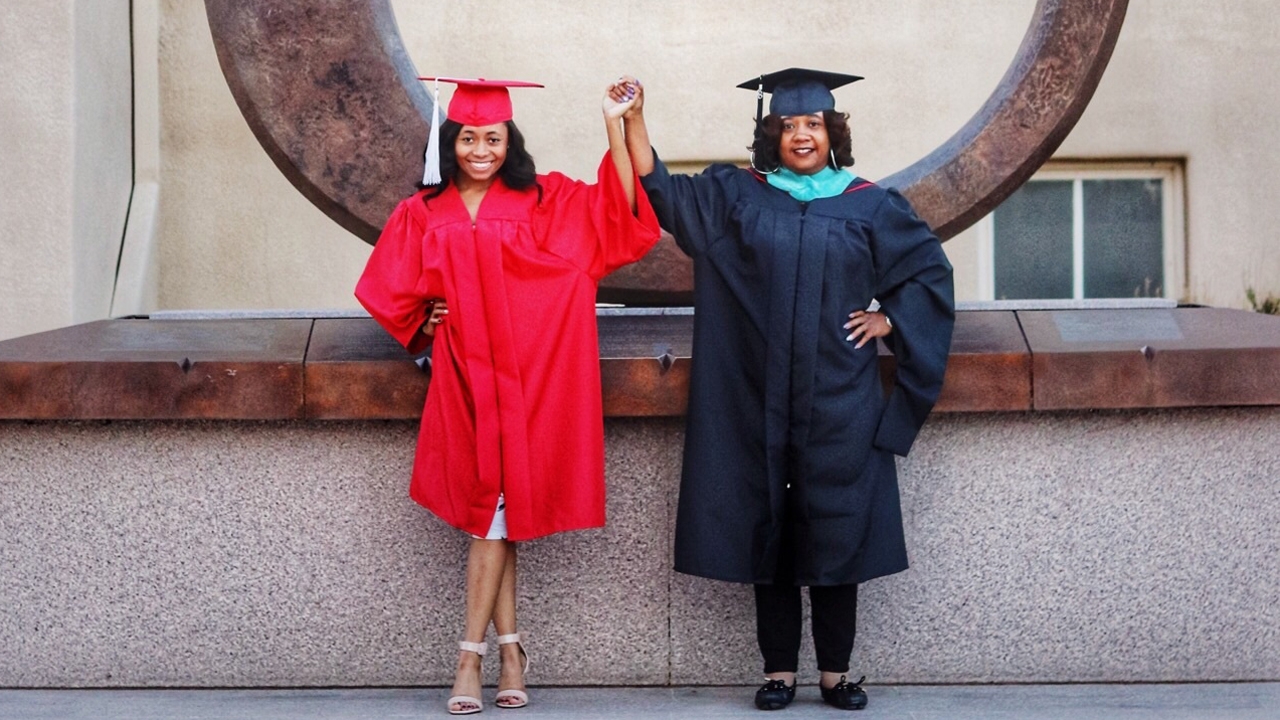 Lori started out attending school part-time, with two classes per semester. Her job at the time was quite demanding. In Jan. 2018, she accelerated her course load thanks to a more manageable workload at the office and a supportive, understanding boss.

Meanwhile, Alea was working part-time and going to school full-time. When she asked the question, “What would it take for me to double major?” She also took classes during the summer semester. Since both of her fields of study fall under the College of Arts and Sciences, Alea was able to overlap certain courses.

When they started assessing their respective graduation trajectories, it occurred to Alea and Lori that they were on track to graduate at the same time.

All of this was happening while the two women were navigating a sudden and frightening health scare for Lori.

In December of 2017, Lori had routine ankle surgery. She went back to work at the start of the new year, but around mid-January found herself not feeling very well.

When Alea came home that evening, she could tell something was wrong. Lori tried to brush it off, saying she’d be fine after a good night’s sleep, but Alea insisted they go to the emergency room. Her daughter’s urging was a life-saving move for Lori.

“Lo and behold, we get to the emergency room,” Lori says, “and they discovered that after my ankle surgery, blood had pulled in my foot and traveled up my leg, and I had not one but two blood clots, one in each lung.”

This was the week before UNM’s spring semester started. When Lori was asked by caretakers at the hospital if she had any questions about her diagnosis or treatment plan, she only had one.

She was determined to stay on track and felt compelled to keep herself going. Lori knew that if she took a semester off, she would lose her motivation and start to wallow in all the difficult things that were happening.

“Alea kept me really grounded,” Lori says, “in terms of… ‘You’re not superwoman, you don’t have to be superwoman. You need to take care of yourself, because I need you here.’”

Her doctor told her she needed complete bed rest for 7-10 days, but if she could attend classes online, then she was cleared to go back to work and ease into other daily activities.

“I have really awesome professors who worked with me and made sure I could sign in online,” Lori says. “So, I went through the spring semester… going to school full-time, going to work full-time, and going through physical therapy for my ankle twice a week.”

In order to keep their household running smoothly, Alea stepped up to get things done.

“It was rough,” Alea says. “I’ve always given my mom props because she was a single parent, and she never let activities that I wanted to do go unfulfilled because it was just her. So, having to step up and do laundry and plan meals and go to the grocery store and ‘what do you need from Target?’ I’m like… this is hard!”

As Lori tells it, their roles haven’t completely reversed, but they do overlap more.

“She’s always asking me, ‘Did you take your medicine today?’ and she’ll tell me I don’t look very good and I need to go lie down,” Lori says.

“She brought the mom out in me,” Alea admits.

“Alea kept me really grounded,” Lori says, “in terms of… ‘You’re not superwoman, you don’t have to be superwoman. You need to take care of yourself, because I need you here.’”

It was also crucial for Lori that Alea’s path not be disrupted by their change in circumstances. She didn’t want her daughter to suspend any of her momentum to take care of a recovering parent, especially when Alea considered dropping some classes to help more around the house.

“I told her to keep going at the pace she was going, and we’d be fine,” Lori says. “And we were. As a parent, this is when you know you’ve done right. When you see (your child) accept that load of responsibility.”

Lori and Alea come from a family of educators, so completing college degrees was always considered an inevitability, not a choice.

“As a minority woman in today’s society, you have to be a few steps ahead,” Lori says. “We don’t use it as an excuse. We say to ourselves, ‘These are the circumstances, how do we overcome them?’ One of the main goals I had for myself as a single parent was to beat every statistic put out about single parents – that we can’t raise children who are productive, which I think is an absolute lie, and that we can’t do things that other people can do. It looks different for us, but we absolutely can get it done.”

As for what’s next, both of the Whites are still figuring that out. Alea originally felt she would go into journalism to write news stories, but the lifestyle of long, hard hours, hunting down leads and interviewing strangers doesn’t currently resonate with her.

“It did push me to be a bit more outgoing, I will say that. I have started a blog… well, I haven’t posted anything yet,” Alea says, “but that’s my goal for after graduation. I’d like to write about what this year has been like… and I like to travel, so I hope to do more of that now that I won’t be in school.”

With a 20-plus-year career at Presbyterian, Lori is in no rush to move on from the position she’s in now. She likes her work, her boss, and the salary she earns. Her immediate focus after graduation is allowing herself to decompress from her educational journey.

One thing the mother-daughter duo knows for sure is that they’re ready for a break. For now, that break will look like “taking a breath and sitting still for a minute,” as Lori put it, with an eye toward a tropical vacation next year. After the year they’ve had, both Alea and Lori know they deserve it.

When she left the hospital, Lori was on blood thinners for the better part of the year. She only just started to feel more like herself again in September, just in time for her last semester of graduate school. She still struggles a bit with walking, thanks to a surgery that wasn’t as effective as she’d hoped.

“But what I try to focus on is that I’m still here. Because I could easily not be here, and not be having this experience,” Lori says. “So, I’m blessed that – despite everything Alea and I have been through – we’ve survived all of it, mentally, physically... and we’re here to share our story.”