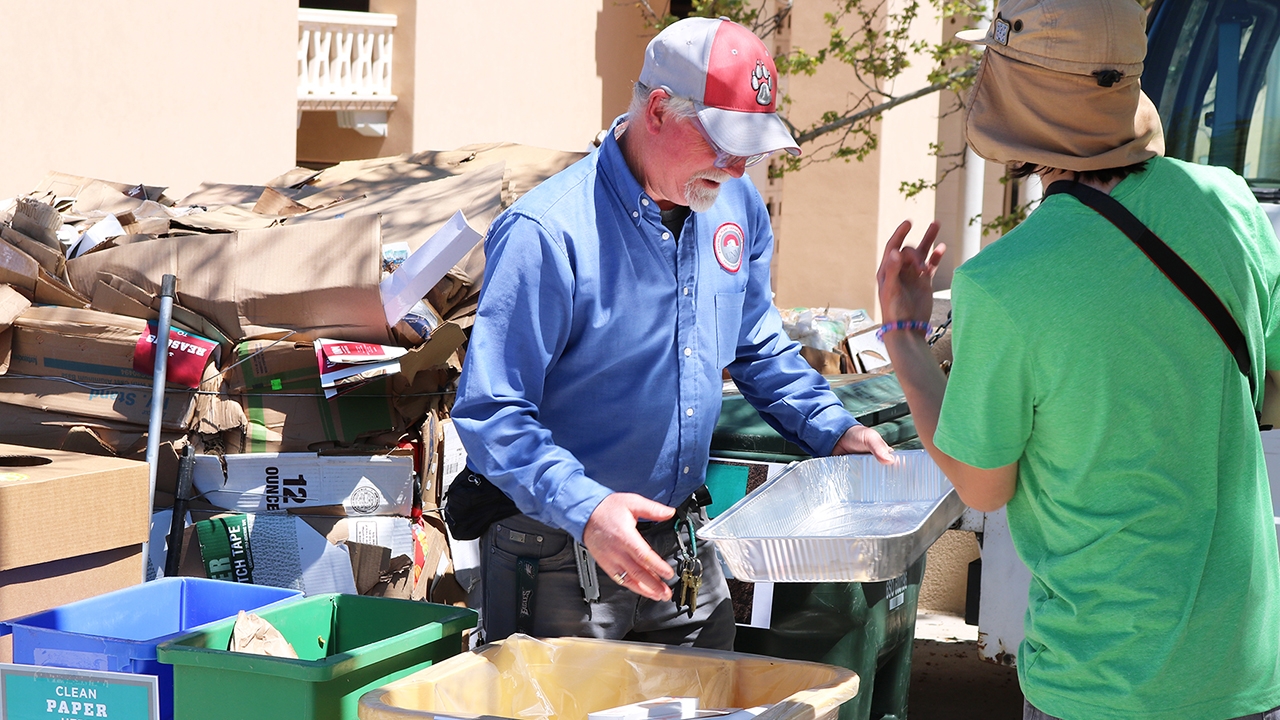 UNM Recycling marks its 30-year anniversary at The University of New Mexico with recognition of its origins and a positive outlook for the future. While the official entity has a long history, the act of recycling at UNM has been championed on a more informal basis for much longer.

UNM Records Management, along with volunteers who cared about the environment, had been recycling paper at various locations on campus since 1976. Their work led to a more formalized effort in 1991 that ensured the availability of recycling services across the Albuquerque campus.

On Feb. 26, 1991, UNM Recycling officially began with a $38,000 grant from the New Mexico Energy, Minerals and Natural Resources Department. The funds were used to purchase recycling collection containers. UNM also budgeted $64,000 to cover annual operating costs. The new program was led by the late Jim Davis, one of the early recycling advocates at UNM and for whom the Jim Davis Staff Council Award for Meritorious Service was named. Davis remained with UNM Recycling until 1997.

In 2003, UNM Recycling was placed under the umbrella of Safety and Risk Services (now known as Environmental Health and Safety), and in 2013, it became part of Facilities Management where it currently operates within the Environmental Services division. The unit currently has a staff of seven recycling technicians plus a manager, and serves over 125 buildings on the UNM campus.

The stated goals of the program, according to University Administrative Policy 6350, “are to minimize adverse impacts on the environment by diverting usable materials from landfills and to enhance University sustainability efforts.” However, the current recycling manager, John “Ski” Shaski, sees the service unit as much more than a collector of materials.

“We seek partnerships with UNM academic programs and student groups to teach and engage students, faculty, and staff on how the entirety of the campus community must come together achieve the environmental benefits of recycling,” said Shaski.

The recycling industry faces enormous challenges, both economic and cultural, with shrinking markets for recycled materials and the growth of community wish-cycling. Wish-cycling is the practice of putting something in the recycling bin in hopes it will be recycled when in fact doing so contaminates the recycling stream with non-recyclable materials.

“We’re seeing a lack of education at all points in the waste stream, particularly at the source of collection,” said Shaski. “This limited understanding of what can and cannot be recycled leads to wish-cycling. While we appreciate the good intentions of people who feel they are keeping waste out of the landfill, when they contaminate the bins with non-recyclables, it often leads to the entire batch being sent to the landfill undermining everyone’s efforts and creating even more trash.”

Inadequate source separation is one of the biggest threats to effective recycling, but Shaski hopes UNM Recycling can become a leader in the state in combating this threat.

"Being a recycling leader in the state, not just among the universities, is something I see as our charge from UNM, particularly in the area of improving source separation. We want to bring new ideas, take greater risks, and bring more care to the process of recycling. As an educational institution, we have a unique opportunity to explore innovative solutions to meet these challenges and help prepare our students to be stewards of the environment when they leave UNM."