UNM Newsroom / News / A passion to defeat the whitefly

A passion to defeat the whitefly

University of New Mexico alumna Laura Boykin (Ph.D. 2003) was recently featured in the article, “12 Badass Scientists...Who Also Happen to be Women" released by Ted Fellows, a program that falls under the purview of TED (Technology, Entertainment, Design) the organization whose motto is to make great ideas accessible and spark conversation.

TED Fellows are individuals lauded for their innovative solutions to the world's most complex challenges today. For Boykin, the challenge came in the form of the whitefly, an insect that transmits a virus to cassava, a root vegetable that nearly 800 million people worldwide rely on for sustenance, some for income.

Plight of the smallholder farmer
In 2012, Boykin attended an Agricultural Research Connections workshop hosted by the Bill and Melinda Gates Foundation in Kenya. During that trip, she visited a smallholder farm in East Africa and saw the devastation caused by whiteflies.

“At that moment, I was sold that this is what I needed to be doing,” she said. “The situation was unacceptable, and my skills could be applied to the problem. I hadn’t considered before that I could pass them on to the next generation of scientists. I decided the best use of my time on Earth was to make a difference here.”

A computational biologist, Boykin uses genomics, supercomputing and phylogenetics to identify whitefly species, gathering information necessary for researchers to modify cassava to resist both insect and virus. To accelerate progress, she launched WhiteFlyBase — the world’s first database of whitefly genetic information — with the hope of eradicating whitefly and bringing food security to East Africa.

“I became interested in Sub-Saharan Africa because, scientifically, it sits at the base of that evolutionary tree. The fact that they’ve been around for millions of years fascinated me." — Laura Boykin

“I became interested in Sub-Saharan Africa because, scientifically, it sits at the base of that evolutionary tree,” Boykin said. “The fact that they’ve been around for millions of years fascinated me.”

For personal stories about the profound challenges Africa smallholder farmers face, Boykin recommends, “The Last Hunger Season: A Year in an African Farm Community on the Brink of Change” by Roger Thurow. “It outlines the day in the life of the strongest people on the planet, the women smallholder farmers,” she said. 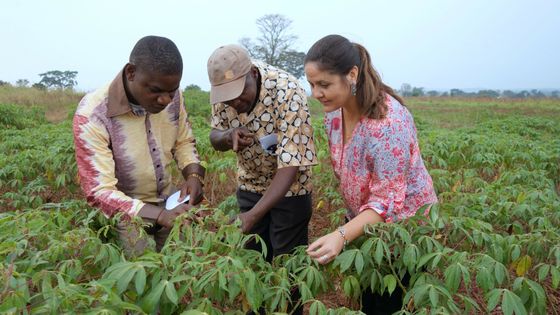 While the whitefly has not yet fully been eradicated it is now highly regulated around the world. Countries have massive regulations on whitefly moving across borders. It can transmit viruses to tomatoes, sweet potatoes and ornamental plants. They are dreaded worldwide.

The connection to New Mexico
Boykin has a long history in New Mexico. Her mother and father met in Villanueva while student teaching. “I’m sure that hearing the stories of them growing up, the beautiful scenery, the warm people and amazing food, all influenced my decision to attend UNM,” she said.

Boykin started her Ph.D. in 1998 with biology professor Timothy Lowrey. “I chose UNM because I wanted to learn more about molecular evolution and systematics and many in the department were on the cutting edge of these fields,” she said.

“Laura excelled in her Ph.D. research at UNM and was never afraid to tackle difficult problems with innovative methods,” Lowrey said. “She was particularly adept at forming interdisciplinary research relationships to achieve results that were published in high quality, peer-reviewed scientific journals. I am extremely happy that she is applying her communication and research talents to the control of Cassava whitefly in Africa, which will impact and improve life for millions of people on the continent where I began my academic career.”

During her time at UNM, Boykin worked at Los Alamos National Laboratory, in the Theoretical Biology and Biophysics Group studying the evolution of influenza and Hepatitis C, where she got her first exposure to supercomputing. “At the time, many thought I was crazy to have two major research projects going,” she said, “but looking back, it was one of the best decisions of my life. The skills from both my plant systematics and viral evolution knowledge set me up to be exactly where I am today---studying the speciation of whiteflies that transmit deadly viruses.”

Boykin said that she loved her time at UNM. “It was hard work but it has paid off,” she said. “I must admit, I miss the Frontier and El Patio, as there is no comparable Mexican food in Perth, Western Australia where I currently live. I look forward to visiting again in the near future.”