Dorothy Baca, renowned costume designer and professor of Theater Costume Design at the University of New Mexico, spent five weeks this fall teaching and lecturing at the University of Wales, Trinity Saint David (UWTSD) in Carmarthen, Wales where, according to legend, the great Arthurian sorcerer Merlin was born.

UNM has a productive and successful student exchange program with UWTSD, but Baca is the first professor from New Mexico to take a position teaching Welsh students in Carmarthen. She taught a four day make-up design class to second year students, with no previous experience, and was impressed with their talents. She also lectured in numerous design/technology classes, and mentored a third year costume design student touring with the theater production of Medea.

“All the classes I lectured in were very positive,” Baca said. “The first year students are so energetic and they have already established an interesting dynamic between them,” she said. “The last year students are talented and eager. It was a pleasure to see how quickly they learned, and the high level of creativity they possess.”

Theatre students from UWTSD spent a semester at UNM studying in the Department of Theatre and Dance and, correspondingly, three UNM students in the program studied at UWTSD. As UNM’s outreach to other institutions worldwide grows, faculty involvement matters more and more. 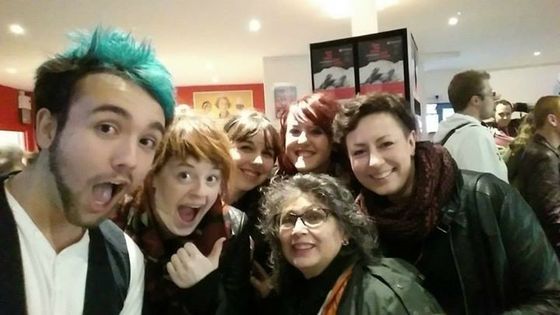 Visiting campuses in other countries can be quite rewarding. Baca said she enjoyed her time in Carmarthen and at UWTSD, calling the experience amazing. “The university and the town were very welcoming and supportive. And I feel like I got to know and understand the Welsh culture,” Baca said.

With the ongoing relationship between UNM and UWTSD, and the value of the project in terms of experiences and ideas, it is hoped that even more students and staff will have the opportunity to benefit in the future.

Baca has professional television and film credits that include Dr. Quinn, Medicine Woman, Major Dad, Charles in Charge, Murder, She Wrote, Batman and Robin, The Longest Yard, and What Women Want. Baca was the costume supervisor on Suspect Zero and Border Town, both filmed in New Mexico.

UWTSD was established in 2010 through the merger of the University of Wales Lampeter and Trinity University College, Carmarthen. In 2013, the Swansea Metropolitan University merged with the university as well. The university’s Royal Charter 1828 is the oldest in Wales, and it is third behind Oxford and Cambridge in Wales and England. HRH Prince of Wales is the patron of the university.

Visit UWTSD for a slideshow of more student photos.