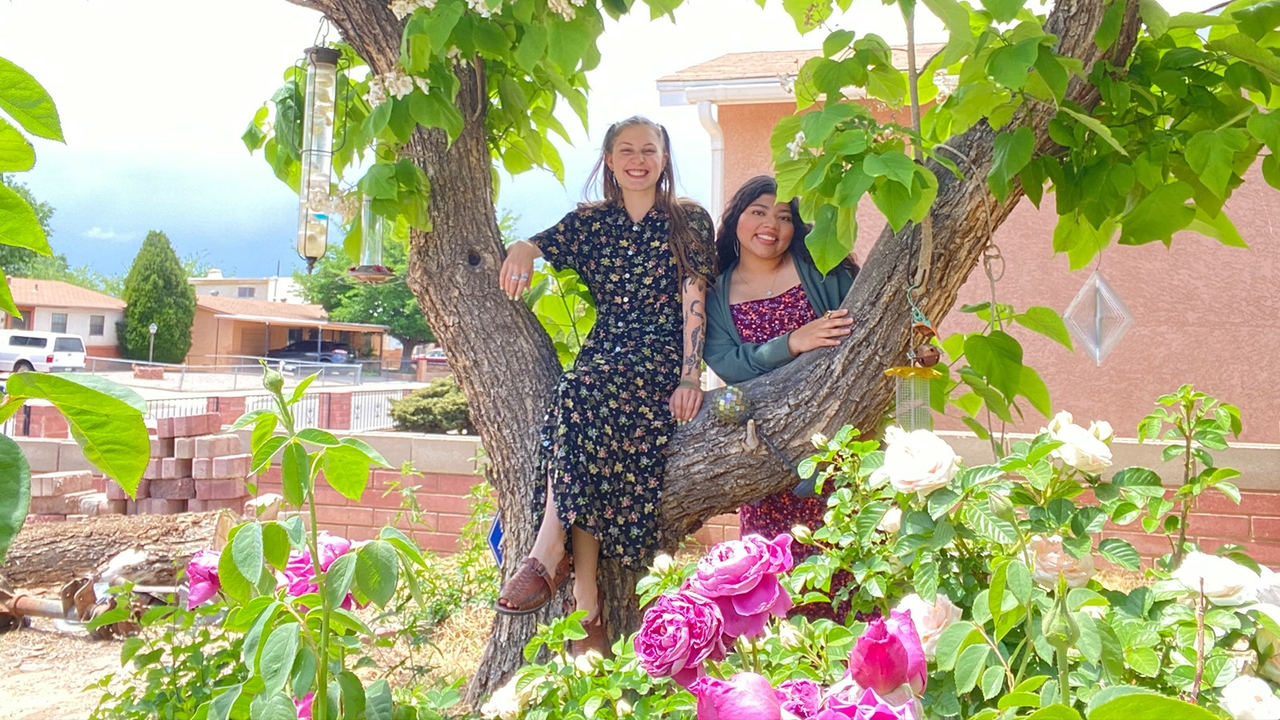 Two students from The University of New Mexico College of Fine Arts recently released a music video featuring a song they co-wrote and perform. What started as a joke between them about becoming a band became a reality and both hope the new song and video is the beginning of a lifelong career in music.

Liz Alarid-West and Aileen Gonzalez became friends in the Albuquerque charter school Tierra Adentro (TANM), where they met their mentor Caro Acuña, a professional and percussionist who co-produced the video. The song, Honey, is a gentle love song, with Alarid-West on bass and Gonzalez on guitar. The bossa nova groove is driven by the beat of cajón and congas played by Acuña.

“To me, it seemed catchy and beautiful to use as a stage name and a band name,” she explained.

“We would even joke around about starting a band because we saw how well we played together,” Gonzalez said.

“Our relationship with Caro is very natural and organic because we are a musical family and she is our tía (auntie),” Alarid-West noted.

Alarid-West, a dancer and choreographer, began her musical journey playing trumpet in an elementary school mariachi club. She went on to learn – “and am still learning” percussion, bass, and guitar. She is starting her senior year in the fall with a double major in Dance and Spanish and expects to graduate with a bachelor of Fine Arts degree with a concentration in Flamenco. In the band, she goes by the moniker Mrowneila.

“UNM has helped my music through my guitar accompaniment of flamenco dance classes. Every semester that I play for dance, I see improvement in my technique and sound,” she said.

Gonzalez, a singer who also plays guitar and piano, just finished her freshman year at UNM and is experimenting with different courses in the College of Fine Arts before choosing a major and minor. Her love of music came from listening to her father sing and play when she was a child. She took Flamenco guitar, singing, and dance at TANM and started creating her own songs.

Both bring original songs to the band, blending sounds and genre.

“For Honey, I had the melody and guitar chords already, Liz came in on the bass. It is most definitely a group effort… We like to blend sounds and genres and play whatever makes us feel good. We really want to show how diverse we can be in our music,” Gonzalez remarked.

“What we learned since forming NICTEHA is that the musical process is important because it’s about listening to each other, inspiring each other, encouraging each other, communicating, care for one another and the music,” Acuña said.

The video is a first effort in producing and editing for Alarid-West and Gonzalez and neither have taken classes in production.

“It’s just trial and error for me. I’m still learning and teaching myself through videos, but the only way to really learn is to just do it… It’s really fun producing your own music. You can make it sound however you want and I can’t wait to hear how NICTEHA will sound in the future from teaching ourselves,” Gonzalez said.

The band members look forward to continuing their playing and songwriting, creating more videos, and now, as the pandemic restrictions life, playing live.

“We want our audience to feel the energy while we’re playing, to feel the liveness of the music,” Gonzalez commented. “We want to perform everywhere, around the world, doing music whether it be on a huge scale or local scale. “

“I am excited to see what NICTEHA will come up with 5 years from now,” Alarid-West remarked.

“Our future plan after graduation is to do music,” Gonzalez added. “We can’t see ourselves doing anything else. We want to produce and create more music. We can’t wait to finish our first album, self-produced. We really want to perform on NPR Tiny Desk Concert.”