The 4th of November was filled with bitter winds, good food, laughter, and the release of the second issue of Chamisa: A Journal of Literary, Performance, and Visual Arts of the Greater Southwest.

Hosted by the chief co-editors including Associate Professors Irene Vasquez and Leila Flores-Dueñas, and Professor Ray Hernández-Durán, the event showcased the various people and stories that made up the fabric of this issue’s theme of Women in the Southwest. 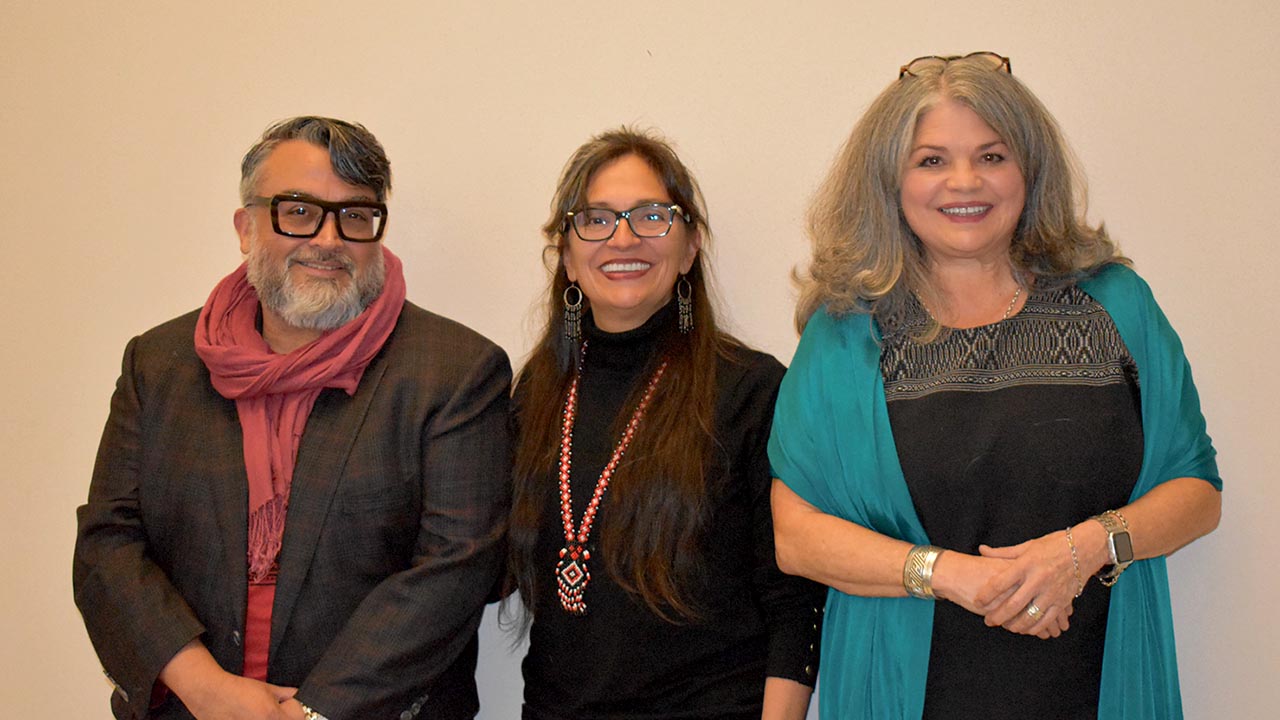 Published by the Southwest Hispanic Research Institute, the annual peer-reviewed journal serves as a multidisciplinary collection of art in all of its forms. Chamisa’s diversity in cultural and intellectual exchange is amplified by its focus throughout the Southwest, including New Mexico, Arizona, Texas, Utah, Nevada, Colorado, and California.

The celebration took place at UNM’s Maxwell Museum of Anthropology, and as all great events begin, good company and food were in abundant supply. Members of the Chamisa editorial board, community members, UNM staff, and students gathered together, demonstrating the community-engaged aspect of the journal. Eventually, the crowd filtered into the auditorium, where Vásquez offered opening remarks and a land acknowledgment followed. Vásquez emphasized that this is the first time SHRI has produced an academic community-engaged journal. Chamisa complements SHRI’s book series titled Contextos. Next, Greg Trejo, associate director of finance and administration for the Office of the Vice President for Research gave welcoming remarks, highlighting how Chamisa ties together the University’s status as a Hispanic Serving Institution and a Carnegie-designated Research One institution.

Flores-Dueñas and Hernández-Durán then both gave insight into the issue and its theme as well as how the editorial team selected the cover image. After that, a number of artists and researchers presented their works, including Eliseo “Cheo” Torres, the former vice president of Student Affairs, and Gabino Noriega, a teaching assistant from Chicana & Chicano Studies.

“Chamisa was never meant to be an academic journal alone,” said  Hernández-Durán. “Operating from a decolonial and social justice perspective we believe in tearing down hierarchies and divisions and being more equitable.”

Those having a hand in Chamisa stretch across the University and its many Colleges. Even the three chief co-editors hail from three separate colleges: Vásquez (College of Arts & Sciences), Flores-Dueñas (College of Education & Human Sciences), and Hernández-Durán (College of Fine Arts). Others who helped execute this issue included alumni of the College of Arts & Sciences, like Literary Arts Editor Patricia Perea who received her Ph.D. in American Studies, and current students, like Graphic Designer, Gustavo García, who is a part of the inaugural group of students pursuing a Ph.D. in Chicana/o Studies.

“Chamisa is produced by faculty from different disciplines and units at UNM who are not just Hispanic themselves but who are members of the Southwest Hispanic Research Institute (SHRI), a body intended to, both, provide a space for UNM faculty, mostly Hispanic faculty, to come together and provide the opportunity for dialogue and collaboration, and to feature the work done at UNM,” said Hernández-Durán.

Chamisa received over 40 downloads within the first two hours and is currently open to be downloaded. Physical copies will be available soon.