Coercion is not consent

When it comes to sexual contact, communication is key to making sure that both partners are comfortable with what is going on and that no one feels pressured. Consent needs to be addressed at every stage of the encounter. Verbal and physical cues and ways to express that one partner or the other wants to slow down or stop are important.

The University of New Mexico, like other campuses around the country, takes seriously its responsibility to educate and inform the campus community about healthy sexual relationships.

UNM Director of the Women’s Resource Center Summer Little gives training sessions to athletes, member of the Greek system and other students about how to engage in appropriate, consensual relationships. “We address things like ‘enthusiastic consent,’ which is affirmative, voluntary and sober,” she said, adding that if someone is too drunk to drive, he or she is too drunk to consent to sex. “That is our guideline – it is the point at which they are no longer able to consent legally,” She added that 90 percent of all campus rapes occur when the assailant or the victim has used alcohol.

WRC shows a video by sex education activist Laci Green during training. Green focuses on communication – making a mutual decision about how far sexual partners want to go and being able to clearly express their comfort with the situation.

“Both partners need to feel comfortable and safe to stop at any time. Anytime someone doesn’t feel safe asking to stop, then coercion or pressure could be happening. If sex is unwanted, it is assault. Giving in or submitting is not the same as giving consent,” Little said. Someone who is pressured or forced into sex can also suffer emotional harm. 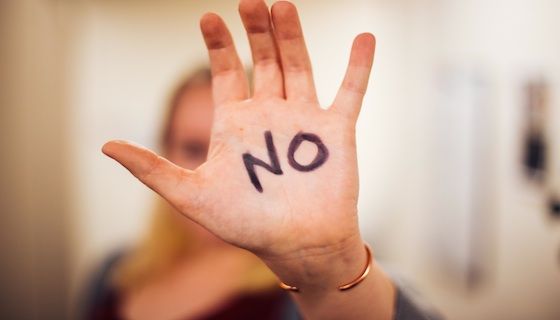 Someone’s facial expression or body language can provide cues about not being comfortable about sex. Someone who is being pressured may not respond to the physical advances, or touch; they may push the aggressor away or stiffen their muscles. Anytime someone responds less than enthusiastically, then the advances need to stop and the partners need to communicate – without coercion.

To slow things down, individuals can say that they don’t want to go any further than hugging, touching or kissing. They can also ask for things to slow down.

And no means no. One technique that works well if someone feels unsafe or uncomfortable with how quickly things are moving is to say, “I am going to throw up!” That generally will get an aggressor to move away. Telling someone to stop or telling the him or her that you need to use the restroom also help.

On the rise among college campuses is a switch from “no means no” to a clear signal of consent: “yes means yes.” In California, institutions are charged to determine whether both parties gave “affirmative, conscious and voluntary agreement” in investigations of alleged sexual assault. Silence or passivity no longer qualifies as “consent.” Young men on college campuses are encouraged to sign on to “It’s On Us,” a campaign against sexual assault on college campuses that signifies that victims do not stand alone and that the entire community needs to fight sexual assault.

With a goal of a safer campus, it makes sense for institutions to help students learn about prevention than it is to have to investigate disputes over consent after the fact. Federal law mandates that universities investigate and respond to sexual assault allegations – and federal money is tied to it.