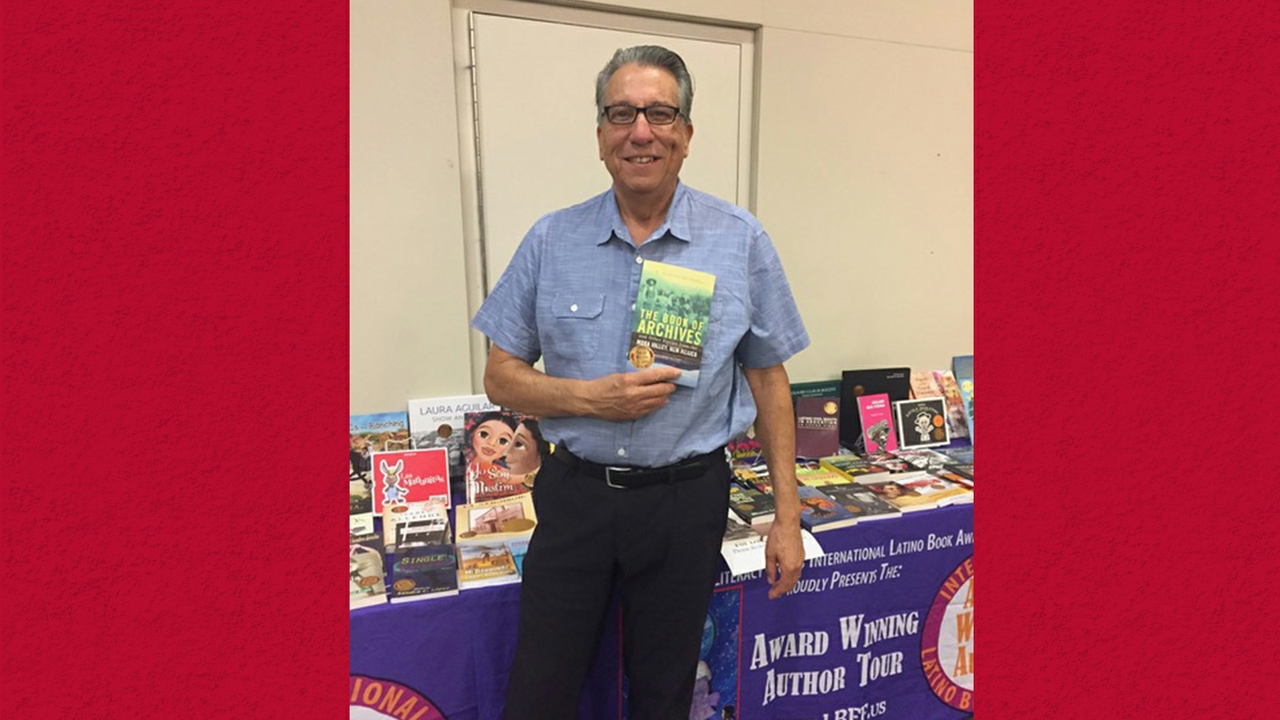 Professor A. Gabriel Meléndez, director of the Center for Regional Studies since 2017, recently announced his retirement at the end of July after more than 26 years as a faculty member at The University of New Mexico.

During his career, Meléndez accrued a long list of accomplishments and honors, including being designated as a Distinguished Professor, the highest title that UNM bestows upon its faculty. It is awarded to those individuals who have demonstrated outstanding achievements, and are nationally and internationally renowned as scholars. Only two other Latino professors have achieved the honor at UNM. 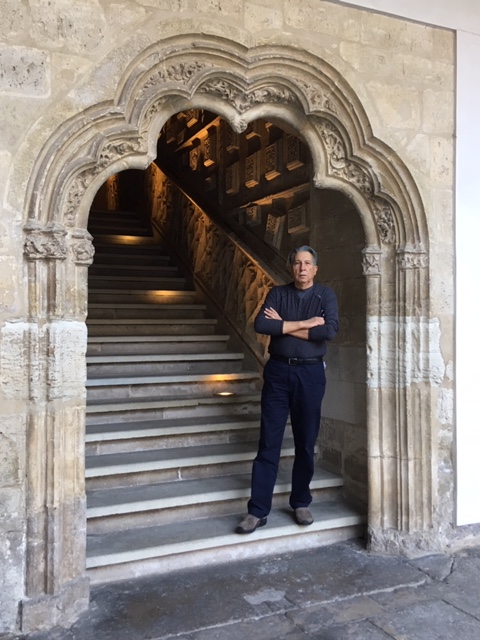 Professor Gabriel Meléndez at the University of Salamanca, Spain

Meléndez was born in Mora, a tiny village in northern New Mexico. To describe Mora, he pointed to a 2017 interview with Pasatiempo reporter Molly Boyle, about his book, The Book of Archives and Other Stories from the Mora Valley, New Mexico.

“We have a particular concept that’s called querencia, like a deep attachment to the land. It expresses love to the place, and I think there’s also notions of the sacred floating through all of that. So it’s used a lot — tener su querencia — and that’s where the heart resides. So people who have moved away — they’ll still come back for family reunions, you know, that feeling comes alive. And then the valley is just so beautiful that it’s easy to say, ‘This is God’s country.’”

Little by little his family moved away from Mora.

“First my older siblings came to Albuquerque to find jobs and leave the small town. My mother mostly wanted to be near to them and my parents followed here, but also moved because it was difficult for my father to make a living running a sawmill and in lumbering. We moved and ended up living near Wells Park in Albuquerque. I grew up around people like the famous boxing champion Johnny Tapia, but also with neighbors like Roberto Mondragón, who became lieutenant governor of the state.”

He entered his teen years in a turbulent period.

“I graduated from Albuquerque High as the nation was in the middle of the Vietnam War, the Civil Rights and peace movements and the Chicano Civil Rights movement. The Tijerina Land Grant cause, important to New Mexico history, was a big part of all this action. All these elements were converging and creating energy, convulsions, transitions and dramatic change.”

A group from UNM’s College Enrichment Program came to do outreach to minority, under-represented and first-generation college students and Meléndez fit all three designations. He remembered Gilbert Montoya, a college enrichment recruiter born in Wagon Mound, N.M., near Mora, was among them.

“He was clearly able to relate to the experience I had lived growing up in a predominately Nuevomexicano area of town. He guided us step-by-step through the basics of how to apply to colleges and universities. He impressed upon us the importance of a higher education and outlined the pressing need for young people from my background to believe in ourselves and convince ourselves that it was possible to go on to college. I chose UNM because I was really was close to my parents and they in turn didn’t exactly want me bounding off to some other city, a cultural and common dilemma for first-generation students and their families.”

Meléndez completed his Bachelor and Master of Arts degrees and Ph.D. at UNM in the Department of Modern and Classical Languages. From there he went as a visiting professor at the University of Utah in Salt Lake City, and then as an assistant professor at Mills College in Oakland, CA, a small liberal arts college for women, where he was on faculty in the Modern Languages Department and also directed the Ethnic Studies Program.

In 1990, after 10 years, Meléndez came back to UNM after being selected as a Research Fellow to participate in a Southwest Hispanic Research Institute Rockefeller Humanities Scholar Project.

The one-year research appointment permitted him to work on So All is Not Lost, a rigorous academic study of Spanish-language newspapers published in New Mexico and the Southwest. Dr. Nicolás Kanellos, founder and director of the Recovering the U.S. Hispanic Literary Heritage Project at the University of Houston noted, “Meléndez’s book is the most thorough and deeply interpretive study ever performed on any segment of Hispanic print culture in the United States.”

Meléndez decided to stay in New Mexico, where his research, teaching and mentoring of students had direct application to the populations of the state. He was selected to be the executive director of the Hispanic Cultural Foundation, the forerunner of today’s National Hispanic Cultural Center of New Mexico, and then for a faculty position in American Studies at UNM.

“Being in American Studies meant that I needed to think in decidedly interdisciplinary ways in terms of research and teaching. Fortunately my work on the newspapers had already pushed me into cross-disciplinary frames of analysis and so the leap was not too large to make. I began my position in American Studies in 1994, 26 years ago, and I have been a regular voting member of the faculty ever since then.”

Meléndez hopes his students took away from his classes, “the sense that real knowledge and certainty of findings comes from a careful and full examination of events, documents (I especially like them to use the archives in the Center for Southwest Research and Special Collections), and paying careful attention to the voices of people who have lived or experienced the events surrounding any given moment in time. I want them to avoid taking shortcuts so that in the end their conclusions and assertions have lasting power and outperform studies that bend to fads and reigning discourses.”

He added, “I am very proud to have been able to contribute in direct and meaningful ways to field of Southwest Studies and critical regionalism. First, as a faculty member in American Studies and then in my campus-wide post as director of the Center for Regional Studies, where my academic and administrative work has been in service to UNM faculty, graduate and undergraduate students. An important contribution is that I have been able to increase UNM’s reputation as a key destination for national and international scholars to engage in regional studies research.”

“I am inspired by the rich diversity of knowledge and experience that informs our region and its critical place in our nation. My biggest reward is to see graduate and undergraduate students advance in their programs, earn degrees and be competitive in the field of education and other professions.”

Meléndez looks forward in retirement to continuing work on the Pasó Por Aquí book series at UNM Press and work closely with co-editor Genaro Padilla in English at the University of California, Berkeley, to identify new authors and works for the series.

“I also hope to re-engage a novel I have in progress on Albuquerque and the Chicano movement as I saw it as a student during the era of Vietnam, the advent of counterculture, and the 1970s. When COVID restrictions lift I will travel to Sydney, Australia for an extended visit with my grandson and family there,” he said.

As an author and editor, Meléndez has published four scholarly books; co-authored five other scholarly books and has a sixth book under contract at an academic press; as series editor of UNM Press Pasó Por Aquí Series he has overseen the publication of some 12 books; and at the Center for Regional Studies he has directed the book subvention initiative, which has resulted in the publication of 10 new books since 2017; he has published 16 chapter-length scholarly, peer-reviewed articles; and 37 other works of scholarship.

Meléndez will be remembered by students and colleagues alike.

"Gabriel Meléndez has done so much for UNM, for our students, and for our faculty, and for the scholarship of the southwest, that I'm truly in awe," said Provost and Executive Vice President for Academic Affairs James Paul Holloway. "While his retirement is a loss for us, it's also a moment of anticipation: I can't wait to read his novel!"

In a letter congratulating him on his retirement, John Nieto-Phillips, vice provost of Diversity and Inclusion at Indiana University said, “My first reaction was, this can’t be. Your work at UNM is far from over. You’ve done such a phenomenal job leading and growing the Center for Regional Studies these past three years, not to mention the many years you chaired American Studies.”

Nieto-Phillips noted that Meléndez “had a way of connecting scholars to one another, and also making sure our voices were heard and part of key conversations.” He added that Meléndez had a similar impact on other colleagues and students, “You’ve helped to encourage and nourish a whole cohort of scholars who are reshaping conversations about New Mexico… You’ve offered us a model of generous and impactful leadership.”

He goes on to say, and many of Meléndez’s colleagues and students will agree, “After three decades giving so much of your career and service to UNM, you deserve un buen retiro! That said, I’m lamenting your departure and what it means for UNM. You’ve been a great friend, collaborator, scholar, and catalyst for so much important work. I know your influence will continue for years to come, but I didn’t want to miss the moment to say mil gracias on your last day at UNM… Todo esto te digo, porque te me quedaré siempre muy agradecido [I say all of this because I will be forever grateful to you.]”