Biography speaks of service to community, to business and industry and government
By Carolyn Gonzales June 23, 2014
Categories: Latest News Anderson School of Management

Hanging in Doug Brown’s office is a framed card giving him free access to all Major League Baseball parks in 1981. As a successful businessman, he had lots of connections. As dean of the Anderson School of Management, he brought those contacts to UNM to benefit the school, its programs and students. Now, after fulfilling the five years he agreed to provide, he is planning to retire at the end of June, although he intends to continue to do what he can to help UNM as a volunteer.

Brown’s biography speaks of his service – to community, to business and industry and to government. Among the many he has served is the State of New Mexico, when he served as Treasurer, a scandal-ridden agency when he took over. He came in, cleaned it up, all while managing its $5 billion short-term investment portfolio. He served as president and CEO of the Tuition Plan Consortium. He served as a Regent at the University of New Mexico and as Trustee at Stanford University. You see, he is a California boy, but New Mexico won him over. He was president and CEO of Talbot Financial Services. As co-founder, he grew Talbot from start up to a company recording more than $2 billion in annual sales nationally. He has served as a director of countless non-profits, and he and his wife Sarah were named New Mexico’s Outstanding Philanthropists by the Association of Fundraising Professionals.

Does UNM want to see him leave? Of course not, but he leaves a legacy that will carry Anderson School of Management forward.

“We have hit most of the metrics,” he said. “MBA enrollment is up 27 percent in five years and our BBA graduation rate is at 96 percent. We have tremendous employment connections and have raised the number of internships from 39 to 200. That is a direct student benefit.”

He rattles off the numbers in the programs – 1,100 BBA, 500 MBA, 100 masters in accounting, 100 Executive MBA, with 50 full-time academic faculty, 10 lecturers and 30 or so part-time professional faculty. “Having both academic and professional faculty creates the best of both worlds for Anderson and its students,” he said.

“Our students are committed. They have excellent work habits. Half of them have families and 80 percent work 20 hours or more per week, so they are serious students,” he said, adding that they start career preparedness “out of the gate,” by working on resumes, dress and etiquette for the business world. He notes that four of the last ten Clauve winners have come from Anderson.

“I have so enjoyed my interactions with students and am pleased that I was the first dean inducted into the student honor society, Delta Sigma Pi,” he said.

He is also pleased that Anderson has been successful in recruiting new faculty, despite “not being salary competitive.” Those who have been hired cover the gamut from the fields of the finance world to the Ether-world of Internet marketing.

“I have learned so much from them. I read their research papers. Their theories and findings are enlightening,” he said. 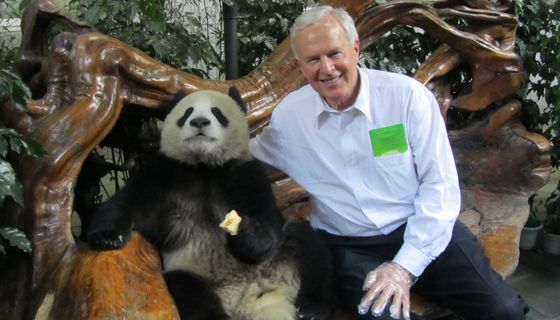 ASM Dean Doug Brown and a panda during a trip to China.

The faculty, he notes, have doubled the number of research publications produced in the last few years. “And it comes from both the veteran profs and the newbies,” he said. Brown added that they are also active in service at UNM, in their fields and in the community.

If he can’t hire them, Brown brings them in to share their expertise with students and faculty. “I’ve been active in the community and so I have lots of local acquaintances,” he said. Such as people who can give you a pass to all MLB parks for an entire year.  Through his friend, Ann Rhoades, he recently had Garry Ridge, president and CEO of WD-40, speak at the school.

Others he’s brought in deliver the same message: “Don’t give up!” Katy Jetter came to UNM to describe how she broke through the “good ole boy jewelry network.” “She explained how 96 percent of the world’s opal comes from her native Australia.  But opal jewelry was dated and not modern or attractive to consumers. She updated how the stone was presented in jewelry with modern design and now has a thriving business globally.” he said.

And speaking of creative endeavors, Brown and Dean Kym Pinder from the College of Fine Arts collaborated on creating the Arts Management program.

Another collaboration Anderson established is with computer science and engineering. “Information assurance, cyber-security are huge, hot topics. We collaborated with the FBI on a $3 million renovation of a building on south campus to develop a Regional Computer Forensic Lab, one of only two such collaborations in the nation,” he said. “It will work with law enforcement at all levels to solve cybercrime.”

His focus is sharp on student success. “There’s always a student angle in this. We got a National Science Foundation grant for $1.8 million for scholarships for Information Assurance students.  Our training will help these students get good jobs,” Brown said. 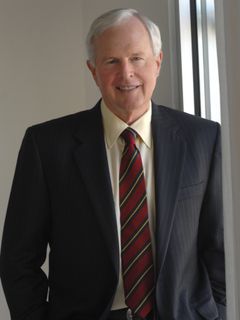 In 2011, the Rick and Debbie Johnson Marketing Center was created. It is a point of pride because the $1 million in gifts and pledges gives students resources for experiential marketing. “Experiential education is big. Student teams from the Small Business Institute consult with small businesses in the community. Through the Institute,  Dr. [Raj] Mahto grew the number of teams from six to 50 or 60 that are consulting with small businesses,” Brown said. He added that the small businesses are charged $500, which brings in $30,000 per year to support the program.

New Mexico Family Business Alliance is a program that ASM took over with a “six figure gift for support.” Linda Parker, an employee benefits consultant, and her husband Jim, an attorney, initially developed the NMFBA.  “The mission is to help family owned businesses deal with the unique dimension of running a family-related concerns,” Brown said. He said they face distinct opportunities and challenges, such as a spouse who is underperforming in the job, as well as succession of ownership. Brown said that Stacy Sacco, finance lecturer and director of WESST’s Rio Rancho Regional office, now runs Anderson’s Parker Center for Family Business.

Brandon Haines and a board of trustees from various organizations founded the Chief Financial Officers Academy. “In 2012, when Brandon retired, ASM took it over to give the CFO Academy an increased ability to market its events and develop stronger ties with the business community,” he said.

Brown is proud of the ASM Advisement and Career Services team of Tracy Wilkey, Natalie Mead and Kate Williams. “They provide sensational career services and advisement. They have greatly expanded employment opportunities,” he said.

With the Executive and Professional Education Center, ASM is able to provide Executive MBA degrees, as well as non-degree certificate programs. “We can offer eight-week courses in cost accounting, for example, to meet a particular need,” he said. Audrey Arnold, manager of the center, has grown the program from 100 to 400 students.

One thing Brown didn’t get to quite finish is getting ASM into a new building. He got the ball rolling, however, with the $5 million McKinnon gift. Brown said they are seeking an additional $5 million in private funding, and some funding from the New Mexico Legislature. “It’s a $48 million project,” he said, “so the balance will have to come from bond financing.”

Brown tried to retire twice before. The last time was 10 years ago when his colleagues presented him a report card with an “F” on it at his retirement party because he had already agreed to take a job as State Treasurer. This time, however, he plans to “throw away the alarm clock.”

He and Sarah plan to remain in New Mexico. “We love New Mexico, but we plan to spend more time in California to see the kids and grandkids,” he explained.