Mark Attwood is one of three Tamarind-trained printers at The Artists' Press in South Africa. In a slideshow of the studio, a door covered with the signatures of visiting artists and artisan printers demonstrates the domino-effect of Tamarind's reach.

"People said it was impossible, that there was no market for lithography in South Africa," Attwood said. Lithography was what he knew, so he ignored the grim predictions and set out to create a market. "Sometimes limited options are a good thing," he said.

In addition to providing a space for creating fine art prints, they use some of the proceeds from print sales to provide clothes and other resources to children in need.

The need to generate funds – the studio is funded solely by selling prints – doesn't stop them from taking risks. "We try to do one project a year which is largely experimental and we have no idea what the result will be," Attwood said.

For example, an artist who draws with smoke on paper wanted to try more durable smoke prints. "The resulting prints are a lot grainier than the original drawing, but they have a lovely quality of their own," Attwood said.

Tamarind graduate Plinio Avila Marquez said the re-emergence of printmaking took a different direction in Mexico than in other countries. While color printing grew in the United States, prints from Mexico remained largely black and white. Prints typically are politically-oriented and are produced and distributed cheaply. "At the same time as in the U.S. people were having conversations about the quality of prints... that didn't happen in Mexico," he said.

Museo Grabado has a small workshop – supporting etching and digital printing, as well as lithography – with a mission to pursue printmaking as an art form. Mexico's National Center for the Arts runs the museum. Avila Marquez said most of the art was donated by artists as a thank you for printing there.

He said artists applying to use the workshop must explain why a particular print form is necessary to the concept of a project. "I need to feel that there's a reason to do it specifically in lithography," he said.

He said they moved entire studio for one day to work with British sculptor Antony Gormley. "He was a very, very warm person," Avila Marquez said. "But he's a huge artist. I was really scared of working with him."

Helsinki Litho in Finland diverges from the more experimental bent of the other presenters. They exclusively print lithographs, mostly on the traditional stone slate. "We are fundamentalist in this respect," said Kalle Berg, one of three Tamarind-trained printers at the studio.

Berg said the 1990s were "a lost decade" for lithography in Finland. Helsinki Litho was created to correct that. He said Tamarind's method served well in re-establishing lithography "because it's easily transferable. It's also written in the book." Tamarind has produced several manuals, including the recent, comprehensive "Tamarind Techniques for Fine Art Lithography."

Berg said Finland has only one higher education art school, which generally isn't friendly to printmaking. Students "graduate without a sense for lithography and sometimes with a prejudice against graphic arts," he said. "Wherever possible we try to have artists fresh out of the schools... It puts financial pressure on us, but it's what we need to do."

Helsinki Litho is funded by renting use of the press to artists, selling prints and offering workshops. Berg said 100 artists have studios with a block from Helsinki Litho, so they're well positioned to promote the business.

"Many people when they come by initially, they come again because we have fun. It makes you feel kind of like being in a rock band, and it makes you wonder how long it can last," Berg said.

While other studios have created new or reborn markets, Keystone Editions in Germany, the home of lithography, works to diversify a well-established market.

Keystone Editions just opened in May, after Tamarind-trained printers Sarah Dudley and Ulrich Kühle traveled for several years working on lithography and other print projects in Europe, Africa and Australia. Dudley said they were "vagabonds having no fixed address, just going from one project to the next" before settling in Berlin.

"We felt at home there" Dudley said. "The most difficult decision we have to make on a weekend is which gallery opening we should go to."

To stand out from the crowded fine art print scene in Berlin – including one traditional lithography workshop – they decided to focus on more unusual, experimental projects, such as 3-D lithographs, combining lithography with digital printing or Dane Mitchell's work using the interaction of ink with perfume.

Keystone Editions also offers workshops for artists, including a crash course in collaborative printmaking, where "they can see what it's like to work with a printer," Dudley said. They also plan to offer workshops for collectors.

"Without Tamarind, we wouldn't have been able to do this," she said. 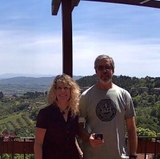 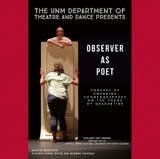 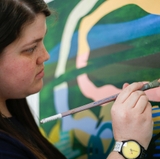