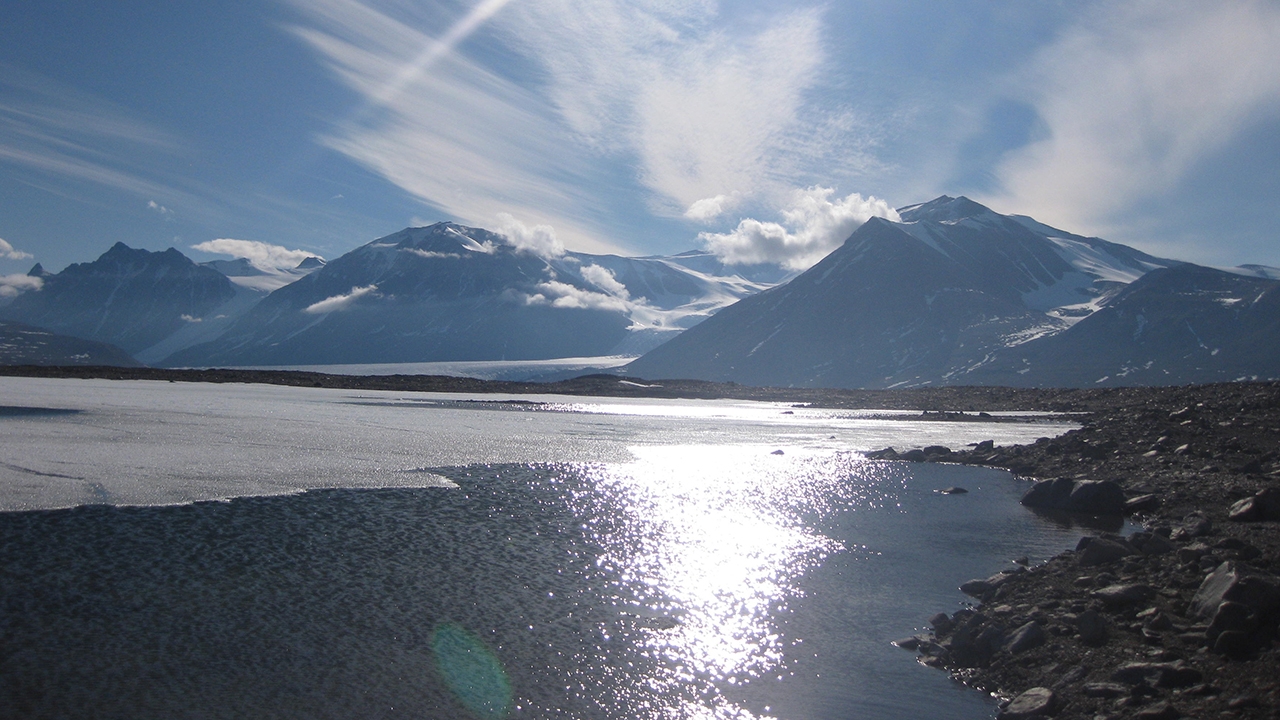 The view on a hike back to the F6 camp from a sampling site near Lake Frxyell. 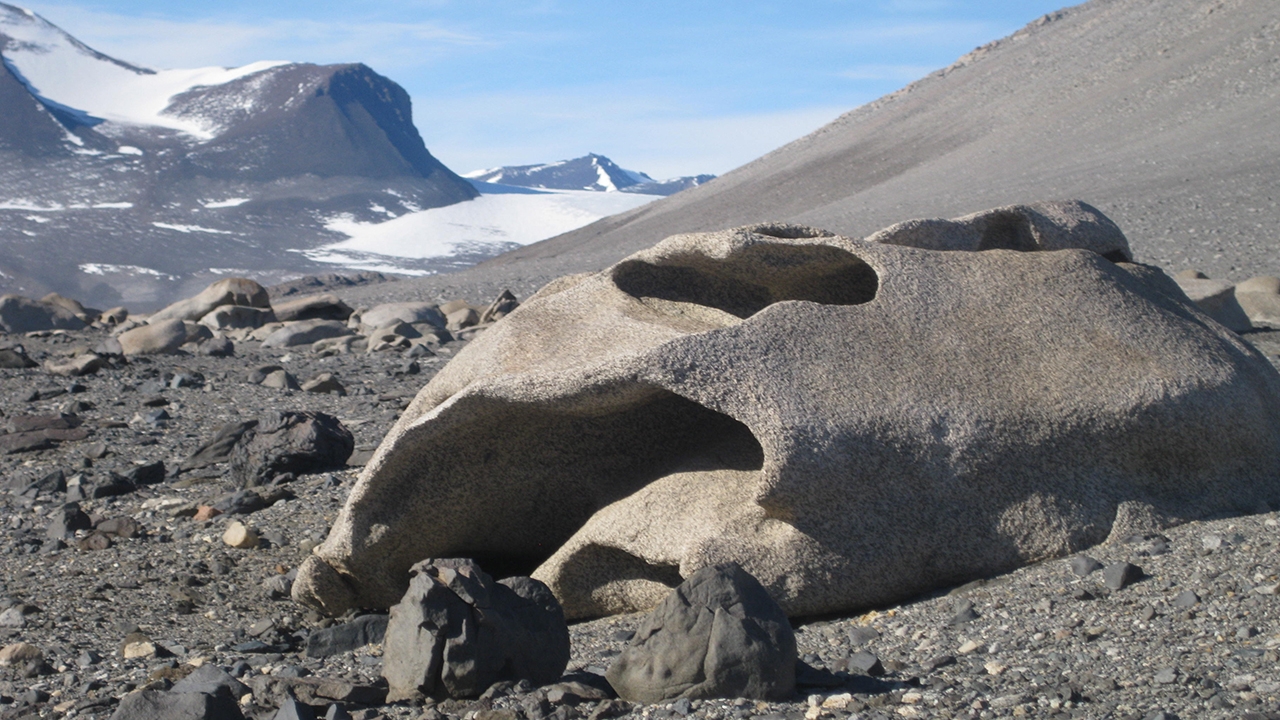 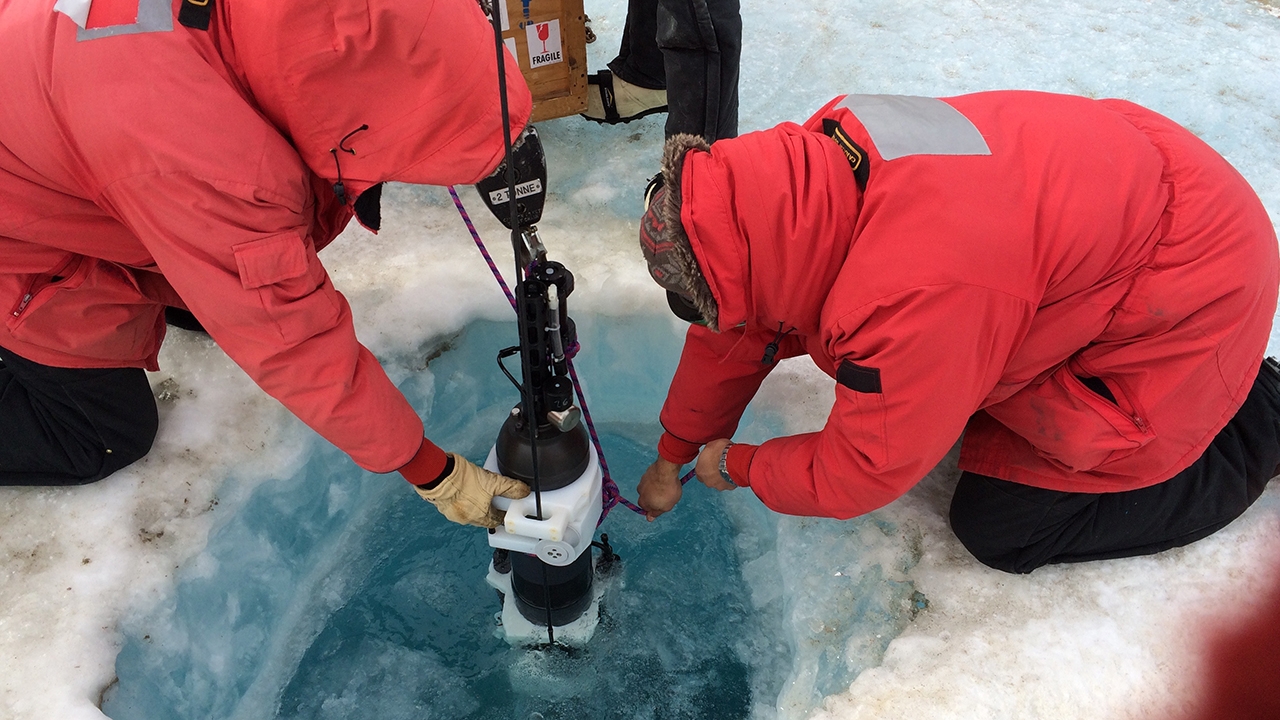 Instruments allow researchers to autonomously sample the water column and enabling the capture of data year-round. 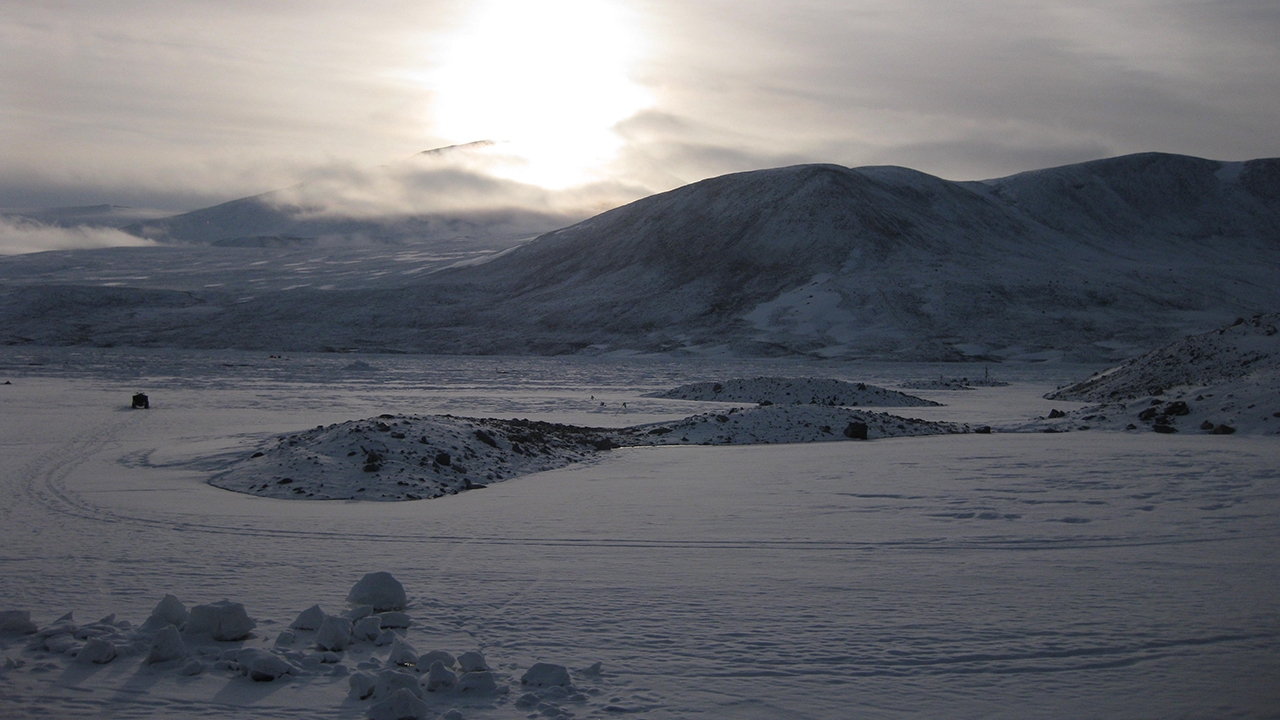 View across Lake Hoare in Taylor valley from outside main camp at 3 in the morning. 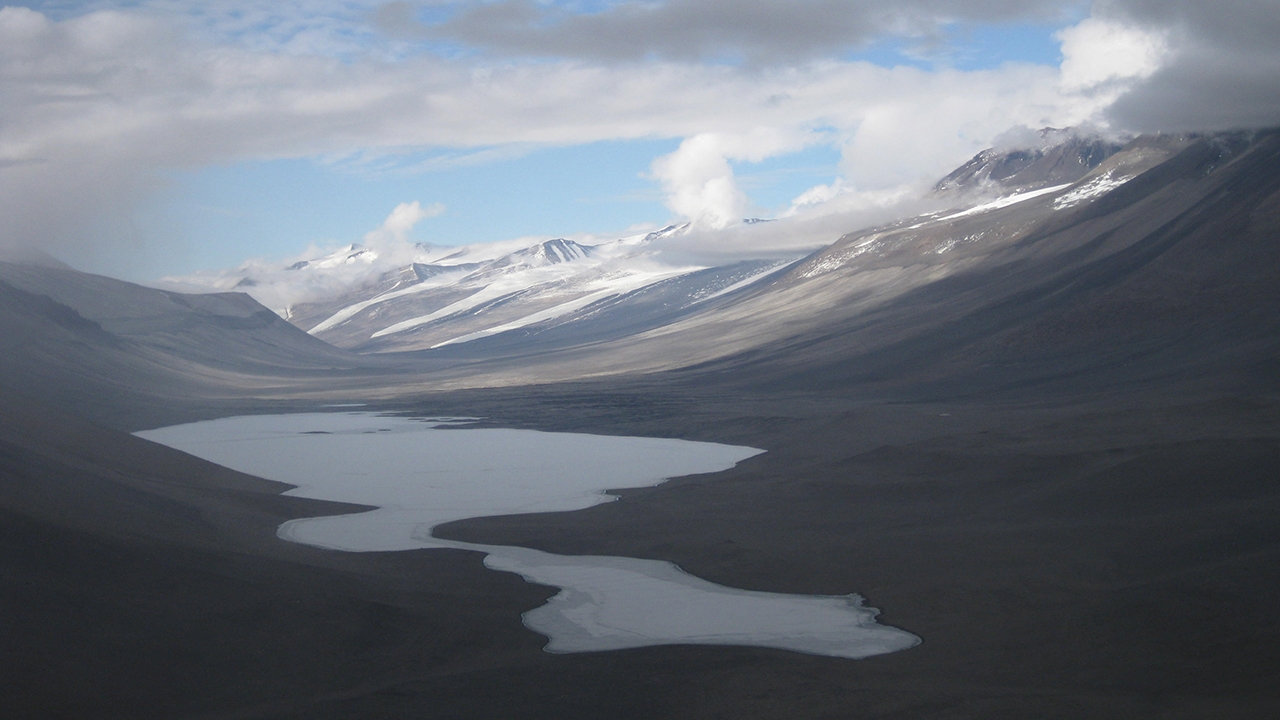 Helicopter view of a lake in the McMurdo Dry Valleys. 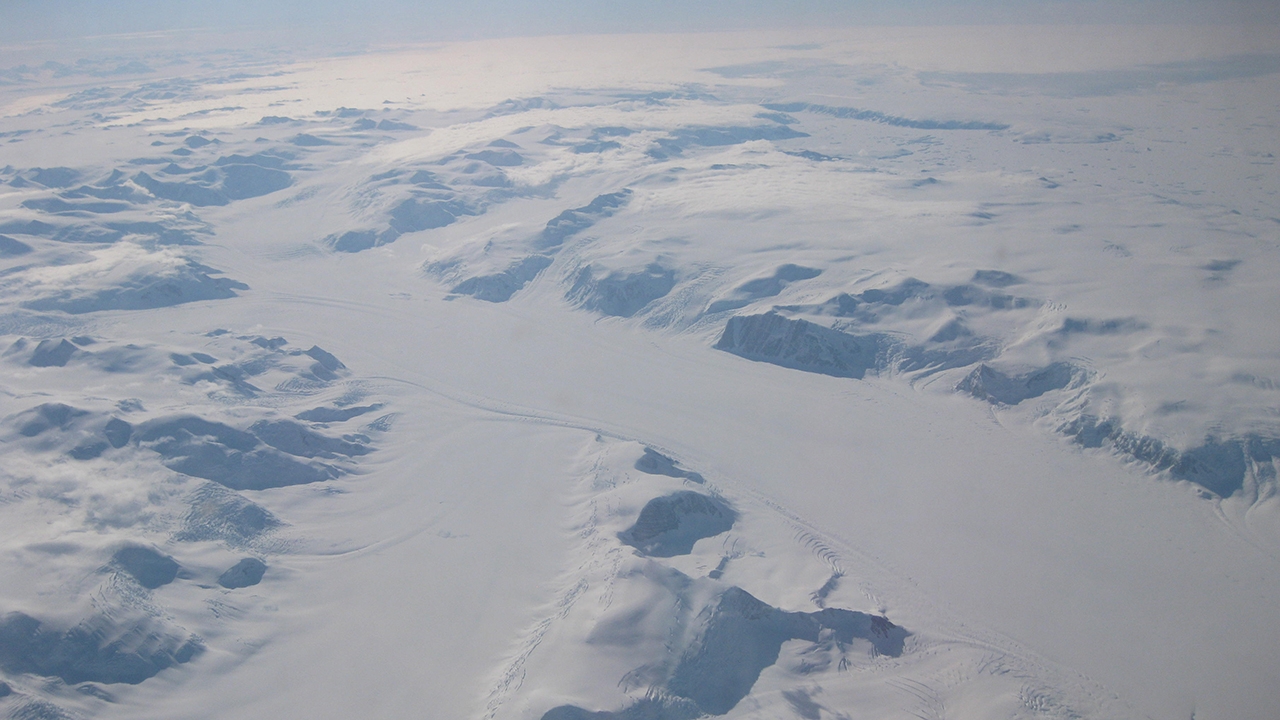 The view of Antarctica on a flight from Christchurch to McMurdo.

Finding answers in the coldest place on Earth

For the past 30 years, scientists at The University of New Mexico and throughout the world have been conducting a large-scale ecological study of the coldest place on Earth in order to understand how life exists in inhospitable environments, and how climate change is affecting their survival.

The work being done at the McMurdo Dry Valleys Long-term Ecological Research (LTER) project in Antarctica is not only improving our understanding of this unique ecosystem but providing a blueprint for identifying the effects of past and present climate change throughout the world.

Based at the National Science Foundation’s McMurdo Station, and one of 28 LTER sites, the Dry Valley’s LTER is studying the largest ice-free area on the continent. Between the wide areas of open soil are stream channels that connect glaciers to permanently ice-covered lakes. In this environment, researchers must work in temperatures that range from freezing to less than - 40°F. 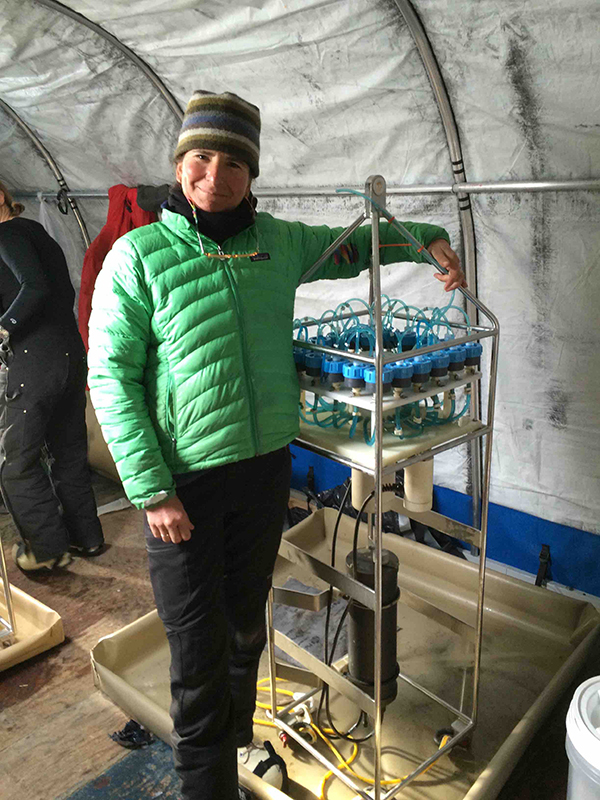 Despite the bitterly cold temperatures, however, there is an ecosystem of microorganisms, mosses, lichens, and a small group of invertebrates. The streams and lakes in which they live respond to changes in the environment immediately, making this desolate area a prime spot for learning more about the effects that these changes have on the environment as a whole.

Biology Professor Cristina Takacs-Vesbach has been a co-principal investigator (PI) on this project since 2011 but her involvement in it goes back to its beginning when she was a graduate student at Montana State University. As a microbial biologist, Takacs-Vesbach uses molecular biology methods to investigate the diversity of microorganisms in their natural environment.

On the McMurdo LTER, Takacs-Vesbach is studying how aquatic and terrestrial organisms respond to increased moisture and nutrients that arise from the increased thaw in the area.

Tyler Mackey, an assistant professor in the Department of Earth & Planetary Sciences, will become a co-PI on the project next year and is studying sediments that land on microbial mats found under the ice of the lakes in the McMurdo Dry Valleys. Enough light gets through the ice that photosynthesis occurs. Mackey is running experiments to understand predicted changes such as decreased light or increased sedimentation.

As members of the McMurdo LTER, both Takacs-Vesbach and Mackey are part of a team of over 200 people that includes researchers with various expertise, postdoctoral fellows, undergraduate and graduate students, and multiple collaborators.

Of this group, 31 are scheduled to deploy in the current season which lasts from October through February. Some researchers stay in Antarctica the entire season; others stay for four to six weeks.

“The most rewarding aspect has been the relationships I have with my collaborators,” Takacs-Vesbach said about the team. “Many of us have known each other for 30 years and worked very closely together in the field and to solve problems, develop experiments, decipher unexpected experimental results, and we have gone through many of life’s milestones together. My co-PIs are some of my closest friends.”

It is these relationships that have bolstered some significant discoveries over the past 30 years. One of these is the effects of cooling in the Dry Valleys between 1986 and 2000 that resulted in thicker ice which reduced meltwater and photosynthetic activity and saw declines in soil invertebrate populations as well as phytoplankton productivity. 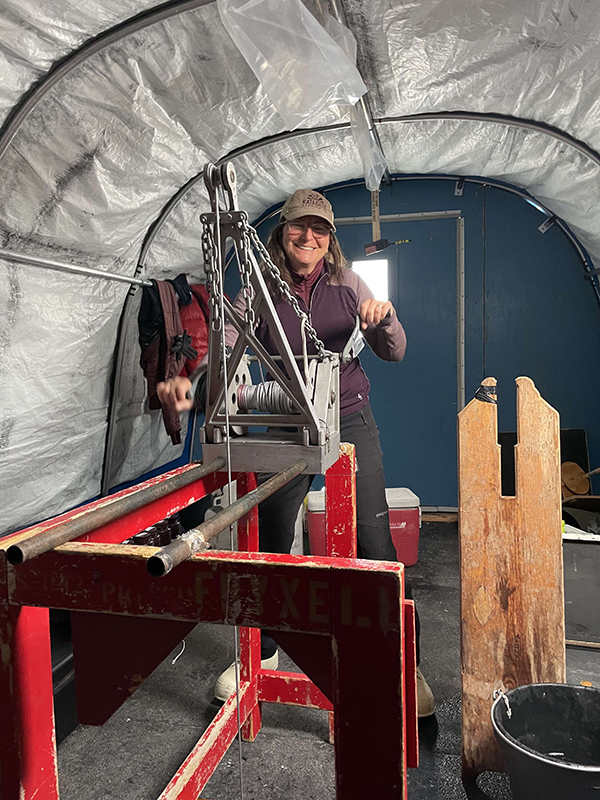 Then, in 2002, researchers recorded one of the warmest summers on record – called “the flood year” - which resulted in thinning of the lake ice covers and the highest stream flows recorded in Taylor Valley.

Emily Reynebeau, a Ph.D. candidate in Biology, is one of the 31 researchers who traveled to McMurdo this season. Reynebeau is part of a team that is studying the chemical and biological aspects of the lakes. Her particular focus is on the prokaryote (bacteria and archaea) populations.

“The lakes of the Valleys are very special, and unlike other lakes in the world,” said Reynebeau. “The permanent ice prevents seasonal turnover, as seen in most lakes, creating very distinctly stratified layers in the water. The biological, chemical, and physical features of each lake are totally different meter to meter.”

Caitlin Wolf (Biology, 2015) reflected on her own experience getting to conduct research in the McMurdo Dry Valleys as a student. “We're all there to contribute to the same idea - that scientific research is important enough to live in a nearly inhospitable environment for the sake of learning about the environment itself,” she said. “I'm very thankful I was given the opportunity to explore such an interesting place so early in my career.”

Ultimately, their work is intended to be shared with the external community, which is why several outreach and education efforts have been initiated in K-12 schools throughout the country as well as the broader public. There are even plans for a museum exhibit at the Colorado University Mountain Research Station.