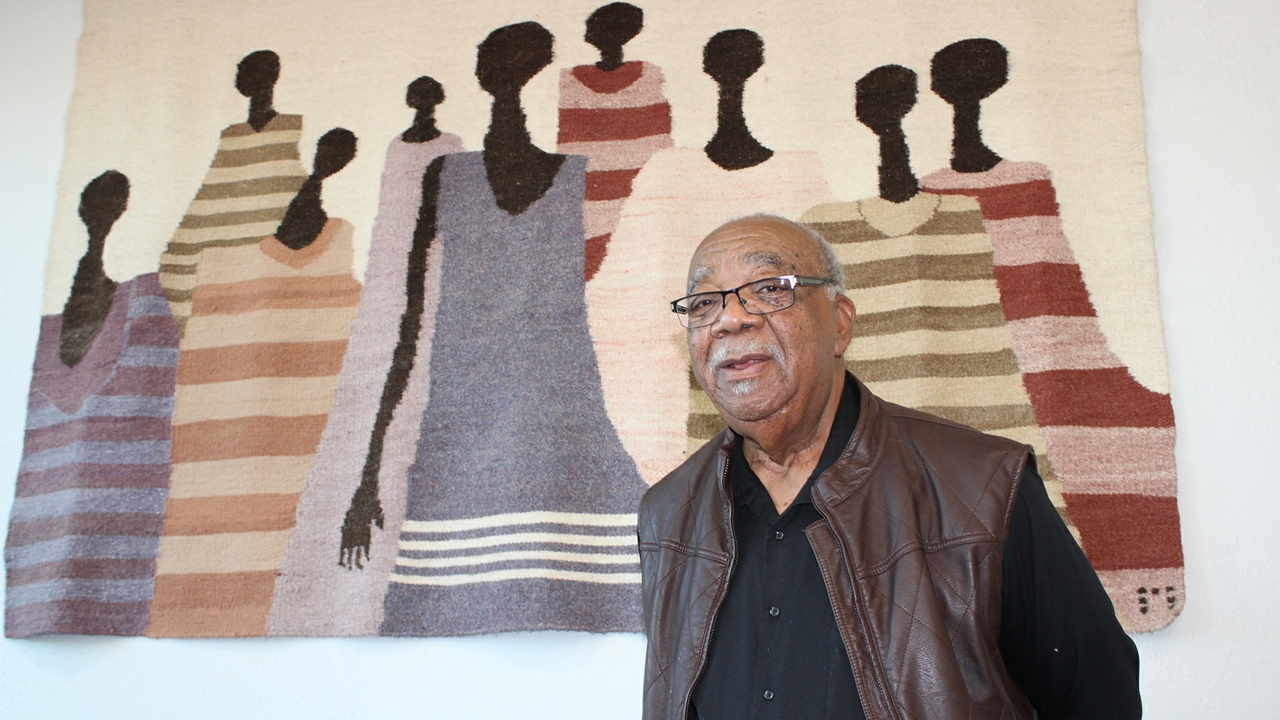 Charles Edward Becknell Sr. is an example of living African American history and New Mexico state history. Becknell Sr. was the founding director of what is now The University of New Mexico's Africana Studies program directed by his son and namesake Charles Becknell Jr.

Becknell Sr. grew up in segregated Hobbs, N.M., in the 1940s and 1950s. He went on to get his Ph.D., establish the African American studies program at UNM, serve on the cabinet of two New Mexico governors, and become an activist, pastor and author.

"My challenge was to open up the world of Black, Blackness, to these students so that they’re more aware. And not so much for their sake but for their children’s sake and for the sake of the community." - Charles Edward Becknell Sr.

As a child in Hobbs, he and other African American students endured the taunts of white children and the unfairness of a system tilted against people of color. He recalled one incident where three white boys called him a racial slur and when he punched one of them, he was paddled severely by the principal. The white boys got off without any punishment.

In junior high, his father received a set of The Complete Works of William Shakespeare and young Becknell spent summer vacation reading A Midsummer Night’s Dream. When he returned to school in the fall, the teacher asked the class what they did over the summer. Other children had gone fishing and camping.

“They got to me and I was just bursting… ‘Charles, what did you do?’ ‘I read Shakespeare’s Midsummer Night’s Dream’,” he responded, and then added, “I still remember the look on her face. ‘Oh, no, you people aren’t ready for that yet.’ Those words still resound. ‘You people.’”

In spite of the challenges, he had perfect attendance in school. Well, except for one day in 10th grade when he played hooky and went to shoot pool with a group of friends. His stepfather found out but that evening at home ignored him. Becknell uneasily went to bed that night, putting on two pairs of pants to soften any blows and wondering when the inevitable comeuppance was going to happen.

At 5 a.m. the next morning, his stepfather woke him up and took Becknell with him to his job as a handyman, mowing lawns and doing other hard labor. All day, they worked with no breakfast and no lunch.

“He worked me all day long and he said, ‘You can either do this the rest of your life or you can go to school. I never missed another day.”

“My mother told me, ‘Get a good education. That’s something the white man can’t take away from you,’ and I knew when I left home I couldn’t go back the same way I left. And my whole life was centered around making my mother proud of me, and I miss her,” he said in the video.

Becknell went on to get a basketball scholarship, got his BS degree in Education, an MA in Secondary Education, and studied at Pepperdine, Duke, and Columbia universities with a special interest in Black studies before returning to New Mexico. The push for African American studies, like Native American, Chicano, and women’s studies, came on the heels of Black student activism, the Watts riots, the war on poverty, and the rise of Dr. Martin Luther King Jr. and the civil rights and anti-war movements of the 1960s and 1970s.

At Columbia in 1969, Becknell took an African American history course. The first day there were about 300 Black students waiting for class to start when the professor walked in. He was white. Many students walked out, but Becknell stayed because the professor was one of the foremost experts in Black history. Students were upset and stayed away because they didn’t want a white man grading their papers. Becknell approached the professor and suggested since he had a master’s degree, he was qualified to grade the papers if the students came back to class. Word got out, students returned, Becknell graded papers, and even ended up with a stipend for his work.

He returned to New Mexico and started teaching Black history at Albuquerque High School, even though there were more Hispanic and white students than Black. About the same time, UNM students were pushing the administration to start an African American studies program and suggested Becknell. The administration balked because Becknell had a master’s degree at the time but not a Ph.D.

“Do you have any other professor with this background,” he asked, presenting his Columbia credentials. The administration admitted it did not and so Becknell became the director of UNM’s first black studies program. Due to a dearth of professionals available with Black studies backgrounds, he also became a teacher, counselor, advisor, and ombudsman.

Establishing the department was a challenge. Students were clamoring for something more than programs built around white, European-descended men. It was a volatile period on campuses at UNM and across the country. Becknell’s memories of entering his office for the first time are of the smell of tear gas and the National Guard on campus.

There was no academic blueprint for a Black studies program and resources were limited so Becknell reached out to the prominent Black leaders of the times.

One ultra-conservative state legislator told Becknell about controversial Black activist Stokely Carmichael, “Over my dead body will that man speak at UNM… Well, he spoke,” he chuckled. As did Professor Angela Davis, civil rights activist Charles Evers, the brother of the slain Medgar Evers, and activist and politician Julian Bond.

“That’s what we had to do to get things done. I’m a firm believer if you have a need there is someone out there who can help you fill that need,” Becknell observed.

In the oral history video, Becknell recalled his son Charles Jr. being carried around the house on Carmichael’s shoulders.

Becknell said his biggest challenge as the founding director was getting out the word that the Black studies program was available and children could come to UNM and get an education.

“The challenges were many, OK. I wanted to be sure, my first challenge, that our students were treated fairly and they could pursue their academic work here on this campus without a whole lot of external type things. My challenge was to open up the world of Black, Blackness, to these students so that they’re more aware. And not so much for their sake but for their children’s sake and for the sake of the community, they would have this information, they could go out and tell others about this information,” he said in the video.

Soon after the Black studies program was established at UNM, Becknell moved on. Then-Gov. Jerry Apodaca asked him to join his newly formed Cabinet and he stayed on in the following administration of Gov. Bruce King. He also followed his calling to be a Baptist minister, as had his grandfather, father, four aunts before him, and also now son Charles Jr.

“It runs in the family,” he wryly observed.

Like his father, Becknell Jr. got his Ph.D., became a minister, and is the director of the Black studies program at UNM, now called Africana Studies.

Becknell is also an author. His most recent book published in October 2019 is titled Voices from the African American Village: It Takes a Village to Define a Community.

The book is a reflection of his own childhood in a segregated community and why he was so successful in life. Becknell explained that in the pre-civil rights era when he grew up, the African American community was referred to as a village. Parents didn’t have much education but knew it was important for their children. Mothers were strong disciplinarians, fathers were the final authority, and the elders, teachers, other villagers, and most of all the church, kept an eye on youngsters and looked after each other.

In the video, Becknell recalled chewing gum in church one Sunday morning.

“A lady in church, she was an usher. Chewing gum was unacceptable… She’d come over with a Kleenex in her hand, grab your jaws, and make you give up that gum” as his mother glared at him from the choir stand.

“But it was discipline and it was the school and the church and the home that really laid the foundation for who we – my generation – were all about.”

At the end of the video, Becknell observed, “We’re sitting at the table because of what somebody else did. I think it was Jesse Jackson that said the hands that used to pick cotton now can pick presidents and mayors and legislators. I appreciate what my parents did. I’ll never forget it.”