First of its kind research sheds light on mysterious fireballs

When University of New Mexico Physics & Astronomy Professor Greg Taylor turned on the first Long Wavelength Array (LWA1) station in 2011, he wasn’t exactly sure what they were going to find. Fast forward five years, and now, Taylor and recent Ph.D. graduate Ken Obenberger have detected and studied a strange, meteoric phenomenon no one else had ever seen.

The pair had discovered a new type of emission coming from fireballs streaking across earth’s upper atmosphere.

“When we talk about fireballs, we’re talking about large meteors that enter the earth’s atmosphere and explode,” said Taylor.

Using LWA1, a low-frequency radio telescope station made up of 256 dual-polarization dipoles, the team has tracked about 150 of these fireballs flying more than 90 kilometers (about 56 miles) above us in the sky.

What sets their discovery apart is the strange reaction taking place that allows their radio telescope to detect these meteors. Typically, when a space rock enters earth’s atmosphere it explodes and can be seen optically for only a few seconds. According to Taylor’s data, these fireballs can radiate radio waves for up to several minutes.

“The meteor burns up and produces this big trail of plasma and then somehow that’s producing radio emission,” said Obenberger, who graduated with his Ph.D. in May. “But, we still don’t really understand what’s causing that emission.”

Because this project is studying a previously undiscovered type of meteor emission, the research naturally produces a lot of questions for Taylor and Obenberger. And while they still have a lot to learn, they have been able to answer some questions.

Taylor said one of the more interesting results they’ve found is the altitude dependence of these fireballs. For the radio emission to occur, the meteor must be above the 90 kilometer threshold; any lower and the it acts like a traditional meteor. Obenberger believes this has something to do with atmospheric density. 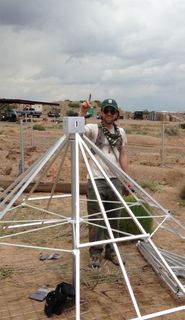 “At the higher altitudes, the atmosphere is less dense which means there are less air molecules for electrons to run in to,” he said. “So, the idea is that the electrons are radiating and in order to radiate they need to shake and move around. But, when the atmosphere is thick they’ll run in to those molecules more frequently and lose their energy. At higher altitudes the air is thinner and electrons are free to radiate for a longer period of time.”

Because of that interaction, the project is also giving researchers the ability to learn more about the upper atmosphere, a region that has been difficult to study in the past. In the future, the team hopes to learn more about that interaction and discover where all the energy in these fireballs is coming from. Taylor believes the research may also be able to answer some much bigger questions.

Taylor and his team recently finished construction on a second telescope station, at Sevilleta National Wildlife Refuge, that will help increase the resolution and fidelity of the radio imaging. Taylor hopes to continue to secure funding to be able to build even more stations in the future.

So far, Obenberger has been the first author on four publications stemming from this research, with two more papers in the works. Now working on his post-doc at the Air Force Research Lab in Albuquerque, Obenberger said this project was a dream come true for a young researcher.

PAIS, a new state-of-the-art high-research science facility, will replace the current Physics & Astronomy building on north campus and will be constructed at the site of the existing City of Albuquerque water reservoir, just north of Central Ave. between Yale Blvd. and Cornell Dr.

The 137,000 sq. foot facility will have research labs, classrooms, office space and modern infrastructure to support the projects being conducted by Taylor and other faculty in numerous departments.

“It would be terrific to have modern lab space to be able to develop the tools needed for this kind of research,” said Taylor. “We maintain the two telescope stations and develop ways to improve them in the lab, so having better facilities would be really nice.”

A bigger space would also give Taylor the opportunity to use an anechoic chamber, a room designed to keep out pollutant radio waves so researchers can better test and develop detection methods. The department already owns the chamber, which Taylor said costs upwards of six-figures, but must store it in pieces since their current lab does not have the appropriate space to house it.

The facility, which will cost more than $65-million, would be the largest building on main campus. Right now, the majority of that money would come from bonds, with New Mexicans slated to vote on a General Obligation Bond package this November. If approved, the facility could be completed by 2019. 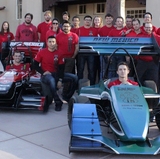