Distinction at the University of New Mexico is defined by two characteristics: a long meritorious career and a bold defining professional moment. The recipients of the 2014 UNM Presidential Awards of Distinction exemplify both. President Robert G. Frank has announced Governor Susana Martinez and Dr. Howard Yonas, distinguished professor and chair of the UNM Department of Neurosurgery, as this year's honorees.

“Both Gov. Martinez and Dr. Yonas have made critical contributions to the health and well-being of New Mexicans; one through policy, the other through practice,” Frank said. “I am pleased to recognize their outstanding accomplishments and to express the high regard we have for the impact they have made on the lives of so many in our state.”

Frank established the honor to recognize outstanding career achievement, scholarly excellence, leadership in a profession, noteworthy public service or humanitarian endeavor. It is commemorated with a bronze medallion displaying the UNM Presidential Seal on one side and a howling lobo on the other.

In selecting these two honorees, Frank specifically focused on how their work has impacted health care throughout the state – Gov. Martinez through decisive moves that expanded and reformed health care coverage in New Mexico, and Dr. Yonas through an innovative telemedicine network that spreads specialized care where there is none. 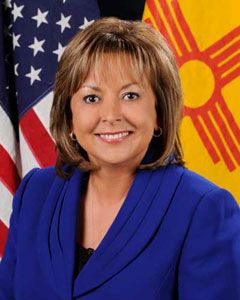 In response to numerous federal health care changes, the Martinez worked with the state legislature to establish a health care exchange and dramatically increase the number of health care providers, particularly in rural areas where shortages were pronounced.

She also reformed and expanded Medicaid, providing basic health care and preventive services to up to 205,000 more low-income New Mexicans – a move that bucked the conventional thinking of many in her own political party.

“At the time, she was only the second Republican governor to do that,” Frank said. “She showed pragmatic thinking and personal courage in putting the needs of New Mexicans first. That type of commitment and boldness is what exemplifies both of this year’s honorees.”

Yonas is a nationally recognized cerebrovascular surgeon who was instrumental in the formation of the Department of Neurosurgery at UNM.  In the past decade, he has initiated several key neuroscience projects including developing a state-of-the-art Intensive Care unit and a multi-specialty outpatient clinic.

“With this cutting edge approach, Dr. Yonas and his team are basically bringing a neurosurgeon to hometowns across New Mexico,” Frank said. “UNM will be able to provide face-to-face consultations via the internet with doctors, patients and their families who live in parts of the state that lack this specialized care.”

Frank will present the awards during UNM’s fall commencement ceremony on Friday, Dec. 12. Martinez and Yonas are the third and fourth recipients of this prestigious honor established last year.