From Russia with love

Larisa Dmitrieva is still growing into life as Julia Lambright, an emancipation of sorts from a difficult past. She grew up in a Moscow orphanage during Soviet Russia, where she felt the stark contrast between life inside and outside the orphanage walls.

Today, she lives in Albuquerque, though a part of her soul remains in Russia. In order to make peace with her past and give voice to a difficult childhood, Lambright, a University of New Mexico MFA student, chose to explore her story and share it through the language of art.

One of Lambright’s first assignments at UNM was to create a self-portrait for a photography class. “The only picture I have from my youth is a small black and white one from when I was eight,” she said. “It’s the only record linking me to my past and confirming that reality. This assignment was difficult, but it started me down the road of self-exploration, to a place where I could start seeing beyond the image in the mirror into my soul.”

Orphan life in Soviet Russia
Years of war, suppression and social upheaval shaped the lives of generations of children during the Soviet Union (1922-1991). Shortly after its dissolution, with more than 20 percent of the Russian population living under the poverty threshold, the number of orphans began to rise. The orphanages were built to protect, educate and help children without parents prepare for life outside its walls. But somewhere along the way the physical barriers created mental ones.

“The art installation was my tribute to New Mexico. I wanted to express my gratitude for the new life it has given me. I feel like I’m on vacation here, especially when I go back to Russia to visit. The purpose of art is to open the mind and feed the soul. That is certainly what this work did for me.” - Julia Lambright

Physical orphans lose their parents through death, but social orphans, like Lambright, have living parents who either gave them to the state or conversely had them taken by the state due to alcohol or drug addiction, or neglect due to poverty.

“When I was four, I discovered that I had a talent for art,” Lambright said. “I saw a picture I imagined my mother would like and with pencil fashioned it into a postcard. I wanted to mail it to her in the hope she might reclaim me. But another orphan girl, who I think was jealous, destroyed it. I was devastated.” 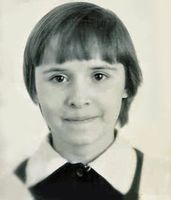 Soviet orphanages functioned on a three tier system. Toddlers were placed in "baby homes" until age three. If a child was not adopted, which most were not, he or she was sent to another facility where children ranged in age from four to six. The last home they moved to was for the seven to "graduated" group, who at 16 were on their own to attend vocational or trade schools. Most of these children had lived in the orphanage environment their entire life and had no idea how to live independently.

A mother comes calling
According to Lambright, all the children wore the same drab colored, recycled uniforms and had their hair maintained in a short similar style. “We were instantly recognizable to people outside the orphanage. They would look at us with such sympathy that it made you feel different, separate, like an outcast,” she said.

Lambright met her mother when she was seven years old. The woman had recognized her from a crowd of over 30 children. Lambright attributed it to a mother’s instinct. “She was blonde, pretty. She took a comb from her purse and combed her hair as she walked toward me. I stared at her as if I was looking through a camera lens. She passed all the children in my orphanage group, then bent down to hug and kiss me. No one had ever hugged or kissed me before. It felt strange,” she said.

Physical affection was not allowed in Soviet orphanages. With up to 250 children living in a single facility, it would have been impossible to show love and affection to every child, and favoritism was frowned upon.

“I don’t remember how long I spent with my mother that day,” Lambright said. “But I remember that she promised to come back for me and take me home. A month later, she came again and brought food, stuff we never saw in the orphanage, like nuts and candy. That second visit was the last time I saw her. She never came for me like she said she would. It was soul crushing.”

Larisa becomes Julia
Children about to graduate from the social system had the right to see their file. Lambright had grown close to house governess, Galina Feodorovna, first and last name was compulsory when addressing her, and inquired after her mother. The governess hesitated and then said, “This is not a woman you should concern yourself with. She is not worth it.” The blunt statement jarred Lambright, but she said things shifted after that. “My mother must have had reasons for what she did,” Lambright said. “I’m not angry with her. Wherever she is, I hope she’s happy.”

At the age of 10, Julia Lambright, then still Larisa Dmitrieva, was adopted by a single woman in her 40s. She was a piano teacher who had visited several Moscow orphanages before choosing Lambright. 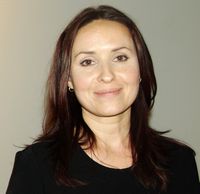 Lambright receives her Masters in Fine Arts in May.

It was a lengthy and difficult adjustment period for both women. Lambright had asked her adoptive mother if she could take art classes, but was instead forced to learn and practice piano for five years. Her desire was to see Lambright perform at the Moscow Conservatory one day.

“As I began to mature, things improved between us,” Lambright said. “I came to understand her better and to feel sympathy towards her. She had a difficult life herself…and she gave me much more than my mother did. One day, she changed my name from Larisa to Julia. I was okay with that. It felt right, a way to start a new life,” Lambright said.

A new life, with echoes from the past
Time passed and Julia Dmitrieva met her future husband while both of them were in Prague on business. She was a makeup artist and he, an engineer at Los Alamos National Labs in New Mexico. After a few years of courting, she immigrated to the United States where they wed. That was 12 years ago. “I’m living the dream,” Lambright said. “I have a wonderful daughter and husband. I have a family.”

As a Russian now living in the U.S., Lambright found herself wanting to renew the traditions as well as spiritual and cultural values of her birthplace. Due to her physical dislocation from Russia, she felt a growing need to explore the sacred art of Russian icons. She returned to Moscow to study iconographic canons and subsequently some of the original formulas and techniques. 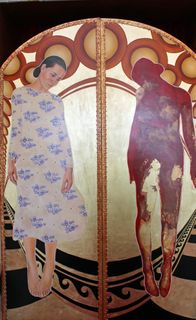 The center panel from the installation titled The Gate.

The artist breaks free
For her MFA thesis, Lambright created an installation art project which was recently exhibited at the South Broadway Cultural Center in downtown Albuquerque. The installation, containing 21 paintings in egg tempera, gold leaf and oil, divides into three sections, similar to the iconostatis of the Russian Orthodox Church, where panels bearing religious icons or narratives separate the church sanctuary from the nave.

Each of the paintings is secular and expresses a critique of post-Soviet life in Russia. Lambright said that the project had two purposes, “to represent the physical and spiritual realm in three-dimensional form, and the physical boundary crossing between Russian and American culture.”

“The art installation was my tribute to New Mexico. I wanted to express my gratitude for the new life it has given me. I feel like I’m on vacation here, especially when I go back to Russia to visit. The purpose of art is to open the mind and feed the soul. That is certainly what this work did for me.”

Lambright's work has been exhibited at the UNM Art Museum, Harwood Art Center, AC2 Gallery, the Northern Arizona University Museum and the Farmington Museum as well showings in Chicago and New York.