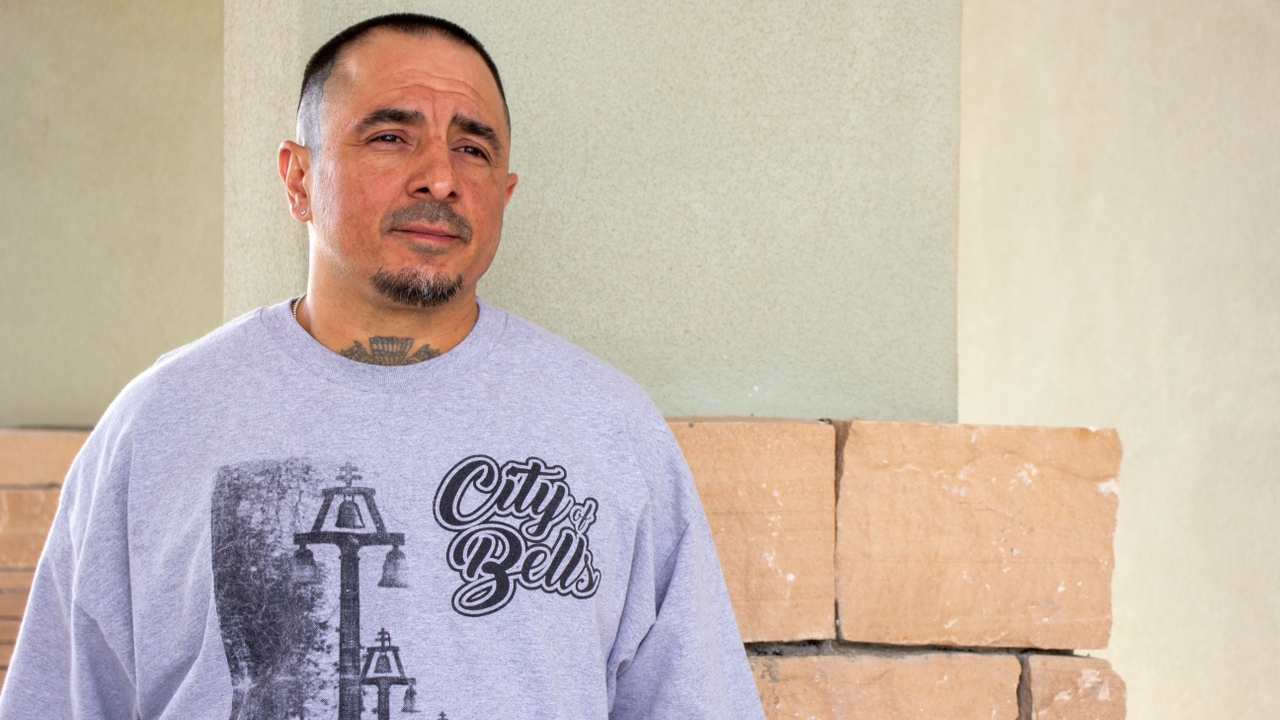 There are fall-down, drag-out hard knocks stories, and then there are stories about rising from ashes. This story is full of both.

Juan Juarez, 42, who was hired last December as a UNM-Taos academic advisor, is living a life he never dreamed possible. He’s eager to start helping current and prospective students get the most out of their lives — especially for young people who find themselves under the weight of questions such as, “What am I doing?” “Where am I going?” “Who do I want to be?” When it comes to exiting a dark, uncertain road and taking a positive, life-changing course, Juarez knows what’s he talking about.

He was born in Salt Lake City, Utah, in 1979. To escape from an abusive husband and absent father to her children in the early 1980s, Juarez’s mother packed up the car and took Juan (the “middle boy”) and his seven siblings (brothers and sisters — a pair are twin sisters) to Riverside, California.

In true Golden State fashion, Juarez wanted to be a surfer when he was a little kid. But as he got older, one of his sisters started hanging around gang members and bringing them to the house. While in middle school, Juarez didn’t know any different and thought they were “cool.” He followed them down their path.

Getting in a lot of trouble started for Juarez at age 16. After repeating four years of 9th grade, he gave up and dropped out. “I didn’t care about education. I didn’t think I could make a good life for myself,” he admits.

Life went downhill faster from there. At 17, Juarez found himself stuck in a revolving jail door.

“I was always running. I got beat up by the cops. So, I just ran from them every time they wanted to talk to me. I’d get stopped by cops all the time who were looking to bust me for probation violations,” he shared with a strained look on his face. “I was a problem child. I spent so much time in court.”

A judge familiar with Juarez said he would give him three years “off the bat” if he showed up in his courtroom one more time.

“When I was 24, I got fed up with the court system, being on probation ... with the path in general. And I didn’t want to climb the gang hierarchy in prison,” he said. A new direction was on his mind.

Juarez’s mother was born in Taos. Intending to free him from bad choices, she tried convincing her son to move back to her hometown.

“I grew up without a father. No father figure at all. I just ran around and did whatever I wanted, and I think that’s why,” Juarez expressed.

One day he looked in a mirror — not metaphorically — and didn’t like what he saw. His friends were dying violent deaths or going to prison. Some relatives were on trial for murder and other serious crimes. In a moment of clarity, he decided, “OK, let’s move.” Two of his sisters left for Taos at the same time. Other sisters followed later. His little brother had already left California for Taos, so Juarez moved to be with him as well.

Juarez laid low in his new home — wanting no trouble. Two years after arriving in Taos, he became a father. That’s the event that forever turned his attitude around. His days of feeling sad, angry, and depressed were over. The last thing he would ever allow was for his son to grow up without a father. Juarez didn’t want to see his son make the same mistakes.

His mother was acutely aware that not much was going well yet for her son or “boy,” as she calls him. He wasn’t getting into trouble but, he wasn’t moving forward. One day in 2005, without saying where they were going, she drove him to Our Lady of Guadalupe Parish where the High School Equivalency Program (HEP) was held. HEP was provided by Northern New Mexico College at that time. She dropped him off and drove away. He didn’t run. He didn’t complain.

For two years, he worked hard and became close with instructor Frank Jaramillo — the father figure and mentor Juarez never had. “I could read and I could write, but Frank taught me more. He pushed me to be there and stay there until it was finally done,” he recalled. “I did it. I remember passing all my tests. I was in shock when I passed the math test. It gave me a sense of pride I never felt before.”

Miriam Foronda, a teacher, UNM-Taos academic advisor, and a former chair of the Computer Technology/Science program met Juarez while he was working on his HSE. Like Jaramillo, “She saw a spark in me and made it a point to keep me on this path.” Before he took his final tests, she told him to come and see her when he passed. Foronda gave no more detail about her request. When Juarez passed in October 2007, he went to see her.

Foronda congratulated him while she typed on her computer. Keyboard clicks were the only sounds in the room for a few minutes. She stopped typing, looked up and said, “You’re going to college.”

“I was shocked. I thought, oh man, I didn’t plan on doing any of this.” Foronda had enrolled him at UNM-Taos. “This is where it all began. I always had a good experience here,” Juarez said. “No one treated me bad. I always got the support I needed.”

Core classes were conquered first. Then in 2012, he earned an Associate Degree in General Studies. He had a work-study job in IT. Juarez even served on the Student Government Association. He was volunteering at graduation in 2013 but didn’t realize he was officially getting his associate degree that day until Thomas Duran, graduation reader and UNM-Taos business manager, called out “Juan Juarez”.

“I was shocked ... again. That was the coolest thing — getting to walk across the stage for my HSE (at Northern Community College in Española) and associate degree,” he said with the same grin that was probably on his face that day.

Juarez, however, wasn’t done with school. He enrolled at UNM in Albuquerque where he earned a Bachelor of Arts in Art Studio in December 2015. “I thought I might be an art instructor or work in a museum,” he said.

His path, however, had other things in mind. When he left Albuquerque during breaks, he would always get a short-term job at Klauer Campus. Once those days were over, he couldn’t find another job elsewhere — he doesn’t know for sure, but believes some of that was due to his many gang-related tattoos.

“Times were a little different. Tats were kind of still taboo back then,” he added.

Juarez’s employment efforts kept leading him back to UNM-Taos because, “I always got the support I needed.” After applying for various campus jobs, he was hired by former Senior Project/Construction Manager Jim Pollard to help with a large campus inventory of products following the renovation of Río Grande Hall. After 1 ½ years, he completed the task. UNM Inventory Control thought it would take him at least two years. Juarez found himself in need of work after his short-term position ended with Pollard.

Juarez’s hard work had not gone unnoticed. Former IT Services Manager Dave Sooter and Nikki Maes, then-systems network analyst, trained Juarez to serve as IT tech support. “I proved my work ethic and pushed myself to be on top of my job at all times,” Juarez said.

“Juan worked with the team and learned technical skills, worked on his communications skills, and became an asset to the IT department team,” said Maes, current IT services manager. “He was proven to be focused and dedicated to getting the job done.”

While working in IT support, the thought crossed Juarez’s mind that his life experiences may be of value to young people who might feel lost like he did. He interviewed for a position as a UNM-Taos academic advisor. The rest is soon to be history.

Since December 2021, Juarez has been delving into the training process — just one more advisors’ training left to go in May. His days of helping students can’t start fast enough. “I’m really anxious to be where I need to be, to help the students,” he said.

There’s already a waiting list of young people he knows who want him to help them change their lives through higher education. “The entire advising department is very supportive,” he added. “I’m hoping I’ll start advising this summer.”

Juarez still pinches himself thinking of where he was headed in his teens and 20s and where he is today. He credits the birth of his first son for saving his life; “If not for his birth, I don’t know where I’d be now.”

His family has since grown. He and his fiancé have four kids — three boys and a girl. None of them will have to live without a strong, loving father figure. Juarez now knows who he truly is, what he needs to do to be successful, and is confident in his many abilities. And all of that, he kept repeating, is due to hard work and his positive experience at UNM-Taos.

“I love school. I love UNM-Taos. This will always be my foundation — my home.”