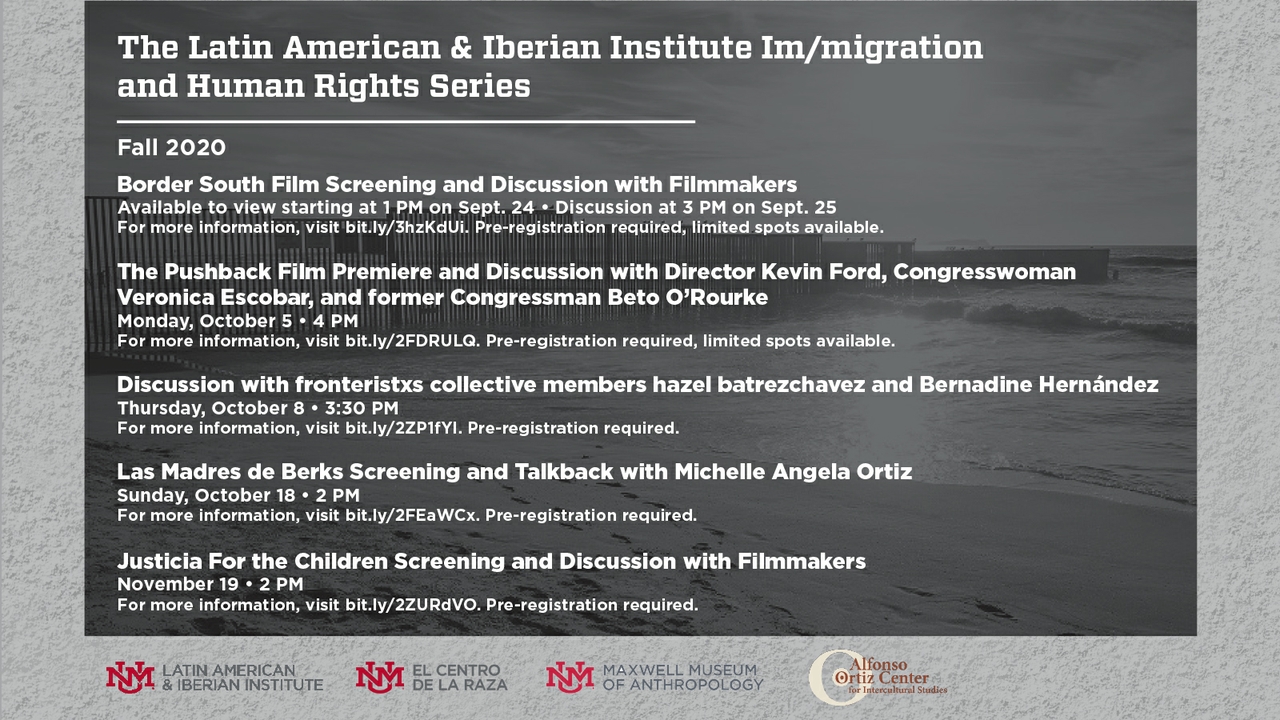 The Latin American and Iberian Institute at The University of New Mexico has announced its Fall 2020 Im/migration and Human Rights Series, co-sponsored by the Maxwell Museum of Anthropology, the Alfonso Ortiz Center for Intercultural Studies, and El Centro de la Raza.

All events will be held virtually and require pre-registration. For more information or questions, contact the LAII at laiioutreach@unm.edu.

Every year hundreds of thousands of migrants make their way along the trail running from southern Mexico to the US border. Gustavo’s gunshot wounds from Mexican police, which have achieved abundant press attention, might just earn him a ticket out of Nicaragua. Meanwhile anthropologist Jason painstakingly collects the trail’s remains, which have their own stories to tell. Fragmented stories from Hondurans crossing through southern Mexico assemble a vivid portrait of the thousands of immigrants who disappear along the trail. Border South reveals the immigrants’ resilience, ingenuity, and humor as it exposes a global migration system that renders human beings invisible in life as well as death.

The first of two Latinas to represent Texas in Congress, Veronica Escobar, and the only African-American woman to run for city council in Austin in 2018, Natasha Harper-Madison, lead a diverse group of progressive voices across Texas as they fight decades of institutional racism and policies of discrimination along the border. The battle over immigrant rights, land seizures to build the border wall, and the troubled racial history of the state form the backdrop to a film that explores how a place once known for its reactionary politics is becoming more liberal, more diverse — and more at risk for violent conflict. Join us for a dynamic live conversation about the current political climate and what's at stake this election season, with special guests Congresswoman Veronica Escobar and former Congressman Beto O'Rourke. The Director of The Pushback, Kevin Ford will join us in conversation and share exclusive clips from the new documentary before the film's release on TVOD.

In this presentation the fronteristxs collective will discuss their ongoing collaborative work in the abolition movement. They will talk about the historical violence of the US immigration system and its relationship to racism in the criminal justice system. The fronteristxs collective is currently working with several coalitions on 1) the #FreeThemAll campaign to demand immediate release of individuals from jails, prisons, and detention centers 2) the campaign to divest NMERB funds from private prisons 3) and a legislative ban on private prisons in New Mexico. The collective will shed light on the ways that those in power work to silence individuals and give insight on how you can get involved in the campaign to #FreeThemAll.

Join us for a free screening and talkback of “Las Madres de Berks” short documentary created by artist Michelle Angela Ortiz. “Las Madres de Berks” documentary shares the testimonials of four mothers that were detained for two years with their children at The Berks County Residential Center, a family prison in Pennsylvania. Berks is the oldest of the three permanent family prisons for immigrant families in the country. Despite being held up as a “model” by proponents of immigrant detention, the center has amassed a record of human rights violations.

Award-winning visual artist, Michelle Angela Ortiz created the “Las Madres de Berks” Documentary, as part of her "Familias Separadas" public art project which amplifies the stories of families affected by detention and deportation in the United States. Ortiz’s main community partner, the Shut Down Berks Coalition has been fighting to close down the Berks family prison for years.

Justicia For the Children Screening and Discussion with Filmmakers

Frontera elders speak and demand justice for children who have been detained, separated from their families and who have gone missing in the borderland of El Paso Texas and Ciudad Juarez Chihuahua Mexico. Ya Basta! Join us for a discussion with filmmakers, community members, and the musical artist behind "Justicia For the Children."