The University of New Mexico has held ranks of being an LGBTQ-Friendly University, however, those rankings did not appear overnight. Much of the inclusivity and progress the University has made is the result of a decade of hard work by the LGBTQ Resource Center.

First opening its doors in August of 2010, the LGBTQ Resource Center is now on its decennial anniversary and is celebrating the tremendous amount of progress that has been made.

The resource center began as a student-led initiative with Jeffery Waldo, David Griffith and Adam Quintero taking the lead. As student leaders in the Queer Straight Alliance—a student organization which at the time was made up with almost 50 undergraduate members—the trio made it a mission to bring a safe space onto campus for the LGBTQ+ community. 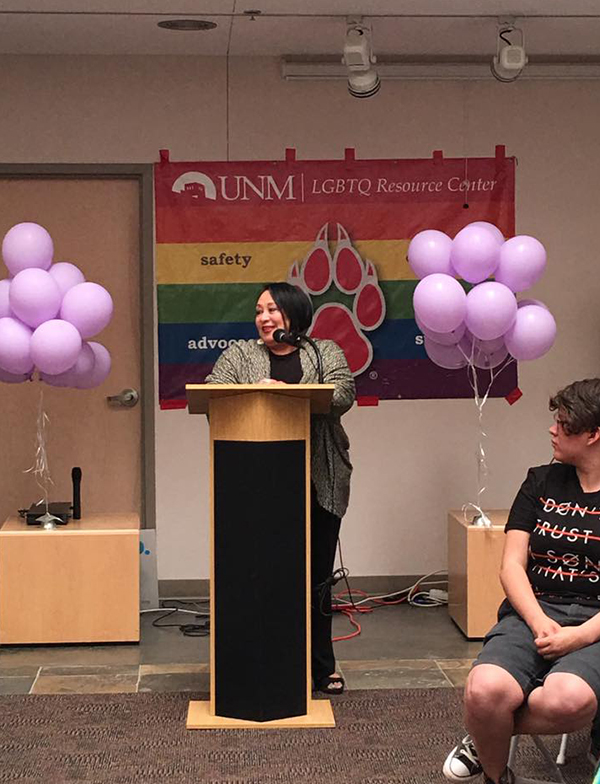 “Providing a space where students can be comfortable with themselves without fear of judgment or discrimination is something that is necessary for UNM students, especially incoming freshmen and sophomores,” explained Adam Quintero, QSA Chair, in 2010. “Many of them come from small New Mexico communities or homes where it is unacceptable to be gay, so it offers many of the opportunity to be open about your sexuality for the first time in their lives.”

The students teamed up with the former Vice President for Equity and Inclusion Josephine De Leon to make this dream a reality. The Center eventually opened in August 2010.

While the LGBTQ Resource Center has changed over the years, one thing has remained the same—Frankie Flores. Flores joined the staff in the spring semester of 2011 as a program aide and made their way through the ranks. Flores—lovingly known to their students as Mama Frankie—now oversees the department.

Flores recalls the good, the bad and the ugly. When the center first opened up, it had only a couple of thousand dollars to its name and nine employees working out of one office space. However, that did not matter; the staff was just happy to be able to give LGBTQ students a safe-haven on campus.

Early on, the Center focused on the harsh realities that members of the LGBTQ community had to deal with including food insecurity, homelessness, mental health and access to health care. Flores explained that the students who utilize the LGBTQ Resource Center often face day to day crises that put them in life or death situations.

“We were crucial in changing culture across campus on how do we show up for students in ways that are beyond academia,” observed Flores. “Other ethnic centers and resource centers do that, but you don’t get kicked out of your house for your race or for being a woman necessarily. At the time, the University had little to no resources for students who were dealing with these crises.”

Flores prides the department on always having food available for students since the day the LGBTQ Resource Center opened its doors—even if it was just a peanut butter and jelly sandwich. Often, staff members would give money out of their own pockets to provide funding for groceries and housing.

There were multiple instances that Flores recalls where the LGBTQ Resource Center had administered life-saving intervention in students’ lives. Now, these students are living very successful lives.

In addition to health resources, the LGBTQ Resource Center even offers free and anonymous HIV testing through the New Mexico Department of Health on the second and fourth Tuesday of every month.

“Every year we do rainbow graduation honoring our LGBTQ students and allies who have completed their degrees,” explains Flores.

Rainbow Graduation is unique in the sense that it is not just open to current graduates, but it is also open to Alum who have transitioned and were not able to cross the stage as their true selves.

“We actually to honor our alum, especially alum who have transitioned. They can participate in a ceremony as they want to represent themselves,” beams Flores. “We have had a number of trans individuals come in and say thank you for letting me graduate as myself.” 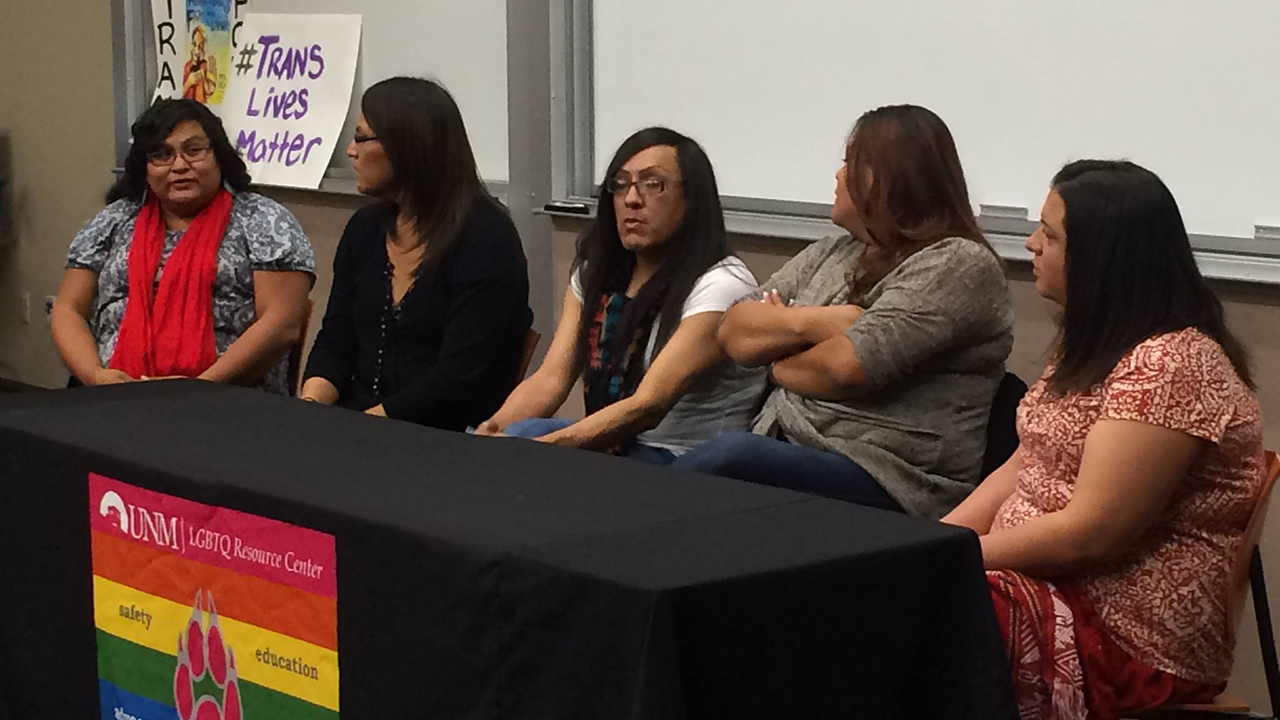 Members of the UNM LGBTQ community in a show of support of Trans Lives Matter.

Universal Restroom Initiative
The Universal Restroom Initiative began early on in the Center’s history when several students came to the Center and expressed concern that there was a lack of universal restrooms on campus. Universal restrooms are necessary for transgender or non-binary individuals because many do not feel comfortable or safe in gendered restrooms, even if their right to do so is legally protected.

“When the Center started, we had a group of students come to us and told us that the way they would pick their classes were based on location to single-stall restrooms,” explains Flores. “We had students who would come in and tell us that they would not eat or drink anything until they got home because they were afraid to go to the bathroom.”

To combat this issue, the LGBTQ Resource Center, Accessibility Resource Center, the Office of Equal Opportunity and the UNM Policy Office worked to create UNM policy that would increase access to universal restrooms. With pushes from both the undergraduate and graduate student governments, the Universal Restroom Initiative was adopted by the UNM Board of Regents.

In 2016, Policy 3500: Universal Restroom Initiative was finally adopted. This policy states that any new restrooms or renovations to current restrooms must include a single, ADA accessible, non-gender restroom.

To prevent this issue from happening again, the LGBTQ Resource Center created a committee with the Office of Equal Opportunity, the Lobo Card Office, the Office of the Registrar, Informational Technologies and more. From there, the committee created three phases to create a community that was more welcoming to individuals who would prefer not to use their legal birth name to identify themselves.

“When we first unveiled it, that first semester, a couple hundred people changed their Lobo ID. So, we knew there was a huge need for it. We had the numbers to show that people were utilizing it.”

According to the numbers from UNM Information technologies, 546 people changed their name within the first year of this policy. Later in the Spring 2018 semester, students were able to request their diploma featured their preferred or affirmed name. In April of 2019, Phase III allowed Lobos to change their gender identity and set preferred pronouns on LoboWeb. This allowed future emails and letters from the University to address individuals with the pronouns they preferred. All three phases have been successfully implemented.

A part of these celebrations also includes revising the LGBTQ Resource Center’s mission statement and releasing a ten-year plan for the new decade.

“The center was created out of a need for survival,” reflects Flores. “I want to move our ten-year plan from how do we survive to how do we thrive as LGBTQ individuals in this country.”

The LGBTQ Resource Center will be releasing its 10-year plan at the next Rainbow Graduation.