University of New Mexico Professor Hugh Witemeyer died after a short illness on. Born June 10, 1939, Witemeyer died a little over a month short of his 83rd birthday on May 1, 2022.

He is survived his wife of 35 years, Barbara Ellen Watkins Witemeyer, his daughter, Hazen Allison Witemeyer, his brother Wayne (wife Hilda) and many nieces, nephews, and friends around the world.

Witemeyer joined the faculty in the English Department at UNM in 1973 and taught English for more than 40 years and undertook more than his share of service responsibilities volunteering for many special extraneous committees. He was awarded Fulbright professorships twice, 1984 and 1989, both to support his teaching at universities in Germany where he and his wife, Barbara, thoroughly enjoyed the experience of living and teaching. 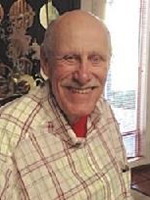 Witemeyer served as president of the AAUP twice; sat on the board choosing Rhodes Scholars, and other extracurricular jobs, which are not always viewed as 'real' volunteer work. He was often called upon to defend the sometimes-indefensible complainers against asserted academic injustice whether real or imagined. Always ready to help where needed, Witemeyer introduced a visiting lecturer at UNM for the D.H. Lawrence Ranch Initiative. For years he had been on the DHL board and promoted this important NM treasure in Taos. He also wrote nominations for Honorary Degrees as well as Marshall scholars.

He also led drives to have UNM grant authors Leslie Marmon Silko and Robert Creeley honorary Doctorate degrees, highlighting the outstanding achievements of two famous English department graduates. These are over and above the usual teaching load and he conscientiously filled every role asked often giving of his personal time. During his time at the institution, it was said Witemeyer was the "Moral Compass" of UNM.

His wider legacy includes major contributions to the world of English literary studies, the reputation of the English department at UNM and its faculty and students, and amateur dramatic performance in Albuquerque. Other achievements included fellowships from the American Council of Learned Societies (1971-1972) and the National Endowment of the Humanities (1977).

The gold standard for achievement as a literary critic is the single author monograph, and Witemeyer’s work passes this test with flying colors, to mix a metaphor. His first book The Poetry of Ezra Pound: Forms and Renewals (1969) reveals a fine literary critical intelligence at work on one of the most difficult and controversial American poets of the twentieth century. His second book, George Eliot and the Visual Arts (1979), Witemeyer once declared “came from his heart.” The volume demonstrated his critical abilities across artistic genres on the work of one of the greatest 19th century English novelists.

Another important task of the literary scholar is editorial. Hugh edited several volumes of letters and other writings by the poets Ezra Pound, William Carlos Williams, William Butler Yeats, and Charles Tomlinson.  He also published selections of the letters of Senator Bronson Cutting of New Mexico and the renowned publisher James Laughlin. Hugh published numerous critical articles in specialized scholarly periodicals including one in PMLA, a most prestigious venue.

If Witemeyer’s many talents were not sufficient, he also proved to be a very entertaining dramatist when two of his English colleagues celebrated their own retirements.  He created a parody of a James Bond film about the “kidnapping” of the apostrophe from the world of letters.  Accompanied by a self-dubbed audio pastiche of Bond music, the comedy, the parts played by English faculty members, proved vastly entertaining to a standing room only audience in the theater of the English department.

Another aspect of Witemeyer's rich life in New Mexico was his almost professional interest in Native American life, literature, and culture. Though widely knowledgeable and sympathetic, he would humbly say that he published nothing on the subject. Nevertheless, when it came time to assemble the speakers for his retirement symposium, in itself a departure from the usual academic practice, Witemeyer got Simon Ortiz, an outstanding Native American poet to contribute an outstanding contribution to the symposium from his own Native perspective.

After his retirement in 2004, Witemeyer threw his boundless energy into supporting local amateur theatre. In addition to playing roles in many local productions, he co-founded the Albuquerque Theatre Guild. This was an organization encompassing the over 50 groups that present dramatic performances at various venues around the Duke City. It became the go-to organization for amateur theatre in the city.

When memorization of dramatic texts became difficult, he turned his talents to singing in a choir and performing in a Radio Theatre (with scripts in hand). These groups went to various senior centers and residences to entertain elders. For these and other volunteer efforts, he was awarded the Andrus Award 2018 for “Exceptional Volunteer” from the New Mexico branch of the American Association of Retired Persons (AARP).

Witemeyer was very modest and self-effacing but always ready to put hours into producing the best result possible. Not a weekly stint at the local museum or senior center, perhaps, but considering the time and care he gave to many unsung tasks, his volunteer work over many years needed to be recognized. For Witemeyer, volunteerism was an important part of his life.

Before coming to New Mexico, Witemeyer earned degrees in English literature from the University of Michigan, Oxford University (while the holder of a prestigious Marshall Scholarship), and a doctorate from Princeton University. He also taught for several years at the University of California at Berkeley.

Witemeyer will be sorely missed, but his impact on students, colleagues, and numerous others will live on.

A celebration of Witemeyer's life will be held Saturday, June 11 at noon at the Witemeyer residence. His favorite charity was Doctors Without Borders.

** Special thank you to the Witemeyer family and UNM Professor James Thorson for their contributions.