He will leave for Bangkok, Thailand, in August and return in May 2016. He will be working with Chulalongkorn University.

Lumia will teach “Design for Manufacturability,” a course that he currently teaches at UNM. The course focuses on optimizing mechanical designs to minimize assembly time. For instance, Lumia said, finding a way to eliminate just one part of a product can yield great rewards in terms of time, reliability, and cost savings in its manufacture. A faculty member from Chulalongkorn University will attend the course, with the expectation that the professor can then teach the course to his or her students in the future. 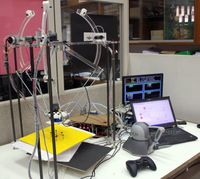 The research part of the effort will involve exploration into what are known as Delta robots, which are small robots that have motorized rack-and-pinion arms that perform much like a marionette and are used for the “pick and place” manufacturing, where a part is moved from one place to another at a rate of two units per second.

What Lumia would like to explore as part of the Fulbright award is the possibility of making the Delta robot assemble parts into a product. This could enable much more efficient manufacture of assembly-line type products, such as small electronics.

Lumia’s previous Fulbright was in Bangalore at the Indian Institute of Science, where he worked on a project to develop new microelectromechanical systems (MEMS) packaging techniques and applied this technology to microgrippers.

Lumia said he enjoys being part of the Fulbright program, which allows him to meet other researchers in drastically different fields. He said the three or four Fulbright scholars in Thailand will have at least one meeting together where they can discuss their work.

He said a key part of the Fulbright program is that Americans become ambassadors that share our culture and way of life in the host country.

“We serve as ambassadors for the U.S., to show other countries what the U.S. is about,” he said.

Lumia said this is evident in the instructions that he has received for teaching a course at Chulalongkorn.

“In the Mechanical Engineering department, we have a unique way of teaching senior design,” he said. “They don’t want me to change the way I teach it for their students. They want me to teach it in the ‘American style.’ A lot of students from this institution go on to graduate school in the U.S., and this helps them learn our way of thinking.”

In general, he said the students there tend to be afraid to make mistakes, which limits their potential, “and that’s not at all the way I teach. I encourage errors in the quest for learning.”

Lumia, who has been at UNM 20 years, is originally from Long Island, N.Y. He lived in Paris, France, in the late 1970s, and he and his family lived in Singapore for a year in the mid-1980s when he took a position at the National University of Singapore. He said he has a special affinity for the culture and people of Southeast Asia but enjoys learning from all peoples.

“I like to see how other people live, all the day-to-day routines,” he said. “You learn a great deal by watching other people.”