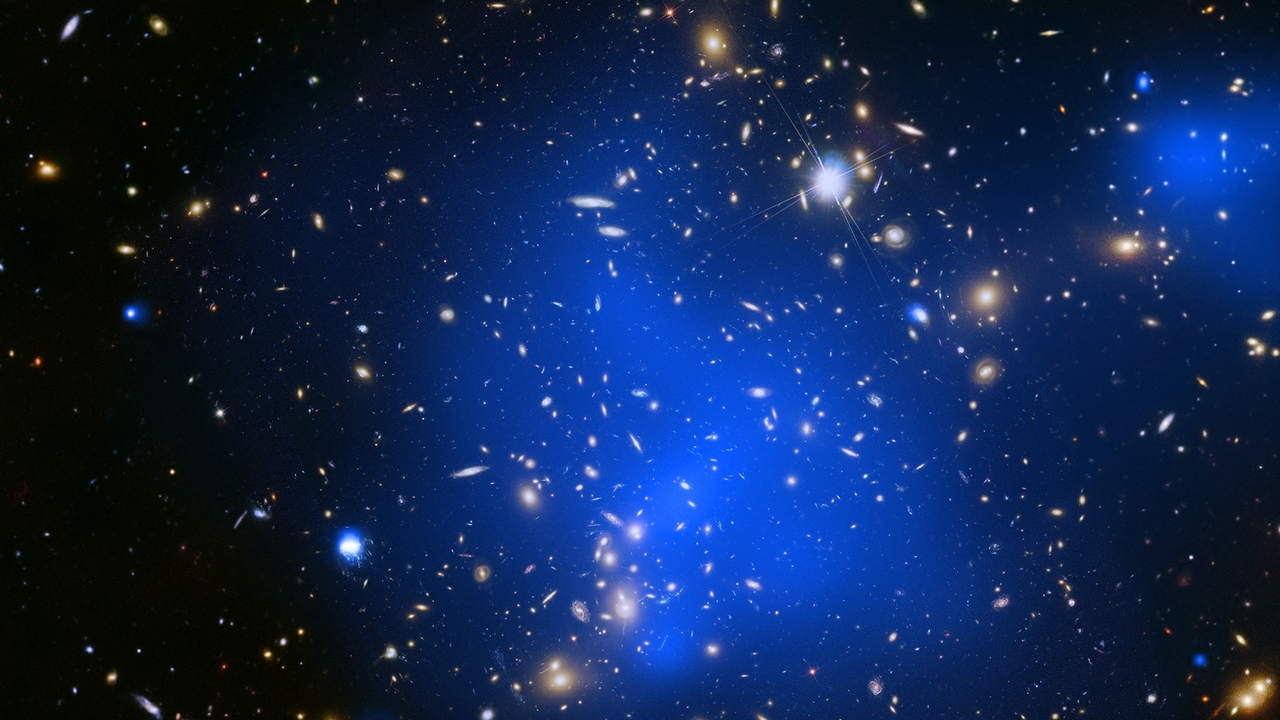 the largest objects in the universe held together by gravity. This image of the Abell 2744 galaxy cluster combines X-rays from Chandra (diffuse blue emission) with optical light data from Hubble (red, green, and blue). Image credit: NASA 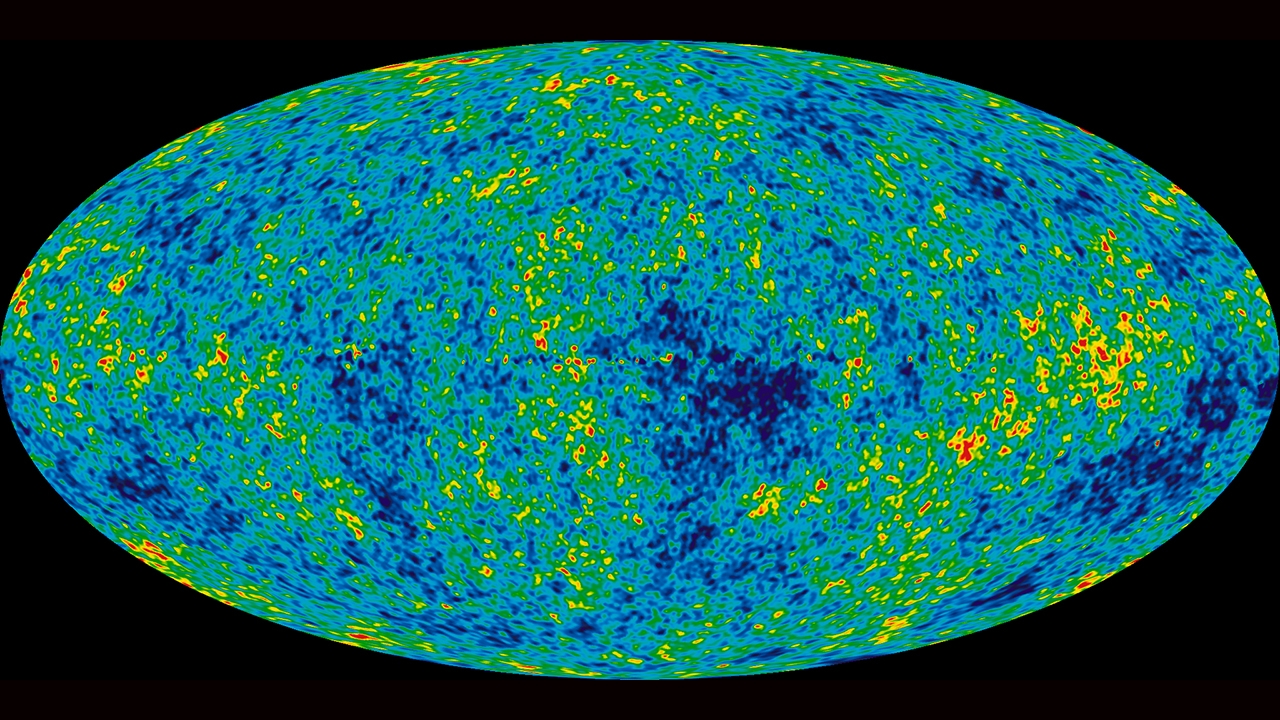 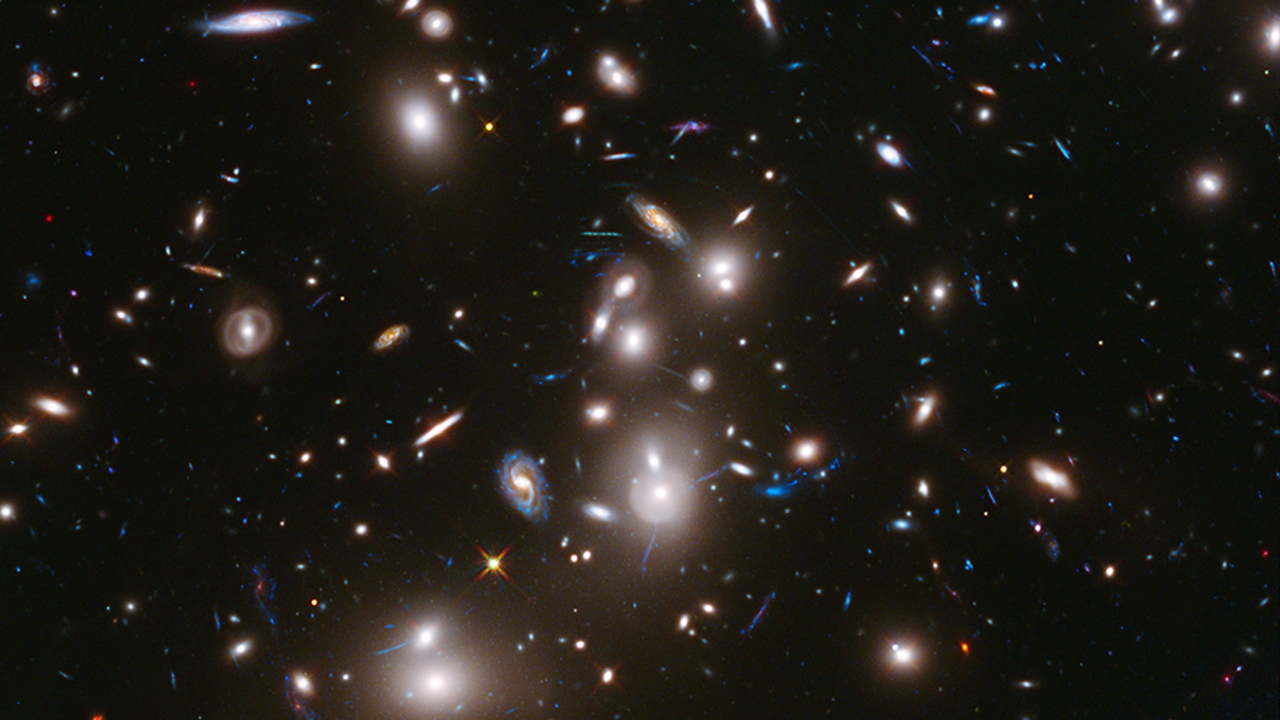 image of massive galaxy cluster Abell 2744, the deepest image ever made of any cluster of galaxies. Image credit: NASA

Cosmology is the study of the universe—how and when it began, how it moves and how fast, and how its forces interact with each other. It is the study of the balance between what we can’t see and what we can. Dr. Francis-Yan Cyr-Racine, assistant professor in the Department of Physics and Astronomy, has spent his career theorizing about the mysteries of the universe with complex and precise physics. His new grant from the National Science Foundation is no exception. “Cosmology at a crossroads: Towards a more complex Universe” aims to investigate and add to the knowledge base surrounding theories and numerous studies on the expansion of our universe.

For Cyr-Racine, the draw to theoretical physics was that it asks the big questions—to learn the fundamental building blocks of what makes reality work.

“It brings a sense of wonder that is inspiring,” he says. “It kind of puts our day-to-day problems in a different context.”

Cosmology is where scientists like Cyr-Racine and his graduate student Kylar Greene try to match astronomical observations, data, and measurements with the mathematical laws of physics. It seems simple at first—the theory of relativity, laws of gravity, and rules of particle physics dictate the actions of observable matter, so when running experiments and making observations, the data collected should match those theories. As an example: an apple falling from a tree branch to the ground confirms the laws of gravity. So, in theory, when we look at space through telescopes, the data we receive should match theoretical calculations and models. Unfortunately, however, they don’t always match.

“It brings a sense of wonder that is inspiring. It kind of puts our day-to-day problems in a different context.” — Assistant Professor Francis-Yan Cyr-Racine

Because there is a lot we can’t see, physicists are tasked with trying to explain the discrepancies through cosmological models. In general, these models describe the current universe and examine how it got to its present state, allowing researchers to make hypotheses about what we can’t see and predictions about the future evolution of the universe. One of the more well-known models is the Standard Model of Cosmology (also called the Lambda Cold Dark Matter model) which posits that the current universe began with a “big bang” and continues to expand with matter and energy uniformly distributed across the entire universe.

The problem is things can get weird in deep space. Looking into deep space also means looking back in time—we measure distances of galaxies from Earth as a function of how long it takes the light from those galaxies to reach our telescopes. While “dark matter” and “dark energy” are theoretical concepts meant to help physicists explain the motions of galaxies and the expansion of the universe, Cyr-Racine believes the standard model might be missing something fundamental to explain the speed of expansion and observed distances between galaxies. The “missing” something could be related to dark matter and dark energy, or neutrinos and antimatter, or something yet to be considered.

Cyr-Racine and Greene are not trying to reinvent the field of cosmology. Rather, they are collecting, examining, and reviewing data already published to add to the models currently accepted to explain these discrepancies between the standard models and observed distance measurements between galaxies. The discrepancies could be caused by a misinterpretation of current data, or be evidence that a change in the model is needed. Ultimately, they are trying to determine the fundamental laws governing the evolution of the universe.

“The cosmology community has created an impressive amount of literature debating how our Universe is expanding,” says Greene. The rate of expansion, or how fast the galaxies move away from each other, is key.

However, as technology becomes more advanced, observations of the universe become more detailed, such as the cosmic microwave background and views from the Hubble Space Telescope, and these observations don’t always match the theoretical models. The direct measurements of distances between galaxies often slows the inferred expansion rate, but Greene points out that these constraints are often neglected by theorists in favor of simply adjusting the rate itself to fit the model.

“With our current work, I hope to present this argument to the cosmology community so future studies will refocus on distance measurements rather than the expansion calculations,” says Greene. With Cyr-Racine, he has developed a tool that can interface with current modeling software to help better account for distance measurements when analyzing cosmological models.

“We want to make these tools available to the community, so that people can do the actual analysis, rather than using a derived quantity which may not actually tell you if your model is successful or not,” says Cyr-Racine.

Cosmology is rich in its complexity as it is linked to new discoveries not only in astronomy and astrophysics, but also particle physics. Experiments at laboratories such as CERN hold promise for that field, and when new breakthroughs happen in any of these fields, they will need to be incorporated into cosmological models and may change how we understand our universe.

“I will continue my research into the expansion of the Universe by developing models of the Universe that are inspired from particle physics,” says Greene. “Hopefully, these future models will help to end the debate of how quickly the Universe is expanding.”

Cyr-Racine recognizes how abstract and complicated these concepts can be, but says that this work, and cosmology overall, is part of answering some of the biggest questions of all: Where do we come from? Where do we go from here? Why is there something here rather than nothing?

“We’re tiny humans in a big cosmos, but we’ve been smart enough to understand a lot of it,” he says. “It’s amazing! It’s mind-blowing. It’s us, little humans, peering at the cosmos and trying to make sense of it.”