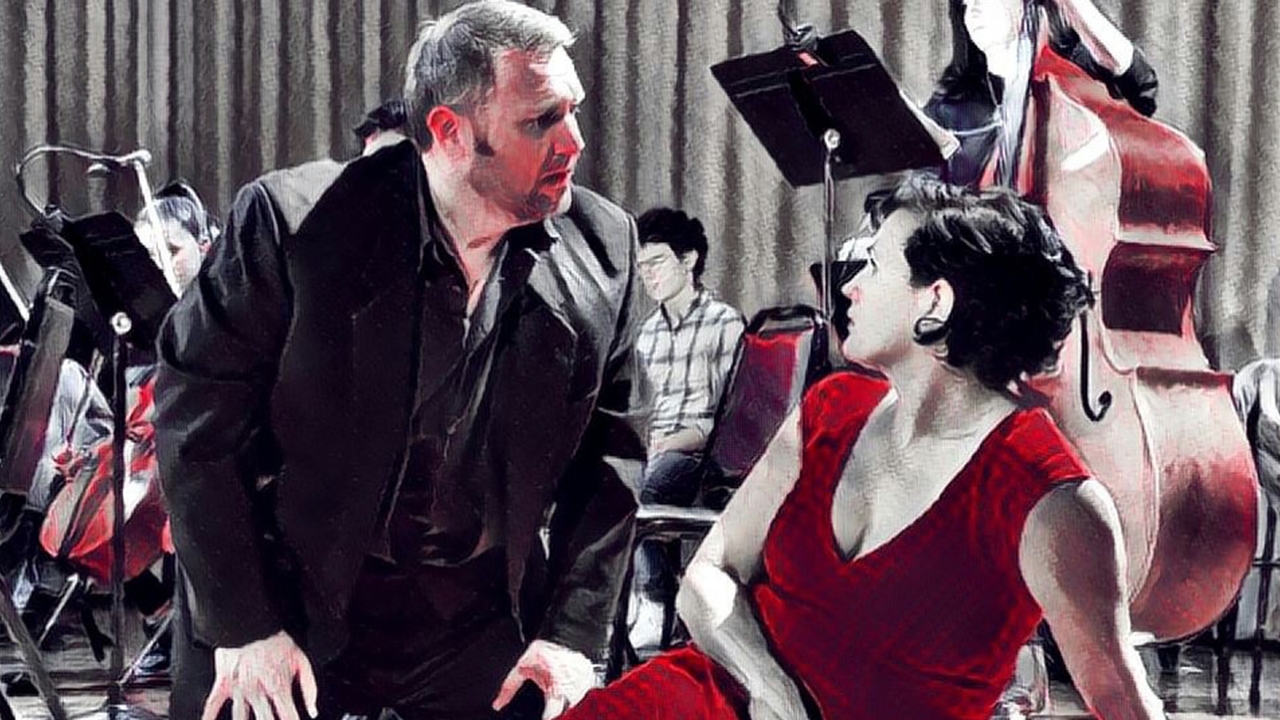 Professors Olga Perez Flora and James “Jamie” Flora are new faculty members in The University of New Mexico music department teaching and it’s no coincidence they share the same last name. They are a married and musical couple.

Olga is an assistant professor of Voice whose specialty is teaching applied voice lessons that include the classical and musical theater genres. She will direct a Spring opera production. Jamie is a lecturer II in Voice and Opera, teaching both classical and contemporary Voice, opera, Voice lessons to majors and opera theater performance ensemble.

“We met when we were both singers at Arizona Opera. We were friends and colleagues for years before our now 13-year relationship began. We have so much in common and we are both passionate about the voice so it’s never a dull moment in our home,” Olga explained, adding that the couple has two daughters, Ella, 4, and 8-year-old Lucia. “And they are the light of our lives!”

Music, the great New Mexico climate and a warm community attracted them to UNM.

“We’ve have several friends work for Santa Fe Opera and they all love the New Mexican climate and community,” Jamie said, noting that his friend Michael Hix, UNM associate professor and coordinator of Vocal Studies, “raved about both the UNM and Albuquerque communities. When a job came available, we were immediately interested in the opportunity to be a part of this wonderful community.”

Olga said she was initially intrigued by UNM’s great reputation for Voice, “but it was really when I came for my interview that I fell in love with the welcoming faculty and students. There was a moment in the afternoon where both students and faculty came to have coffee and chat with me and the energy was flowing and I knew I wanted to work here.”

The food was another major draw, Jamie admitted.

“I’m really excited to be here in New Mexico and to be a part of this incredibly rich and diverse culture. But I must admit that I’m most excited about New Mexican food. I love chiles and my answer to the famous question ‘Red or green?’ is ‘Christmas!’”

With a Doctorate in Musical Arts from The Ohio State University, mezzo-soprano Olga has been lauded for her “smoky tones” and “firm, pleasant voice and lively poise.” Flora has performed with opera companies and symphonies both across the country and internationally in productions that include deFalla’s El amor brujo, Madama Butterfly, Mozart’s Die Zauberflöte, Le nozze di Figaro and many more. She’s known for her sultry Carmen, and has performed this signature role numerous times, including with her husband.

Jamie, a tenor, is hailed for his “resonant, impeccably-trained voice and fearlessness to his singing” and has received acclaim in repertoire ranging from Verdi and Wagner to works by Carlisle Floyd and Daron Hagen. He has performed leading roles in La Traviata, The Magic Flute, Madama Butterfly and La Bohème. He has sung at the Metropolitan Opera House in New York in the chorus in Die Meistersinger von Nürnberg and Fidelio and with the Pittsburgh Symphony, Reno Philharmonic, Erie Chamber Orchestra and Buffalo Philharmonic, and recently debuted with the La Voz Humana: Lenguajes Múltiples festival in Cuba. Jamie holds voice degrees from The Ohio State University in Vocal Performance and Florida State University, where he received his Master’s of Music in Vocal Performance.

Olga recalled watching one of Jamie’s performances and a celebrity encounter: “I went to see Jamie in Attila with Washington Concert Opera… We have sung for some celebrities like Martha Stewart and Richard Gere and it was exciting to chat with them but at this particular opera, Supreme Court Justice Ruth Bader Ginsburg was in attendance and came to the opening night celebration. I could not speak! There was Jamie chatting away with her about politics and I could not form a coherent thought. I was star struck and that doesn’t really happen to me. It was a night I will never forget and the production was gorgeous.”

The two have performed together several times, including the lead roles in Carmen in 2019, roles they had both loved and had performed often but never together until then.

“Also that year, we got to go to Cuba which was incredibly special for us. Olga is 100 percent Cuban, but had never been to Cuba as her parents and their families fled Cuba due to Castro’s dictatorship and communism in the late 50s and early 60’s,” Jamie said. “It was wonderful to see her come face to face with her heritage. It was also hard to see Cuba in its current condition, ravaged by poverty due to the embargo and the see-sawing relationship with the US, Chinese, and Russian governments. While we were there we performed for the two greatest living Cuban composers: José María Vitier and Leo Brouwer, and Leo Brouwer was presented with the National Letter of Arts from the French Government by the Ambassador to Cuba from France. It was a wonderful experience.”

Olga added, “We love to perform together. Some of my favorites have been A Streetcar Named Desire, La Traviata, and the recital in Havana, Cuba last year but my favorite was Carmen. We have always wanted to perform it together and two years ago it happened. I just hope it happens again.”

The two also practice at home together.

“I’m loud and my voice is intense. Olga doesn’t always like practicing in our home together because of that intensity. It’s often better in a larger space,” Jamie admitted.

Olga added, “Actually, we are practicing right now for two virtual performing projects that we have going on. We practice together and apart. I like a quiet space in my office or piano room with a cup of tea but Jamie can practice with the kids screaming in the background… Venus and Mars and all that.”

Both the Floras agree teaching is a challenge right now.

“Since the act of singing is one of the most dangerous in terms of spreading droplets and aerosols, we have had to limit our face to face contact with our students more than other disciplines and even other instrument families,” Jamie noted. “This is hard because an integral part of what we do requires listening for overtones which most folks don’t know they’re hearing and microphones don’t pick them up in the same way that our ears do. It’s why music sounds so much more alive in person. The addition of a mask, when we do meet in person, only obscures the overtones even more. Finally, the voice is part of us, part of our bodies. It’s very personal. So, as a voice teacher who tells someone how to use their body and evaluates that use, it’s vital that we establish trust immediately. This is not possible in the same way via media. So there are many challenges in the current environment.”

“There are so many challenges in life for everyone right now,” Olga added. “The teaching part is a blessing. It’s the technology that is a challenge for me. As a mother who has two little girls ‘in school’ at home, I am working on balancing my students’ needs with my children’s needs. It’s a work in progress but we’ll get there.”

The Floras look forward to working with their students and watching them progress.

“I want my students to have command of their instrument and expression. I want them to perform fearlessly but vulnerably,” Jamie said. “It’s got to be fun. Almost everyone I know started doing music because they loved it so much. Sharing that joy and communicating these deep emotions is what it is all about. That’s how you move an audience with your sound.”

He continued, “As the son of music teachers, it is a joy to continue to pass down our art form. It’s wonderful to watch young people discover who they are because of their work with me in music. This self-discovery often leads to a path of making music for the rest of their lives, which is special because there aren’t many activities that we can do for our entire lives. It’s so rewarding to see former students performing or hear their stories from the opera world, Broadway, TV and especially in the classroom.”

“I hope that my students graduate with a whole knowledge of vocal technique, with a vision and goals for their future, and with a love of singing,” Olga mused. “It is my philosophy to teach my students and give them all of the resources so that they can be gainfully employed as musicians, artists, performers and educators. If they choose to leave music as a career, I hope they continue to support us and to be patrons of the arts.”