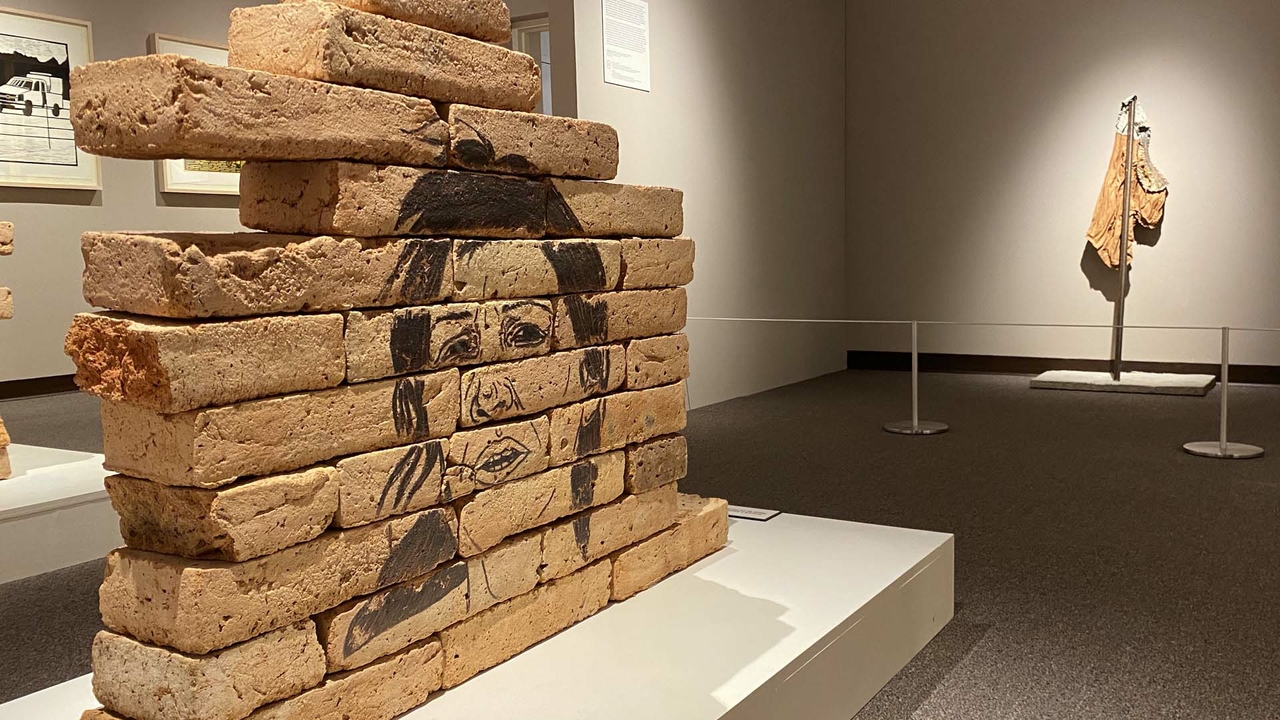 The Maxwell Museum of Anthropology at The University of New Mexico is partnering with the Wheelwright Museum of the American Indian in Santa Fe, which presents contemporary and iconic Native American art exhibitions, to present Indigenous Women: Border Matters opening Thursday, Oct. 19, at the Maxwell.

The exhibition features a timely look at four Indigenous women artists who speak to issues on both sides of the U.S. border. Their practice is guided by contemporary issues of identity, self-determination, human rights, and the impacts on the human experience. The works explore and question how Indigenous women interact with the land we inhabit. The layering of symbolism, meaning in the art, and deconstructing concepts including memory, cultural heritage, and politics, form the basis of the exhibition by artists Makaye Lewis (Tohono O'odham), Daisy Quezada Ureña (Mexican-American), M. Jenea Sanchez (Latinx), and Gabriela Muñoz (Latinx).

The Maxwell is really thrilled to partner with the Wheelwright Museum of the American Indian to take this provocative and timely loan exhibition, curated by their Chief Curator, Andrea Hanley (Navajo), said Devorah Romanek, Curator of Exhibits at the Maxwell.

Romanek said that before the COVID shutdown, the Maxwell was on the verge of installing Hostile Terrain 94, a participatory art project sponsored and organized by the Undocumented Migration Project (UMP), a non-profit research-art-education-media collective, directed by anthropologist Jason De León. The exhibition is composed of over 3,200 handwritten toe tags that represent migrants who have died trying to cross the Sonoran Desert of Arizona between the mid-1990s and 2019. These tags are geolocated on a wall map of the desert showing the exact locations where remains were found.

However, Romanek continued, the pandemic made the participation needed to get the Hostile Terrain 94exhibition together impossible at this time.

“At the same time, we still wanted to address issues at the southern border, when the Wheelwright approached the Maxwell about possibly taking this loan. It turned out to be a great solution to keep talking about the southern border, and all of the issues happening there, though this exhibition comes from a different angle than the Hostile Terrain 94 exhibition, because it specifically is looking at issues at the border of Indigenous and LatinX women.”

The exhibition delves into the violence and struggles women of color can have at the border, but also celebrates these women’s strength, nurturance and agency in this locale, a topic not often discussed. Of particular interest in an anthropology museum is the observation, made in the work of these women artists, of issues of identity, self-determination, human rights, the layering of symbolism, and the meaning of art, memory and landscape.

Makaye Lewis (Tohono O'odham) is a multi-disciplinary artist born in 1996. Lewis comes from the small, secluded village of Ventana on the Tohono O'odham Nation in Arizona. Her hometown has a population 49 and is located 60 miles from the Mexican border.

"As a Tohono O'odham citizen, my art stems from environmental influences and my culture. I come from a tribal nation on the border, and we never experienced removal from our traditional lands,” Lewis said. “I am comforted knowing that I am where I am meant to be. Still, I find discomfort in knowing the many issues that arise when an imaginary political line leaves half my reservation in the United States and half in Mexico."

Lewis says that her Tohono O'odham heritage and people inform her; her artwork is an extension of environmental influences and cultural narratives.

"My practice is a product of my exploration of creative processes and observational studies," she added. Lewis received her Associate of Fine Arts at Tohono O'odham Community College in 2017. She received her Bachelor of Fine Arts at the Institute of American Indian Arts in Santa Fe, in 2020. Lewis is a recipient of the Walt Disney Company Scholarship. The Institute of American Indian Arts highlighted her work in Visitors and Intruders and Thirteen in 2019; Small Mediums At Large and Día de Los Muertos: More than Sugar Skulls in 2018; and Art Rush in 2017.

Gabriela Muñoz's (Latinx) art practice is rooted in her experiences as a migrant living in Arizona, undocumented, for more than a decade. Living in the Southwest, her practice is concerned with movements of social justice and racial equality. Her installations, printed works, and collaborations function as a growing archive that documents the stories and histories of individuals from communities that are under-resourced and under-acknowledged. Her work champions women of color who build a place-based counter-narrative to mainstream culture that values power-sharing, peer-to-peer learning, and horizontal leadership models.

Her work has been exhibited at many places, including the Mexican Consulate in Arizona and at the U.S.-Mexico border fence. Muñoz holds a Bachelor of Arts in English literature and a Master of Fine Arts in Printmaking from Arizona State University.

M. Jenea Sanchez (Latinx) was born and raised in Douglas, Ariz./Agua Prieta, Sonora, Mexico. After receiving her Master of Fine Art from Arizona State University in 2011, she returned to Douglas to pursue her career as an artist and educator. She is a fellow of the National Association of Latino Arts and Cultures (NALAC) Leadership Institute, San Antonio, Texas, a 2020–2021 NALAC Catalyst for Change Award recipient, a 2019–2020 Mellon-Fronteridades Creative Scholar at the University of Arizona's Confluence Center, and a faculty member at Cochise College, Douglas, Ariz., in the Digital Media Arts Program.

Sanchez's work has also been shown at the U.S.-Mexico border fence. She and her husband are the co-founders of Border Arts Corridor (BAC), a 501(c)3 non-profit arts organization providing the borderlands community an immersive arts district through bi-national art walks, workshops, performances, public dialogues, and artist residencies located in Douglas, Arizona.

Daisy Quezada Ureña (Mexican-American) is a visual artist and educator based in Santa Fe. Within her practice, she creates ceramic works and installations that address identity and place in relation to social structures that cross between imposed borders. Quezada Ureña has worked alongside non-profit organizations like El Otro Lado/The Other Side, located in Southern California and Mexico, and Downtown Aurora Visual Arts, located in Colorado, which impact local communities by bringing art to youth. In 2016, she co-founded Present Cartographers, a collective invested in artists working within the immigration theme, and recently launched Terreno: Borderland Linguistics, a chapter book featuring work by national and international artists. She is a 2020 recipient of the United States Latinx Art Forum, Charla Fund grant. Quezada Ureña's work has been exhibited nationally at the Denver Art Museum in Colorado, and the Lightwell Gallery, University of Oklahoma; and internationally in Edinburgh, Scotland, Taiwan, South Korea and China. Quezada Ureña received her Master of Fine Arts at the University of Delaware with an emphasis in Ceramics. She is a faculty member in the Studio Arts Department at the Institute of American Indian Arts in Santa Fe.