A group from The University of New Mexico has received a grant from the National Science Foundation for a project that will develop a way to produce solar cells using nanotechnology, which could translate into more cost-effective solar panels for residences and businesses.

“The grant of nearly $1 million over four years will support the science and engineering group to make solar cells more efficient by trapping the sunlight more effectively than currently possible,” said Sang Eon Han, assistant professor of Chemical and Biological Engineering and the lead researcher of the project.

Making solar cells more efficient has been a hot topic of research for several years. Previous approaches have not been largely successful, but the UNM team says their approach relies upon different technology than what has been previously tried.

“The advantage of our approach is that it could make solar cells more cost-effective and easier to produce,” said Sang M. Han, Regents professor of Chemical and Biological Engineering. “There has been a rapid growth in the number of installed photovoltaic solar energy systems in recent years, and for the number to continue to increase, we must find ways to further reduce the cost of production. The challenge with our method is to ensure that it can make cells easier to produce, which has been a significant challenge in the past.” 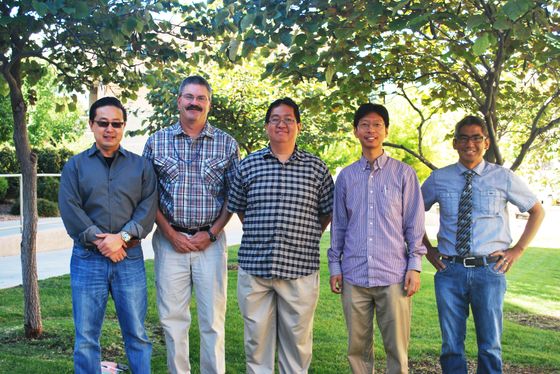 Sang Eon Han says their research is unique because it uses nanostructures of “controlled symmetry” in solar cells.

“Currently, solar cells are produced with randomly-shaped and macroscopically-sized corrugations to trap sunlight, and that works,” he said. “But our approach makes the cells more effective at trapping sunlight by using nanoscale corrugations with controlled symmetry.  We will develop manufacturing processes to integrate the nanoscale structures into solar cells.”

The effective light trapping could reduce the weight of solar cells. Reducing weight continues to be a challenge in solar cell production. Making solar cells lighter and easier to transport and install, could expand the use of solar in homes and businesses.

“Right now, 40 percent of commercial buildings cannot support solar panels because the roofs can’t support the weight of them,” said Sang Eon Han. “Crystalline silicon accounts for as much as 30 to 40 percent of a typical solar module cost. By using very thin substrates of this material, we will be able to reduce cost and also create lighter cells that are easier to transport and install.”

Team members on the project are Sang Eon Han; Sang M. Han; Steven Brueck, distinguished professor of Electrical and Computer Engineering Emeritus; Randall Schunk, a national laboratory professor in the UNM Department of Chemical and Biological Engineering; and Nick Flor, an associate professor in the Anderson School of Management.

Flor will be working with the engineering team to develop immersive interactive visualization of the scientific concepts in the project for use in middle and high schools to encourage students to become interested in science, technology, engineering, and math disciplines.

The project, “Scalable Surface Corrugation of Silicon Surfaces for Enhanced Light Trapping in Solar Cells,” is part of the Scalable Nanomanufacturing Award program though the NSF, which has the goal of translating the science of nanotechnology into products that directly benefit society.  The project began Sept. 1, 2016, and will continue through Aug. 31, 2020.