The New Mexico Technology Council has announced its 2021 Women in Technology honorees, including UNM Regent and Rainforest Innovations Board Chair, Sandra Begay.

The annual Women in Technology Awards recognizes outstanding women who represent STEM industries in New Mexico and show an exemplary commitment to mentorship and community impact. 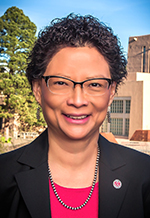 Be Bold, Be Brave, Be You! was the theme for this year’s Women in Technology Awards. The awards celebrated the ways this year’s honorees took risks and made bold decisions in their careers. Their contributions have made a difference and moved their industries forward.

It takes courage and stamina for women in tech to reach high levels of leadership. This year’s honorees not only created their own success, but they also actively mentored and supported other women in technology, helping young women reach for their dreams.

The New Mexico Technology Council is an association of professionals working together to promote the growth and success of New Mexico’s technology business sectors.

Begay works as a principal member of the technical staff at Sandia National Laboratories. She has mentored over 40 young Native Americans through the energy program she created at Sandia and the Department of Energy. Begay is a former Executive Director of the American Indian Science and Engineering Society (AISES), former chair of the AISES Board of Directors, and the recipient of the AISES Lifetime Achievement Award.

The mission of AISES is to substantially increase the representation of American Indians and Alaskan Natives in STEM studies and careers.

Begay was a founder of the UNM AISES Chapter as a student leader. In 2000, she was the recipient of the Stanford University 2000 Multicultural Alumni of the Year Award. She has also been selected as a recipient of the Governor's Award for Outstanding Women from the New Mexico Commission on the Status of Women.

Begay recently received the Alumni Circle Award from the National Action Council for Minorities in Engineering (NACME) for her lifetime contributions to the advancement of Native American students in science, technology, engineering, and math (STEM) education and careers.

Learn more about the Women in Technology Awards here.