Investigators at The University of New Mexico analyzed the psychological functioning of healthy college students with varying levels of tetrahydrocannabinol (THC) in their urine. Compared to nonusers, young adults with recent exposure to cannabis scored significantly higher on standardized measurements of prosocial behaviors, empathy, and moral decision-making founded on principles of ensuring harmlessness and sense of fairness.

In their recent study, titled “Cannabis Consumption and Prosociality” published in the journal, Scientific Reports, the UNM researchers showed that healthy young adults with recent cannabis exposure exhibited higher levels of prosocial behaviors and heightened sense of empathy than those who had not consumed cannabis recently. This is among the first studies to show psychosocial, non-clinical benefits of cannabis use among healthy young adults. 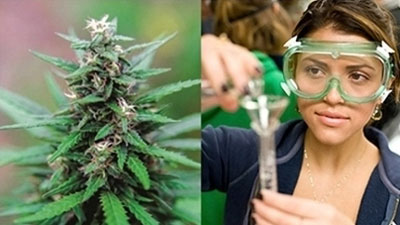 “Most investigations on the effects of using cannabis have focused on either negative consequences of cannabis addiction or on the physical health effects of cannabis use,” said lead investigator and Assistant Professor Jacob Miguel Vigil, UNM Department of Psychology. “Almost no formal scientific attention has been devoted to understanding other psychological and behavioral effects of consuming the plant, despite it being so widely used throughout human history.”

The recent research findings suggest that cannabis may cause a shift from more ego-centric self-concepts to a heightened sense of selflessness and responsibility to protect others from undo harm. Among men, cannabis users also scored higher on the “agreeableness” dimension of personality. Most of the observed differences in the prosociality measures between cannabis users and non-users were correlated with the duration of time since the participants last used cannabis suggesting the effects are transient.

“The transience of the effects supports that cannabis is triggering behavioral and perceptual changes rather than that cannabis users and non-user differ fundamentally in their baseline approaches to social interactions,” said co-author and Associate Professor Sarah Stith, UNM Department of Economics.

Cannabis users and non-users did not show differences in measurements of anger, hostility, trust of others, facial threat interpretation, the other four remaining dimensions of personality (extraversion, conscientiousness, emotional stability, and openness), or moral decision-making founded on principles of respecting authority and preserving the concept of purity.

“I am honored to be part of this groundbreaking research showing that cannabis may have significant societal benefits,” said co-author, Tiphanie Chanel, Psychology, UNM, “I hope that this work can help pave the road to more fully explore the effects of cannabis on human interactions and wellbeing.”

“I often refer to the Cannabis plant as a super medication, relative to most other conventional pharmaceutical products, because it is not only effective for treating the symptoms of a wide range of health conditions, quickly and relatively safely, but now we have concrete evidence that it may also help improve the average person’s psychosocial health," said Vigil. "Prosociality is essential to society’s overall cohesiveness and vitality, and therefore, cannabis’ effects on our interpersonal interactions may eventually prove to be even more important to societal wellbeing than its medicinal effects.”

This research study was supported in part by private donations to the University of New Mexico Medical Cannabis Research Fund (MCRF). Descriptions of similar research can be found on the MCRF’s YouTube educational channel, Cannabis Connection University.