Research scientists from universities across the state are making progress on some of the complex research needed to address obstacles related to energy independence.

Energize New Mexico was the largest National Science Foundation (NSF) grant in the state in 2014. Fifty institutions are involved in collaboration with the New Mexico Experimental Program to Stimulate Competitive Research (NM EPSCoR).

Natalie Willoughby, NMEPSCoR staff member said, “NM EPSCoR is working hard for the state of New Mexico. Not only is the Energize New Mexico grant building a self-sufficient, sustainable energy future for the state through research and education, it is also providing a culture of entrepreneurship and establishing strong STEM collaborations between community colleges, tribal colleges, and the big 3: UNM, NM Tech, and NMSU.

The five-year grant for “Energize New Mexico” was awarded in 2013. The grant focused on problems in specific areas of energy related research.

In bioalgal energy, a research group is searching for ways to use non-traditional organisms and non-potable water to scale the production of biofuels into a usable form. A team at New Mexico State University has completed installation of a pilot-scale demonstration project at the Las Cruces Wastewater Treatment Facility. Faculty and students at NMSU, the University of New Mexico and Eastern New Mexico University are involved in the research.

The geothermal team based at New Mexico Tech is working to locate and map natural geothermal systems to create a statewide database. They received training at a test site just south of Socorro, New Mexico, and have set up a graduate level course to provide a unique training opportunity for students.

In solar energy, team members from UNM and other institutions are exploring an approach that converts atmospheric CO2 to methanol and hydrogen fuel through solar driven water oxidation. The team wants to address three challenges: storing energy during periods of darkness, improved solar energy processes and transportable solar fuel alternatives such as methanol.

The Uranium Transport & Site Remediation group is working in northwestern New Mexico, where uranium mining was conducted for decades to understand how uranium molecules move in the environment. Field research on the Navajo Nation and at the Pueblo of Laguna is showing them how uranium concentration in water varies. The team also set dust traps to study uranium wind transport in the environment. 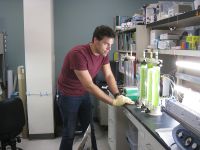 The team working on osmotic power development is focused on finding ways to productively use produced water – a byproduct of oil and gas drilling. The produced water has high concentrations of inorganic and organic matter in the form of total dissolved solids that make it unusable for agricultural purposes. The team would like to use produced water to generate clean energy through a pressure retarded osmosis system, and is working on a way to do that with a California company, Trevi Systems.

Another group called the Social & Natural Science Nexus component team is using system dynamic modeling to understand the behavior of complex systems that include water, the environment, energy and people. They are doing that at an experimental economics lab at UNM.

All six research groups plan to continue their work through 2018. Other ongoing research projects include a statewide network for informal science educators, research experiences for underrepresented undergraduate students and workshops for post docs and faculty.

UNM Professor is focused on fate of uranium in water