This week, New Mexico in Focus host Gene Grant sits down with Albuquerque Mayor Tim Keller to talk in-depth about priorities in year one of his administration, including a range of initiatives related to crime, economic development and community building.

Additionally, Gene Grant and the Line opinion panelists look at the role of labor unions in New Mexico, discuss how some children with disabilities wait years for available services, and debate whether the NM Supreme Court should disallow straight-party voting on the November ballot.

Hosted by Gene Grant, New Mexico in Focus takes a multi-layered look at social, political, economic health, education and arts issues and explores them in-depth, with a critical eye to give them context beyond the "news of the moment."

Funding for New Mexico in Focus is provided by the McCune Charitable Foundation, the Neeper Natural History Programming Fund for KNME TV, and viewers like You. 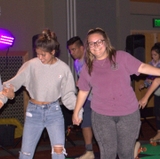