It’s a little tough to break ground in an old parking lot, but that is what the Innovate ABQ partners did to kickoff construction of the Lobo Rainforest Building. The nearly 160,000 square foot, six-story facility will be the Phase I Building at the seven-acre core site of Innovate ABQ at Broadway Blvd. and Central Ave. in downtown Albuquerque.

“We are planting the first ‘economic tree’ in our desert rainforest,” said Robert Frank, president of The University of New Mexico, who led the effort to create the site shortly after taking office in 2012. “This is the result of an idea – a seedling – that took root three and a half years ago, has been nurtured and cultivated by our partners, and will grow into a future harvest of innovation for our state.”

“It’s an exciting day” Laudick said. “There were many people in this community who didn’t think this was going to happen, but we just weren’t going to let that stand in our way. With the right partners and the right vision, helped by a strong working board, it has happened.” 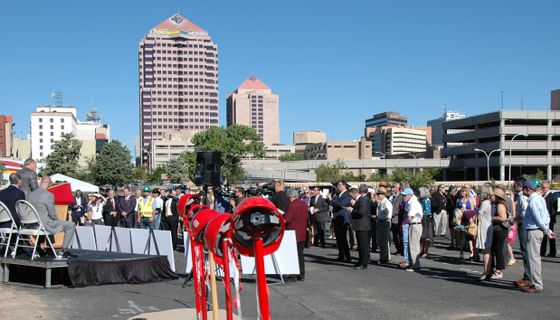 The Albuquerque skyline provides a beautiful backdrop for the Innovate ABQ groundbreaking ceremony.

A portion of the current structure will be razed to begin construction on the Lobo Rainforest Building, which is the first phase of a four-phase development plan. It will house STC.UNM and its incubator – the Cecchi VentureLab – as well as the UNM Innovation Academy for student entrepreneurial training.

"The Lobo Rainforest Building is an extraordinary opportunity and a catalyst for our city, higher education and downtown," said Mayor Richard Berry. "This project will help the revitalization of downtown Albuquerque by bringing UNM’s Innovation Academy and student housing to the InnovateABQ site."

The Innovate New Mexico program for statewide technology commercialization, an Air Force research lab, a Nusenda Credit Union Branch office, and a café will also be located on the first floor, while the second through the sixth floors will be devoted to student housing and a small fitness center. Each of the 155 apartments will have two bedrooms and two bathrooms available for upper-level undergraduate and graduate students.

“STC is thrilled to be co-located with the other tenants in the building.  Working with the Innovation Academy, UNM students will have a nurturing environment to test their ideas and start companies,” said Lisa Kuuttila, CEO and Chief Economic Development Officer, STC.UNM. 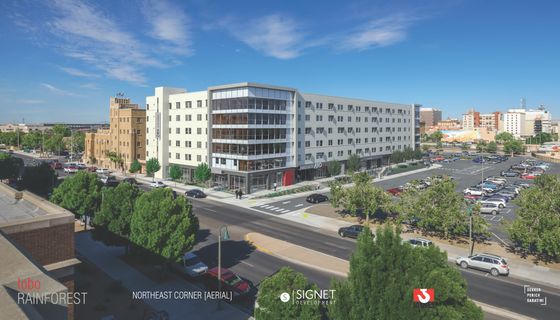 A rendering of an aerial view from the northeast corner of Innovate ABQ.

Future plans call for an incubation building that will serve the needs of researchers, inventors and entrepreneurs who want to start their own companies. Other proposed development includes renovation of parts of the existing church building on the site for office, community and event space; parking structures; retail space and pedestrian-friendly green space.

Money to purchase the property, which formerly housed the First Baptist Church, came from the Nusenda Credit Union, the City of Albuquerque, a grant from the U.S. Commerce Department Economic Development Administration through STC.UNM, Bernalillo County and the UNM Board of Regents.

Board members for Innovate ABQ include representatives from the City of Albuquerque, County of Bernalillo, UNM, CNM and local business leaders who guide development of the property. 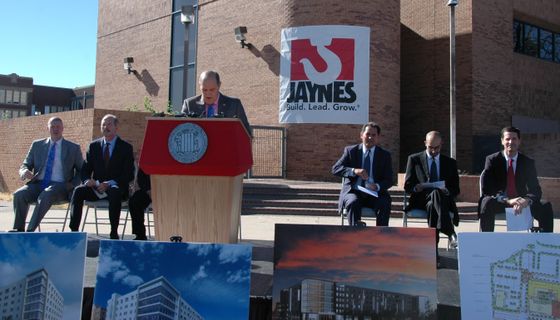