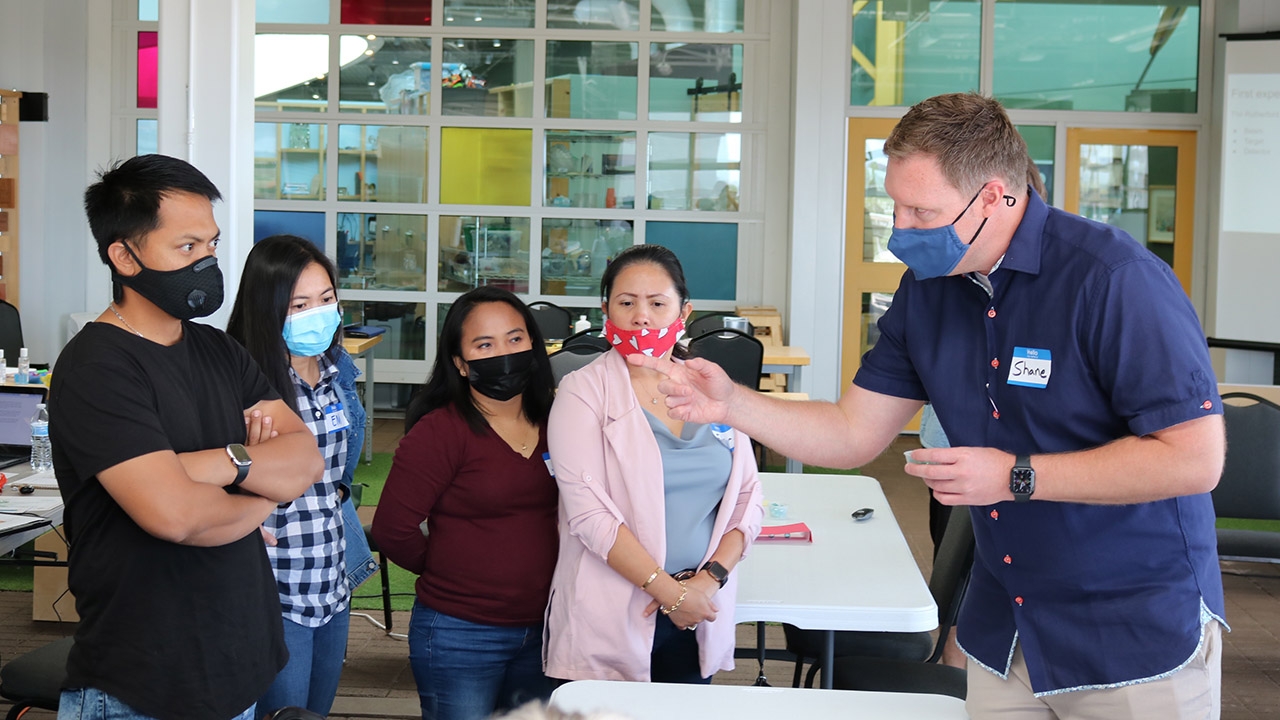 Shane Wood prepares to demonstrate Rolling with Rutherford where the probe and the target are a number of balls aligned in a row. The activity involves rolling another marble through the aligned area to collect data and use indirect measurements to determine a parameter. 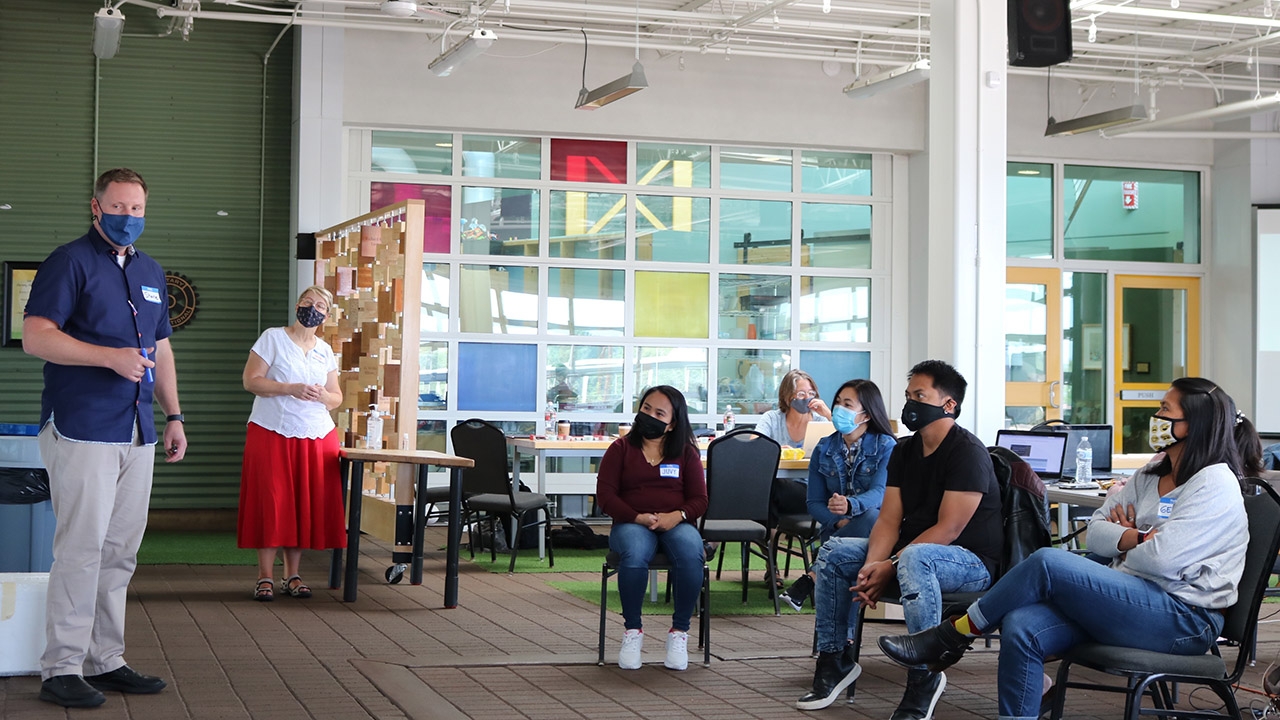 the QuarkNet workshop learn how to analyze data from the Rolling with Rutherford activity. 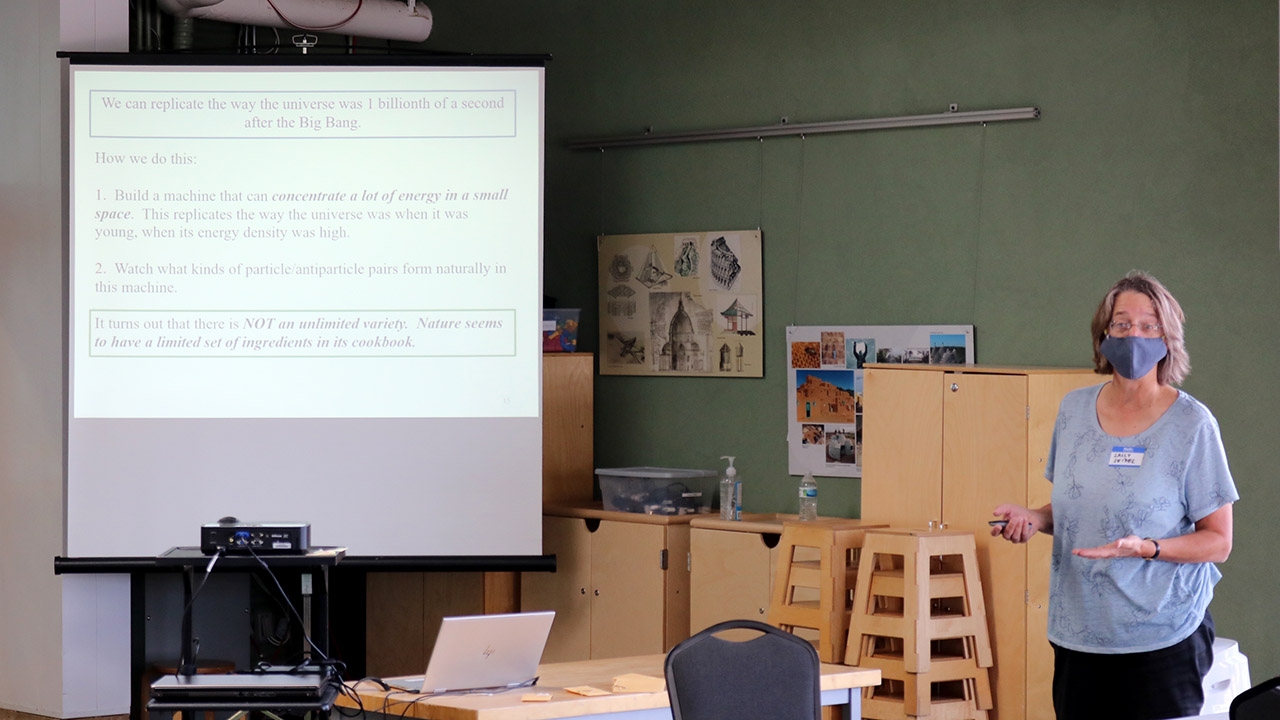 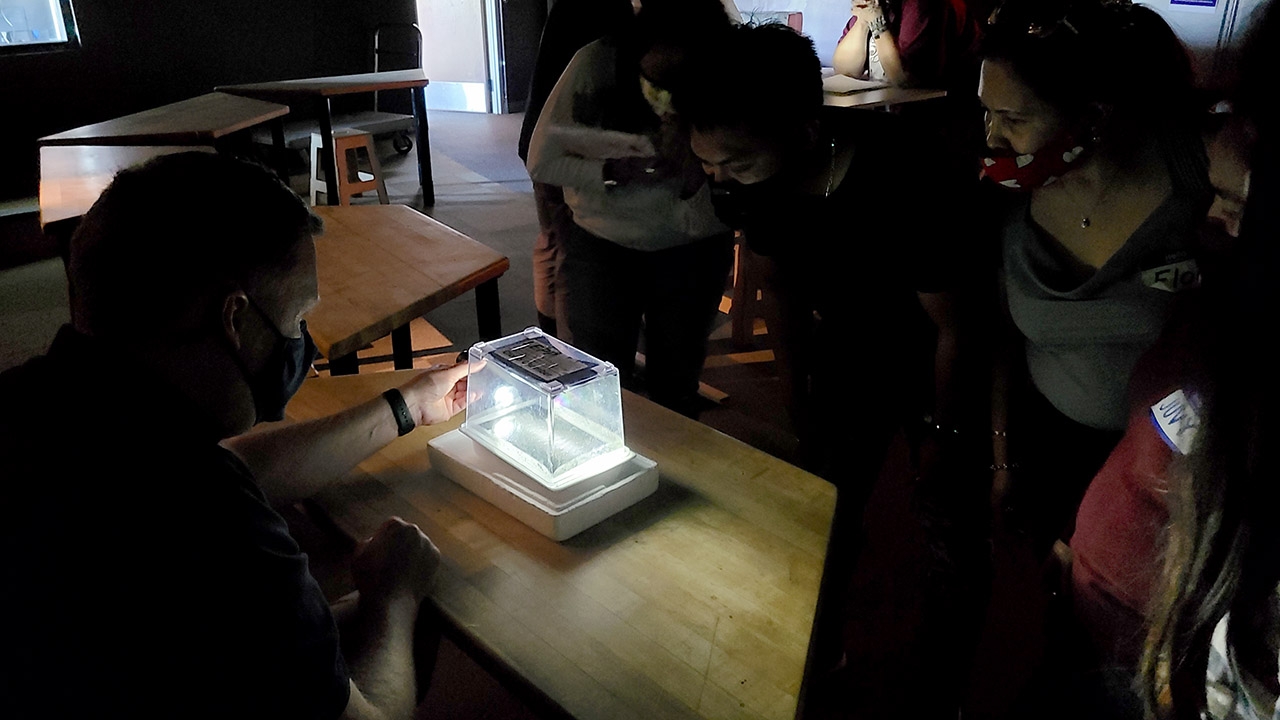 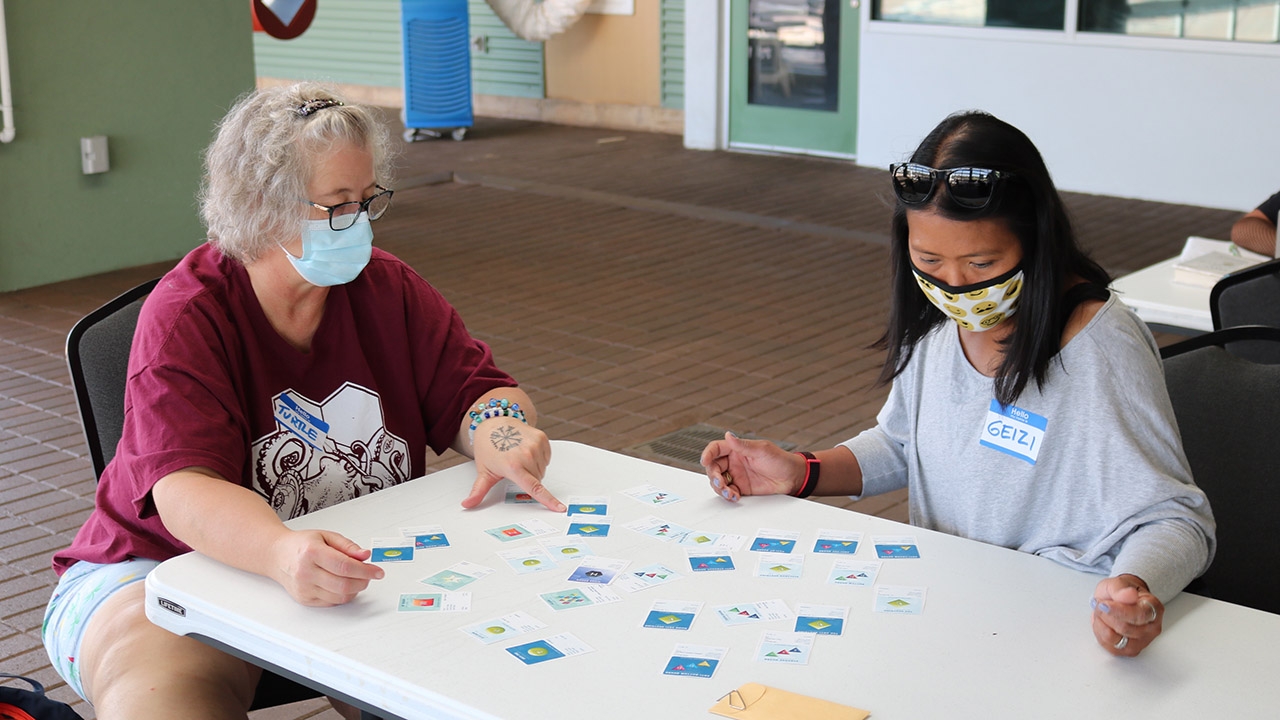 cards after shuffling a particle deck, an activity based on particle cards depicting the fundamental particles and their characteristics.

The role of science in our everyday world has maybe never been more important than during the past 18 months as a pandemic gripped the world. With that in mind, teaching the next generation of scientists is a critical mission and developing that interest in K-12 students is a key area to make important gains. It’s a mission the National Science Foundation (NSF) and The University of New Mexico take seriously.

QuarkNet, a nonprofit collaboration dedicated to developing America's technological workforce, is an NSF-funded partnership between Fermilab and the University of Notre Dame that provides science teachers the means to further develop their skills and bring real research experience into classrooms around the United States.

Through a nationwide network of QuarkNet Centers, including The University of New Mexico, NSF unites science teachers and university investigators in active research projects of contemporary physics with focused, hands-on workshops covering a variety of topics in physics. Teachers gain experience in real scientific research, maximizing their talents and classroom effectiveness; researchers gain educational impact from their research and engagement with their local communities; and students gain immersion in meaningful scientific research, preparing them for postsecondary education and developing critical intellectual skills.

At a recent workshop held in Albuquerque at the Explora Science Center & Childen’s Museum, QuarkNet corporate staff member Shane Wood led a group of teachers who journeyed from Grants, Durango, Ft. Wingate, Roswell, Laguna-Acoma School and several from Albuquerque including Public Academy of the Performing Arts, Desert Ridge Middle School and Escuela del Sol Montessori, through a series of activities and experiments designed to help teachers bring real-world research experience into their classrooms.

“Our mission is really to work with teachers who then in turn work with students. From that process, I think there are lots of potential gains that we see happening,” said Wood, who works through the University of Notre Dame where the NSF funds for QuarkNet get allocated. “We work on everything from finding our future particle physicists, who might not have known about it before they learned about it in their high school physics class, to just having an appreciation and an informed taxpayer.

“I think having students and therefore society, in general, have a better understanding of how science works really gets us a long way in having a more informed public. We really have several goals along those roads, but our main mission is working with the teachers to then bring 21st-century research experiences into the classroom.”

"The idea is to help the teachers be more aware and comfortable and interested in particle physics. We were happy to bring this workshop to all science, technology, and math teachers, and it's specifically because particle physics is not so well known." – Professor Sally Seidel, UNM Department of Physics and Astronomy

UNM’s QuarkNet program is directed by Professor Sally Seidel in the Department of Physics and Astronomy. Seidel’s research interests include particle physics instrumentation and high-energy collider physics. She is currently working on the Atlas Experiment in high energy physics at the Large Hadron Collider, the world’s largest and most powerful particle accelerator. Seidel has coordinated UNM’s QuarkNet activities since proposing a Center and becoming the 48th QuarkNet member in 2016.

The events at the recent QuarkNet workshop held at Explora included a presentation given by Seidel titled, “The beauty of particle physics,” a basic introduction to particle physics also known as high energy physics, which studies the very smallest building-blocks of nature. This particular field of science is a way to learn what the universe was like just seconds after it was born, billions of years before life existed to see it directly.

Other activities included shuffling the particle deck, an activity based on particle cards depicting the fundamental particles and their characteristics to become familiar with the Standard Model. Another fun activity was Rolling with Rutherford where the probe and the target are a number of balls aligned in a row. The activity involves rolling another marble through the aligned area. The data is then to calculate the diameter of the target balls to use indirect measurements to determine a parameter. Teachers also participated in a real-time experiment viewing particle tracks in a portable cloud chamber detector. The workshop also included a presentation on the LHC and what happens there.

“The idea is to help the teachers be more aware and comfortable and interested in particle physics. We were happy to bring this to all science, technology, and math teachers, and it's specifically because particle physics is not so well known,” said Seidel who likes to help people understand what technological consequences come from particle physics. “People like Shane and myself partner in community engagement events like this to get teachers involved and to build that science background to try and help people understand the scientific description of the world.”

Previous QuarkNet@UNM activities have included a guided, behind-the-scenes technical tour of the Very Large Array, a historical tour of the scientific heritage at Los Alamos as well as a high school workshop for students with a variety of presentations where the students got to be teachers themselves.

“It's excessively important. We come from a generation where there’s a lot of bias against women in science,” said Haste. “It took me a long time to find someone who would take me in no matter what and just bring me through. If I didn't have that mentor, I probably would have ended up being a secretary during that time period. But because I had someone who was like, ‘Hey, you know what? You get this, let's go.’ So I think that's really important to mentor young students.”