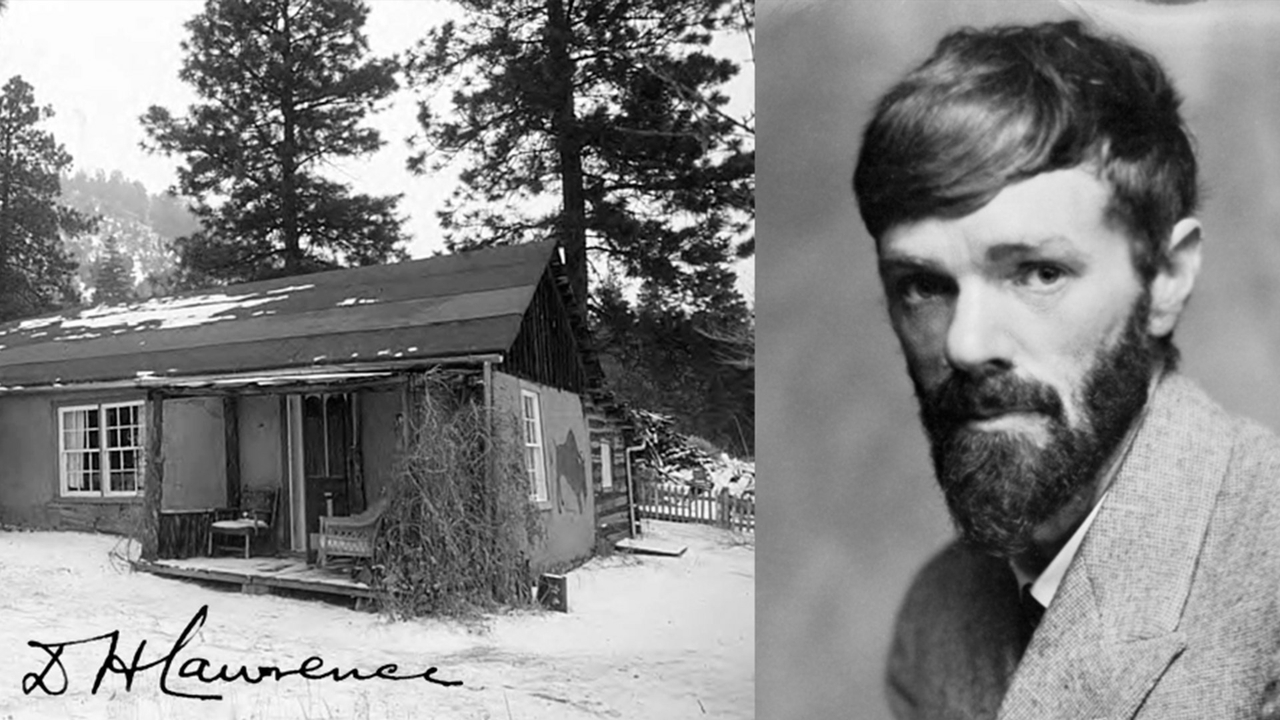 Lawrence centenary celebration to be held in Taos

One hundred years ago, the nomadic British writer D.H. Lawrence and his wife Frieda Lawrence, also a writer, accepted an invitation from socialite and arts patron Mabel Dodge Luhan to visit her in Taos, N.M. In September, the D. H. Lawrence Ranch Initiatives will sponsor a centenary celebration of the couple’s arrival in Taos.

Although the Lawrences had traveled in England, Germany, Italy, Ceylon, and France, neither had ever been to the United States. Luhan’s letter reached them in Sydney, Australia. The journey to San Francisco by ship took weeks. From the west coast, they boarded a train to Lamy, N.M., where Luhan and her husband Tony Luhan met them and carried them by car to Taos.

Their arrival coincided with D. H. Lawrence’s 37th birthday, Sept. 11, 1922. The visit would be life-changing for the couple. As the celebrated writer famously put it, “New Mexico was the greatest experience from the outside world that I have ever had. It certainly changed me forever.”

“New Mexico was the greatest experience from the outside world that I have ever had. It certainly changed me forever.”

The property is now owned and maintained by The University of New Mexico, having been deeded to the university in 1955 by Frieda Lawrence Ravagli, explained Sharon Oard Warner, UNM Professor Emerita of English and co-chair for D. H. Lawrence Ranch Initiatives. In the resolution of the Board of Regents, the University resolved "to use the property for educational, cultural, charitable and recreational purposes" as Frieda instructed in her will.

Friday, Sept. 16, at 7 p.m.  ̶  A 1969 documentary by Canadian videographer Peter Davis will be shown in the auditorium at the Harwood Museum. The 43-minute film, D. H. Lawrence in Taos, features Lawrence’s contemporaries and early biographers in conversation about the author’s life and legacy in New Mexico.  The event is free and open to the public.

Saturday, Sept. 17, at 11 a.m.  ̶  Supporters of the D. H. Lawrence Ranch will be hosted at a Poets’ Brunch fund-raiser at the Taos Country Club. Guests will be treated to a delicious brunch, prepared by the chef at the Taos Country Club. Poems will be performed tableside by participating poets Stephen Benz, Joshua K. Concha, Max Early, Veronica Golos, Catherine Strisik, and Diane Thiel. Cost is $40 per person and reservations are required. Email samcallister@unm.edu for more information.

Saturday, Sept. 17, at 2 p.m. in the Harwood Museum auditorium  ̶  Audra Bellmore, associate professor of Museum Studies at UNM and curator of the John Gaw Meem Archives of Southwestern Architecture, and architect Shawn Evans will present Frieda Lost and Found: Uncovering Treasures at the D. H. Lawrence Ranch. Charles McKinley’s painting of Frieda will be on display all weekend at the Harwood. Admission is free, but space is limited. Reserve tickets at the Harwood Events Calendar. 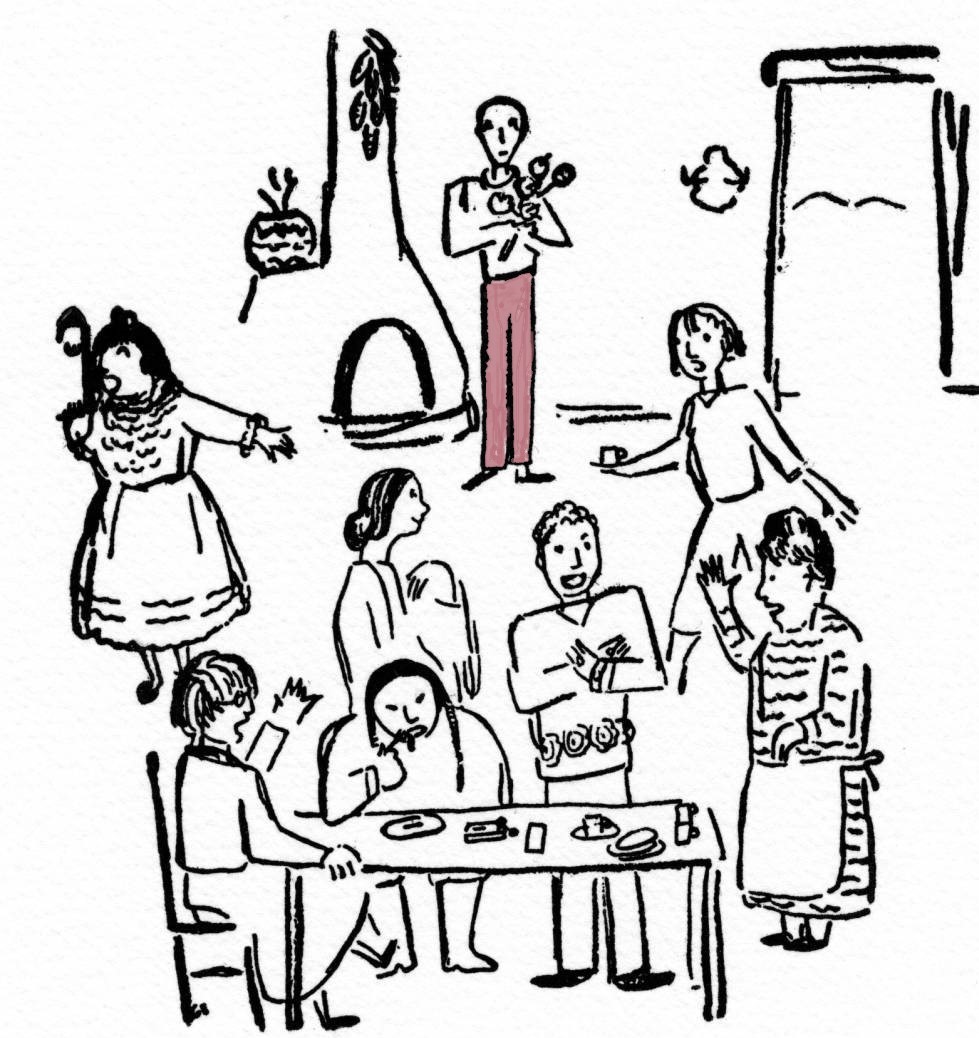 The sun is overhead, and the earth is underfoot. We live between the two. The original woodcut was made by American artist, Gina Knee and reflects the characters in Lawrence's play.

Saturday, Sept. 17, at 5 p.m. at the Taos Community Auditorium  ̶  Professor James Moran of the University of Nottingham will present D.H. Lawrence and Coterie Performance, followed by a staged reading of Lawrence’s unfinished play Altitude.  This event is sponsored by the New Mexico Humanities Council and is free and open to the public.

After the events to celebrate the 100th anniversary of the Lawrences’ arrival in Taos, guests are encouraged to hit the streets Friday and Saturday night to bask in the art installations of Paseo 2022.

In an essay to be published in the Santa Fe New Mexican this month, Warner explained how D.H. and Frieda Lawrence ended up in Taos.

“…Having read Lawrence’s travel book, Sea and Sardinia, Mabel [Dodge Lujan] decided the British author was the ‘only one who can really see this Taos country and the Indians, and who can describe it… between the covers of a book as it is in reality.’ Her letters of invitation chased the peripatetic writer around the globe—from Italy, to Ceylon, and on to Australia.

“Frieda and D. H. arrived on September 11, 1922, Lawrence’s 37th birthday. Like Mabel and [her third husband] Maurice, the Lawrences were transported by the beauty and mystery of New Mexico. In 1924, during their second visit, Mabel offered Frieda a ranch outside Taos, an enticement to keep them in the area. Lawrence christened the property Kiowa Ranch and went about making repairs. Despite his fragile health, the author added a fireplace and a porch to the Homesteader’s Cabin. He shored up the corral and tacked on a shelter for the black cow he named Susan.”

Even though D.H. Lawrence only spent a total of 15 months at the ranch, Frieda called it home for 26 years after her husband’s death. Both Lawrence and Frieda are buried at the ranch, just 100 yards from the cabin where they lived. Throughout their combined time at the ranch, they established a tradition of hospitality, especially to creative individuals. During their lifetime, the ranch’s guests included Aldous Huxley, W.H. Auden, Georgia O’Keeffe, Stephen Spender, Tennessee Williams, and Leonard Bernstein, among many others.

Frieda Lawrence bequeathed the property to UNM in 1955 and the D.H. Lawrence Ranch was added to the National Register of Historic Places in 2004. The site remains an area of interest for D.H. Lawrence enthusiasts as well as writers, historians, researchers and scholars worldwide.

The 10-acre Historic District is listed in the National Register of Historic Places and the N.M. State Cultural Register. The property is eligible for National Landmark status.

Alongside James Joyce and Virginia Woolf, D. H. Lawrence is widely regarded as one of the most important writers of the 20th century, Warner said, adding, “The ranch is the only property the Lawrences ever owned, and they cherished the place for both its beauty and its historical significance.”

The site lies along an ancient trading route of the Oklahoma-based Kiowa Indians, Warner said.

“The Kiowa Trail stretches some 120 miles and is considered sacred by members of the Taos Pueblo, who refer to it as the Red Clay Trail. Every August, Taos elders honor their ancestors with a horseback ride to the clay pit. Lawrence's name for the property, the Kiowa Ranch, is an homage to its historical significance,” she explained.

Fundamental to the mission of the D. H. Lawrence Ranch Initiatives is the preservation of the property and its historic buildings. The Ranch Initiatives program seeks to place the operation of the property on a firm financial basis and to restore and develop the site so that it can support significant educational, cultural, artistic, and research activities for students, faculty, as well as the New Mexican, national, and international communities.