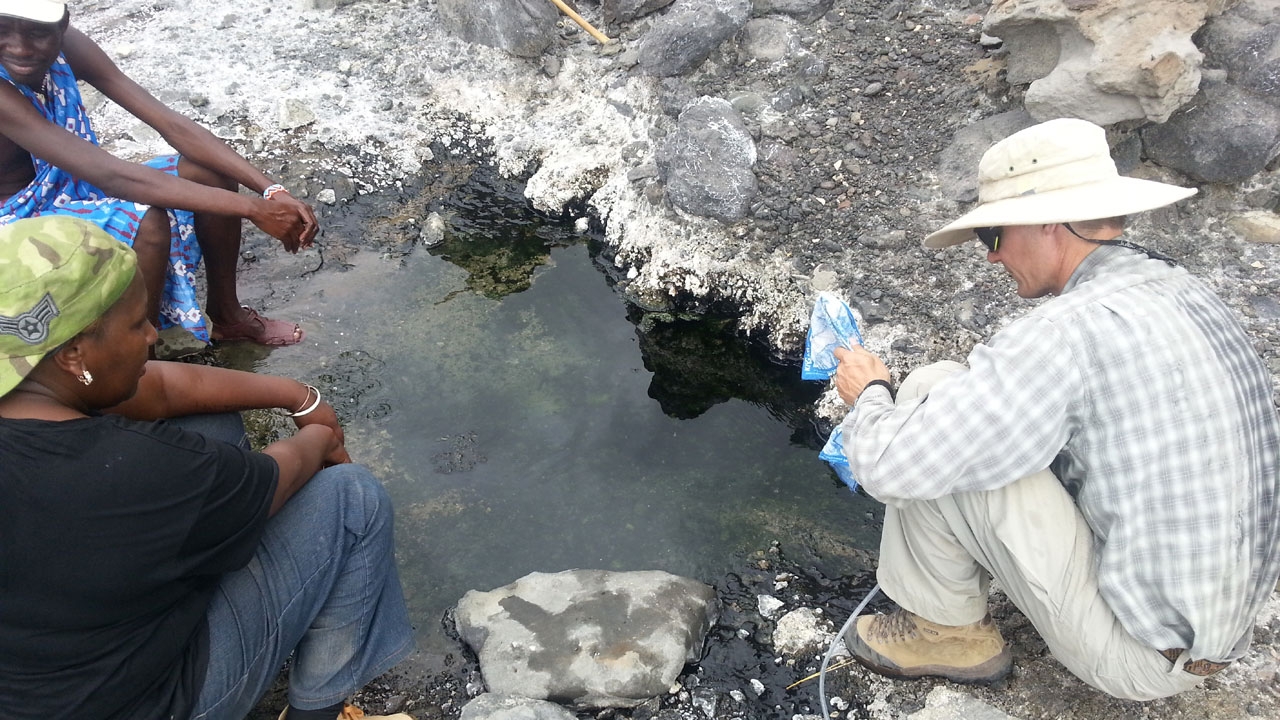 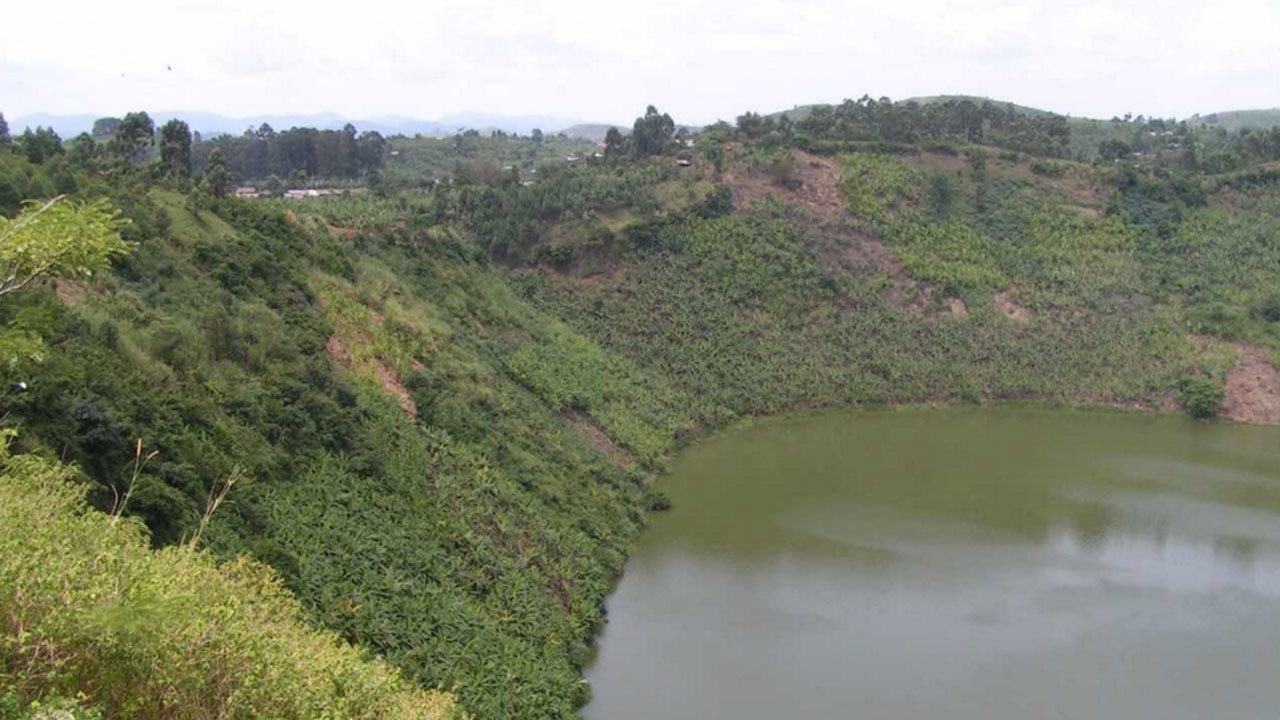 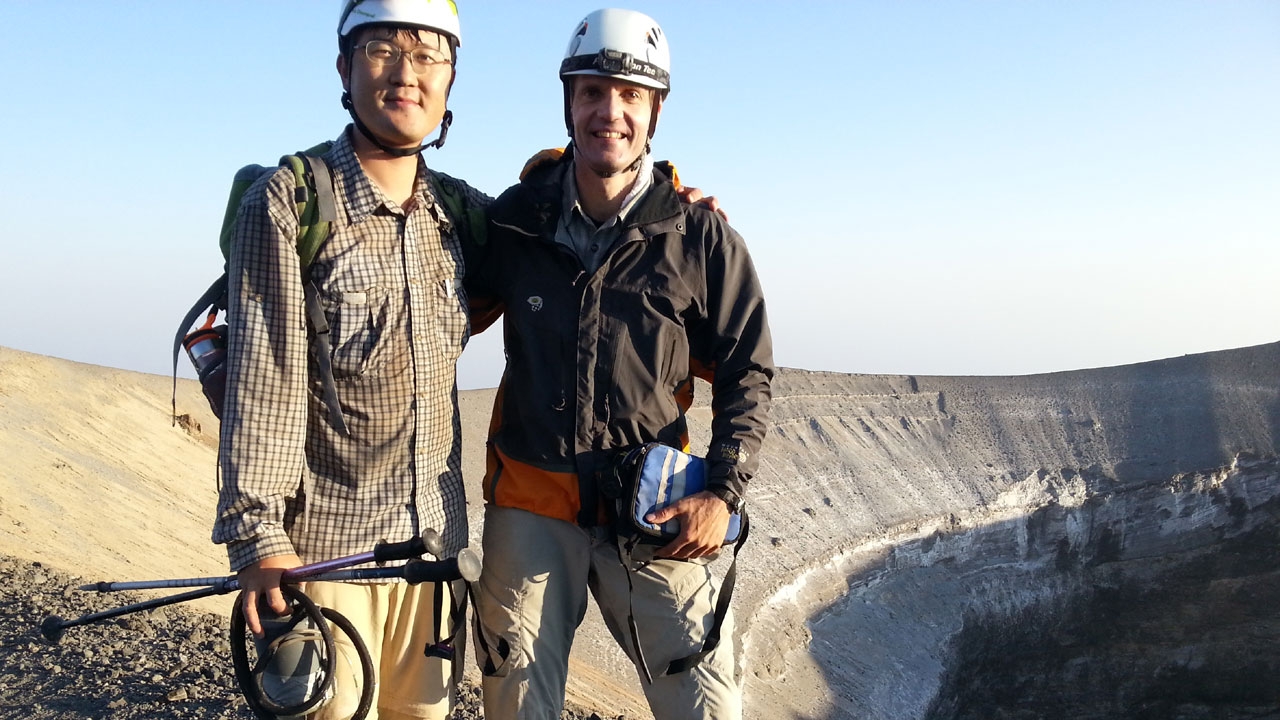 New research has identified that the storage of carbon dioxide (CO2) in the deep solid earth and its release into our atmosphere has a much greater role in shaping past climate variations than previously thought.

The research, published recently in Nature Geoscience, shows that continents are 100-150 times more important in releasing carbon into the atmosphere than previously thought. Essentially, it’s as much CO2 as released from the mid ocean ridges, and it also goes directly into the atmosphere from the volcanoes, not needing to find its way through the water, giving it a more immediate effect.

In this study, the researchers including Professor Tobias Fischer of The University of New Mexico’s Department of Earth and Planetary Sciences, and Professor Stephen Foley, from Macquarie University in Sydney, Australia, matched the measured release of CO2 in the East African Continental Rift with its complex, long-term accumulation in the continents.

“We have long recognized that volcanoes at active continental margins and at mid ocean ridges release carbon into the atmosphere, however, the role of carbon degassing from continental rifts, like the East African or the Rio Grande Rifts, have not yet been taken into consideration for the global carbon budget,” said Fischer. “This work shows that carbon from the Earth’s mantle can accumulate below the continents over geologic time scales and be the source of C release from the rifts.”

Current understanding on the shaping of our climate has mapped the role of the ocean crust in releasing CO2 into the atmosphere, because here the crust is thin and the CO2 can get through more easily than in the continents.

“Currently, we as humans are conducting an experiment by rapidly pumping about one hundred times more carbon into the atmosphere than all volcanoes combined. Based on what we know about the role of carbon dioxide in climate evolution, it is no surprise that this experiment should result in the rapid climate change that we are already experiencing today.”

In recent years, scientists have put more emphasis on studying the cycling of carbon deep in the solid Earth with a view to understanding the role of CO2 in the whole planet and not only in the atmosphere. The solid Earth has enormous reservoirs of carbon, which enters the atmosphere at volcanoes and along faults – huge cracks in the crust that are the sites of earthquakes.

“We know that CO2 is important in the atmosphere as a greenhouse gas, but there is much more in the solid Earth than in the atmosphere,” said Foley. “However, we don’t know much about how the two systems are linked, meaning at what rates how much of the CO2 within the Earth is released into the atmosphere, or by which mechanisms.”

Continental rifts are long, narrow fracture zones bound by faults along which continents eventually break apart in the plate tectonic process. These rifts have unusually high concentrations of carbonate-rich volcanic rocks and they are also the sites of massive degassing of CO2 along faults and at volcanoes – much higher than in other areas around the world. Despite this, attempts to budget carbon cycling through the inner Earth have not accounted for the role of continental rifts before now.

The key to the accumulation of CO2 in the continents is the depth of geological time: melts in the mantle formed over about three billion years have been sponged up at the bottom of the continents over that enormous time frame and released whenever rifts form. We know from high-pressure experiments that these melts contain large amounts of carbon. 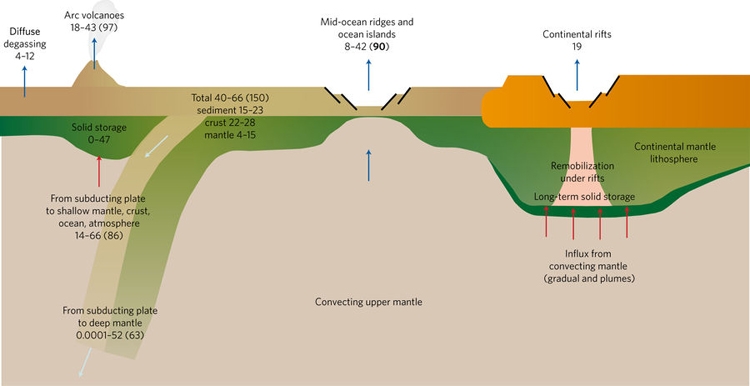 Arrows show fluxes in Mt C yr. Solid storage of C in the arc crust is inferred from imbalance between C release from subducted slab and arc volcanoes. Longer-term solid storage in continental mantle lithosphere is the result of redox freezing and episodic melt infiltration events. This provides a temporal filter due to gradual accumulation of solid carbon, followed later by its catastrophic release during continental rifting.

Continental rifts are usually active for about 40 million years (just one per cent of the age of the Earth). Professors Foley and Fischer calculate that the carbon collected in this way is enough to account for the release of around 75 million tons of CO2 every year for the entire 40 million year history of a continental rift. This research promises to ‘close’ the carbon cycle, improving the links the solid Earth and climate carbon cycles.

“We know from other work that a significant portion of the carbon that is stored in the ocean crust and subducts at the edges of continents is transferred into the deep mantle of the Earth,” said Fischer. “This work shows that this subducted carbon can over time accumulate below the continents and along with the carbon that is transported from the even deeper mantle by mantle plumes is eventually released back to the atmosphere by the rifting activity. So in essence, this realization helps close the deep carbon cycle.”

An intriguing consequence of the role of continental rifts in the carbon budget concerns times at which all continents have been collected together, such as Pangaea about 250 million years ago. Pangaea was a supercontinent that existed during the late-Paleozoic and early-Mesozoic eras. It assembled from earlier continental units approximately 335 million years ago, and it began to break apart about 175 million years ago.

“The life of these ‘supercontinents’ ends with them being broken up by an unusual abundance of continental rifts: at these significant times in Earth’s history, more than 600 million tons of CO2 per year may have been released, possibly directly contributing to warming of the atmosphere,” concluded Foley.

This work on the linking between solid Earth and atmosphere should eventually lead to a complete picture of the evolution of climate – an explanation of how the current climate came into being. Unlike our neighbor Venus, Earth, over the past billions of years, has maintained a temperature range that is quite hospitable for life.

“This is in part due to the slow cycling of carbon between the Earth surface and its interior,” said Fischer. “While carbon reservoirs in the Earth are huge, its transfer and emission to the surface and atmosphere occurs very slowly. This slowness allows the Earth system to adjust and sequester some of this carbon and therefore regulate the climate effect of the greenhouse gas.”

Of course, there were times in Earth’s history when the climate was warmer or colder than it is now and this may indicate that the carbon cycle was somewhat out of balance.

“Currently, we as humans are doing an experiment by rapidly pumping about one hundred times more carbon into the atmosphere than all volcanoes combined,” Fischer said. “Based on what we know about the role of carbon dioxide in climate evolution, it is no surprise that this experiment should result in the rapid climate change that we are already experiencing today.” 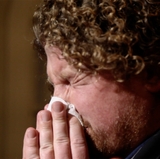