The nation’s largest national laboratory and New Mexico’s flagship university on Monday expanded their commitment to work together to help redefine the future of science and engineering for national security, partner on research and jointly recruit top researchers.

“With this MOU, Sandia and UNM commit to a deeper relationship to strengthen both organizations by exchanging personnel, developing innovative joint research programs and educating the next generation of national security leaders,” Hommert said.

UNM President Robert G. Frank said, “In research, as in real estate, location is key! Not many research universities have a national lab as their neighbor, but we do,” said “This agreement with Sandia Labs strengthens that close working partnership and pools our intellectual resources.”

The MOU aims to:

The MOU also makes UNM part of a larger academic alliance that Sandia has formed over the past year to bring together the Labs’ technical status as a Federally Funded Research and Development Center and the know-how of major national research universities. The alliance has three principal goals: solve big problems, sustain and engage human capital and accelerate technology commercialization.

“With this MOU, Sandia and UNM commit to a deeper relationship to strengthen both organizations by exchanging personnel, developing innovative joint research programs and educating the next generation of national security leaders."

About 2,400 UNM graduates work at Sandia, many in technical areas vital to national security. The MOU will encourage exchanges and integration of researchers, faculty and students, sharing of offices and facilities and an overall increased presence on each other’s campuses.

The two institutions have had a series of research pacts dating back to 1982. The new agreement supersedes an MOU signed by Sandia and UNM in 2011 that was set to expire next year. Sandia and UNM will build on their historic interactions and create more strategic relationship between the institutions, said Rob Leland, Sandia’s vice president for Science and Technology and Chief Technology Officer.

Abdallah added that the two national research institutions, UNM and SNL have always benefited from exchanging ideas and personnel, and have sought to complement each other’s strengths and expertise.

“As a recent example, the renewed national interest in the area of High Energy Density Science is one that both UNM and SNL are national leaders and the current agreement will further our collaboration and both of our missions in such critical areas," Abdallah said. 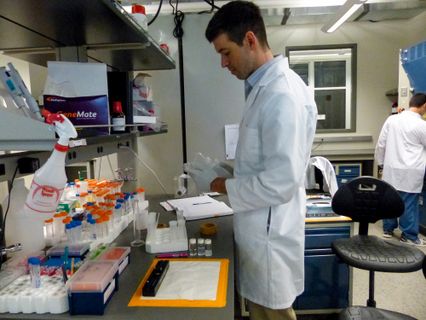 UNM Research Assistant Paul Durfee in the Center for Micro Engineering Materials works in Jeffrey Brinker's lab. Brinker's research work is an instrumental compnent in the Memo of Understanding signed between Sandia National Labs and the University of New Mexico.

In recent years, joint research involving UNM and Sandia led to the development of inorganic nanospheres that act as carriers for cancer-killing chemicals, collaborative work on quantum computing featured in several journals and other innovations across a broad spectrum of science and engineering fields. Overall, Sandia and UNM have undertaken more than 300 joint research projects since 1997.

They share the Advanced Materials Laboratory in UNM’s Science and Technology Park, which supports collaboration among Sandia, UNM and industry in materials research, development and transfer to private companies for commercialization. The 45,000-square-foot facility south of UNM’s main campus houses about 90 staff from the university, Sandia and private companies in a single, integrated research laboratory. Since it was established 13 years ago, research at the lab has produced 10 R&D 100 awards, the so-called “Oscars of Invention.”

Leland said the Advanced Materials Laboratory has grown into a model for the type of shared facilities that UNM and Sandia hope to establish and foster through the new MOU.

Sandia and UNM also work together through an Inter-Institutional Visitor Agreement, which allows direct collaborations without formal agreements or the need for UNM to use a project-specific research contract to have Sandia staff run experiments at the Labs.

Joint faculty appointments include Fernando Garzon, a recognized expert in materials science and engineering and the first professor recruited together by Sandia and UNM. Sandia researchers Jeff Brinker and Rick Kemp also work for UNM as professors through joint appointments, and Adkins/McIlroy said the MOU explicitly calls for more such hires.

Sandia has also formed academic alliances in the past year with the University of Illinois at Urbana-Champaign, Purdue University and the Georgia Institute of Technology. 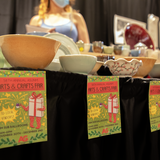