Edl Schamiloglu, Distinguished Professor of Electrical and Computer Engineering at the University of New Mexico, has been recognized with the 2015 IEEE Nuclear and Plasma Society’s Pulsed Power Science and Technology Committee’s Peter Haas Award in recognition of his contributions to the field of pulsed power.

The Peter Haas Award recognizes individuals whose efforts, over an extended period, have greatly benefited the pulsed power field through the development of important applications or areas of activity, including research, education, and information exchange. The award is given biennially, with presentation in odd-numbered years at the IEEE International Pulsed Power Conference awards banquet. This year’s conference will be held May 31-June 4 in Austin, Texas. 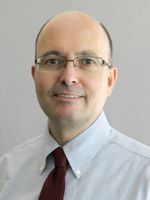 A fellow of the IEEE since 2002, he is a three-time recipient (2011, 2012, and 2013) of the UNM Science and Technology Corporation Creativity Award, the 2013 IEEE Nuclear and Plasma Sciences Society’s Richard F. Shea Distinguished Member Award, and the 2014 IEC (International Electrotechnical Commission) 1906 Award Recognizing an Expert’s Exceptional Current Achievements.

Promoted to Distinguished Professor in 2014, Schamiloglu's sponsored research includes projects with the Air Force Office of Scientific Research, Sandia National Laboratories, the Office of Naval Research and industry. He is principal investigator of a recently awarded six-year, $6 million grant for the AFRL/AFOSR Center of Excellence on the Science of Electronics in Extreme Electromagnetic Environments.