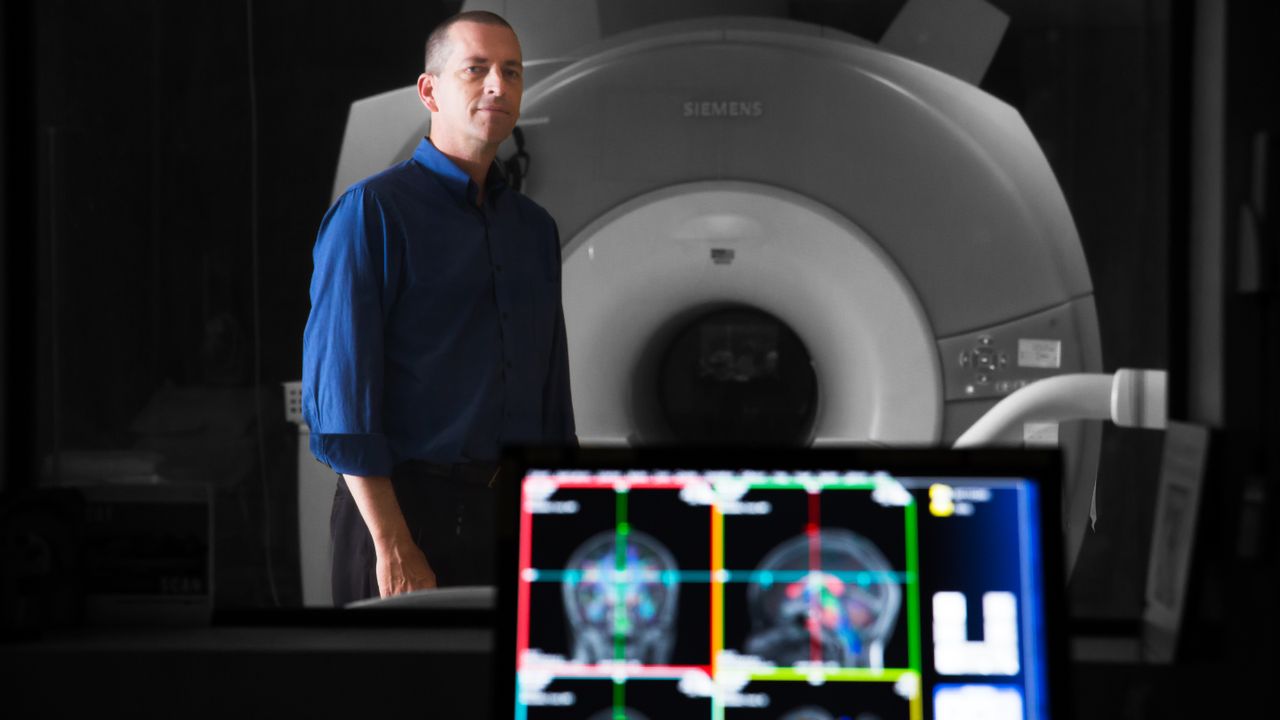 Vince Calhoun’s warm smile deeply contrasts with the cold plastic machine at the center of his distinguished career. During the last quarter century, his research has focused on creating algorithms used in the fMRI scanner to map electrical currents via blood moving through the human brain.

"We need to maximize our ability to see what’s impacted in the brain so we can understand how mental ilnesses work” - Vince Calhoun, executive director, Mind Research Network

Much like his lab’s fMRI uses disruptions in the magnetic field to create images of the brain, Calhoun is making big ripples in the international pool of biomedical research. His analysis, along with his mission to create mentorships and interdisciplinary partnerships for students and researchers at the Mind Research Network (MRN), are why he was chosen as the honored speaker at 62nd Annual Research Lecture.

The University of New Mexico Annual Research Lecture, presented by the Office of the Vice President for Research, was established in 1954 and is one of the highest honors the University bestows on its faculty member in recognition of research and creative activity. This year it is being held on Apr. 19 in the auditorium of Centennial Engineering Center, from 6:15 to 7:45 p.m. The focus of the lecture has not yet been announced.

Calhoun was chosen based on his success creating flexible ways to analyze functional magnetic resonance imaging (fMRI). He is currently Executive Science Officer at the MRN and a Distinguished Professor in the UNM Department of Electrical and Computer Engineering. He is the author of more than 500 full journal articles and over 550 technical reports, abstracts and conference proceedings. During his nearly 11 years working at UNM, Calhoun extended his research to methodically assess the structure and function of the brain, with a particular focus on the study of psychiatric illnesses.

“It’s kind of like trying to find this hidden link,” he said. “And once we find the hidden link, we can start to see if that link changes in patients with mental illness. But if we don’t know where to look, we don’t know how to study it.”

Calhoun didn’t begin his academic career wanting to work with fMRI, in fact his undergraduate degree is in Electrical Engineering. While studying at the University of Kansas, he was introduced to the idea of Biomedical Engineering; and recognized parallels between the two fields – like how blood flow and electrical current in the human body can be modelled in similar ways to electrons moving through a circuit. He became fascinated with the concept of MRI and its ability to map portions of the body simply by disrupting the magnetic field around them. 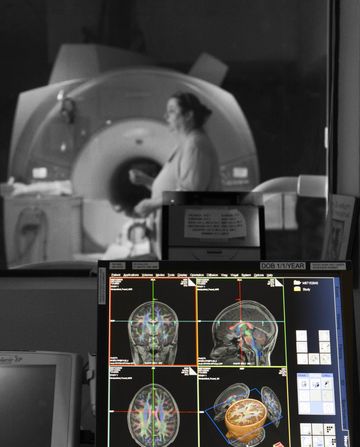 He followed that newborn curiosity to Johns Hopkins University in Maryland, where he earned a Masters in Biomedical Engineering and another in Information Systems. Around that time, fMRI was invented and researchers discovered brain activity could be seen using the new technology, without injecting any type of dye or chemical into the body – a turning point in non-invasive neuro research.

“You can see inside a living human person without poking them with anything, and that really piqued my interest during the first few years of graduate school,” Calhoun said. “I began focusing on fMRI and even conducted a few early experiments.”

From the classroom to the lab

During graduate school at Johns Hopkins University in the early 90s, Calhoun began working as a research engineer in the psychiatric neuroimaging lab. The job extended beyond graduation, and he spent a total of ten years working alongside psychologists – hearing them discuss all the things they wished they could see in the brain.

“I got very interested in studying mental illness using fMRI,” Calhoun said. “And developing techniques that could help us unravel these very complex mental diseases.”

While continuing to conduct research at Johns Hopkins from 1993-2002, Calhoun simultaneously worked towards his Ph.D. in Electrical Engineering at the University of Maryland. The pairing of biomedical and electrical engineering image processing schooling enabled him to continue moving towards his goal of developing techniques to examine images of the brain.

“My main interest is how you analyze the date,” said Calhoun. “In particular, not making too many assumptions about how we think the brain is working.”

His drive to analyze data laid the foundation for another major theme in Calhoun’s work: neuroinformatics. Neuroinformatics is the official name for research that focuses on organizing neuroscience data using computer models and analytical applications. On its most basic level, neuroinformatics allows Calhoun and others to manage mass amounts of data, right as it comes out of the fMRI scanner. The researchers can also manually enter information, allowing them to build up a large repository of data and get very precise information on small changes in the brain.

Calhoun began developing his neuroinformatics program after leaving Johns Hopkins, while working as an assistant professor and the director of the Medical Image Analysis Lab at Yale University’s Hartford Hospital in New Haven, Conn. While continuing to work on the project there, he also helped build an imaging system at the Institute of Living, one of the first mental health centers founded in the Unites States. The imaging center provided the Institute of Living with a foundation for studying the brain function of their considerable psychiatric patient base.

Calhoun’s research looks closely at people with a wide range of mental illnesses, from schizophrenia and bipolar, to Alzheimer’s and autism. In particular, it targets ways to make an impact on people who are very early in their treatment; and he hopes by mapping brain function and volume, he will be able to help at-risk patients before they are even diagnosed.

“We’re also looking at water diffusion,” Calhoun said. “If you can get a map of water diffusion across white matter in the brain, you can start to see these brain tracks.”

By mapping the brain tracks, researchers can see how different sections of the brain are interacting – which could lead to learning about more effective treatment and preventative measures.

“Mental illness is really a difficult and complex thing to study,” said Calhoun. “And we need to maximize our ability to see what’s impacted in the brain so we can understand how the disease is working.”

Calhoun says this type of research can help physicians, psychiatrists and others respond to mental illnesses in a more effective way, because they will know more about what they are combating. His work creating algorithms to analyze mental illnesses caught the attention of recruiters at the Mind Research Network and at UNM, and Calhoun relocated to Albuquerque in 2006.

“They were already building tools similar to what I was building, in regard to neuroinformatics,” Calhoun said. “I wouldn’t have picked Albuquerque out of a hat because I didn’t know anything about it, but it’s been a good move.”

Not only was the move to New Mexico profitable for his career, Calhoun says it has also been beneficial for his family. Together, he, his wife and three kids enjoy the New Mexico sunshine, its sprawling mountains and plethora of outdoor activities.

The Annual Research Lecture will be held Wednesday, Apr. 19 in the Centennial Engineering Center Auditorium from 6:15 – 7:45 p.m. There will be a reception beforehand in the Stamm Common Room from 5 – 6 p.m.