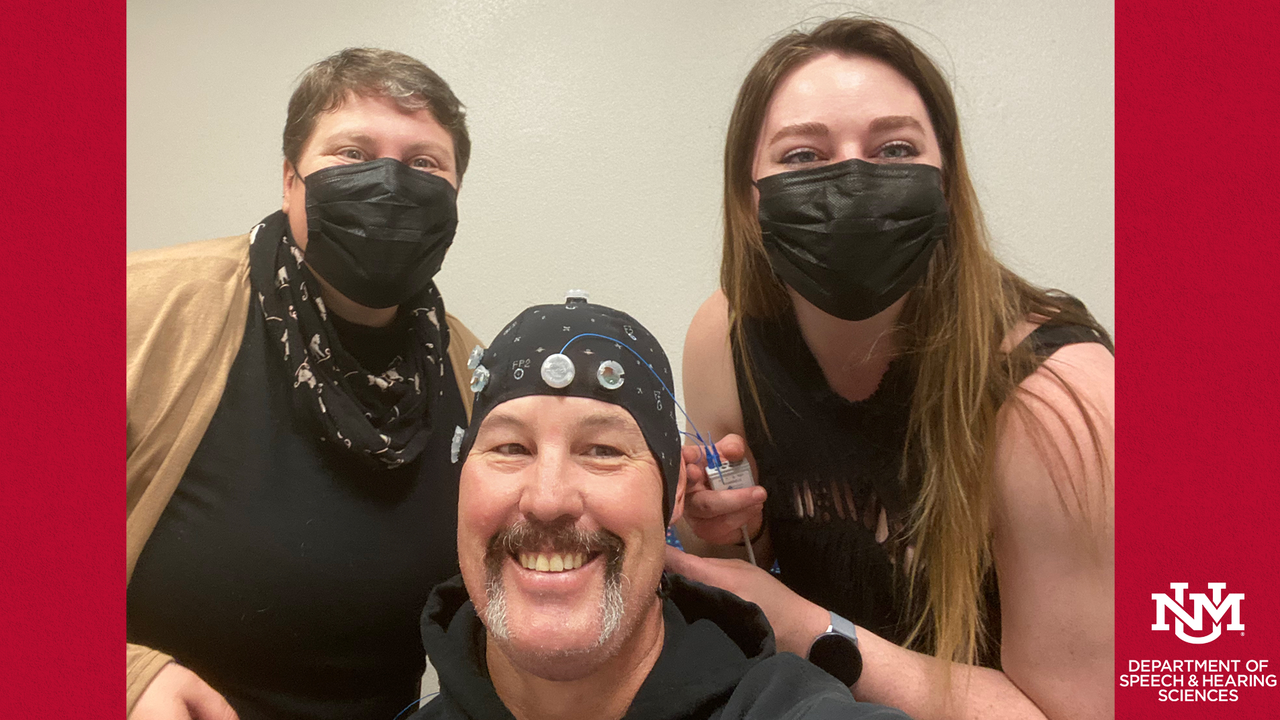 The ​​ability to say words, form sentences, and openly speak with people around you may seem like a very normal part of everyday life. In fact, you may even dread certain conversations with certain people.

Not everyone has that luxury, however.

When someone experiences a stroke, oftentimes, the left side of the brain, the speech and language center, is damaged. The brain automatically must use new, healthy areas to regain the very basics of speaking, as if for the first time.

Loss of the ability to use spoken language because of this damage is characterized as aphasia–a reality over one-third of stroke survivors face.

“The inspiration for this project and others came after more and more experience with people with aphasia,” Lead Researcher and Associate Professor Jessica Richardson said. “The impact ripples out also to the family as well. It's not just the patient. I was seeing that need and that we needed to do something about that.”

Richardson and her team are focusing on rebuilding speaking, understanding, reading and writing beyond a normal rehabilitation period through noninvasive stimulation of specific areas of the brain.

It’s thanks to a $2 million National Institute of Health (NIH) grant awarded in Nov. 2021. Now, over one year later, plenty is being learned when it comes to aphasia, treatment and brain stimulation.

“With stroke or with other brain injuries that lead to aphasia or other communication deficits, it’s usually been about linking a lesion, or the loss of brain tissue, to the deficit,” she said. “But now we actually know that the brain that was left after a stroke or a similar event wasn’t being optimized in terms of its capability, so if it's not at the top of its game. That means there's probably still further that that person can go in terms of treatment or rehabilitation.”

“The methods are tight, they're rigorous, they're going to actually be able to tell us something with greater inference or power. So that's a big contribution,” Richardson said.

The non-invasive approach involves individually modeling the brain stimulation electrode cap. After a 3T MRI and EEG, the researchers can pinpoint exactly where the neuron groups they want to target are in one’s brain. A cap with electrodes is placed on one’s head to shepherd electrical currents to help modulate the brain’s activity in that area while at the same time the brain is also being modulated by the speech-language treatment.

“We get the high-resolution picture of the brain and register it to their body in real space to make sure that we are able to target the area of the brain that we want very intentionally, and as precisely as possible,” Richardson said.

“We're wanting to see if, as a result of treatment, we're affecting everyday communication in adaptive ways,” she said. “That includes doing a lot of testing of their speech, their language, their cognition.”

What makes this combination of techniques so unique is what Richardson and the team are using to their advantage: the brain’s plasticity.

“We use this brain stimulation to coax that brain along, to kind of support it, scaffold it, and facilitate its neuroplasticity mechanisms even more,” Richardson said.

While the brain stimulation is part of the experiment, the participant and researchers collaborate on the other half. They walk through a picture of an everyday item, like a puzzle. The participant works through word association techniques with categories like use, appearance, rhyming words. Depending on the severity of the aphasia, they may or may not be able to combine all of these to provide a full description without some clinician assistance. In combining word association, naming pictured objects, and narrative structure, Richardson believes this could be a missing piece in functional language reacquisition.

“What we were able to show with the pilot study in 2019 was that not only did we see enhancing effects above regular treatment alone for naming and reaction time, but we also saw changes in their discourse,” Richardson said. “This is huge because that's a functional measure that's really going to impact them in their everyday life.”

Stroke survivor Eric Hawton has been a study patient since the very beginning. Hawton suffered two strokes in the span of a few weeks back in 2016. He went from running 50 miles a week and working as a volunteer firefighter and city engineer to being able to barely speak five words.

“It's hard because you know the words that you want to say, but there's something wrong with your brain. They're not connected–the vocal cords and the words,” Hawton said. “I was pounding my left leg because I was so frustrated, because I couldn't say the words. I could see the words in my brain, but I couldn't say it. It was really hard for me to get that understanding of ‘this is my life’.”

With the support of his family, and his hard work towards each painstaking consonant and vowel, Hawton’s time with UNM’s Speech and Hearing Sciences Brain Scouts Lab has helped him get his life back.

“It's hard, but you can see the progress every time you do in the study and it's certain you can take your time,” he said.

He and the UNM research team have formed an unbreakable bond six years later. Hawton hopes every year put in, is a year someone else gets back.

“I'm giving back to the people that got me where I am now. Now I hope we can help patients who have the strokes, to tell them that they can be a productive member of society.”

There is still a long way to go, with the grant’s life in effect through 2026. Even after that, Richardson said, at least another decade of research could come from what has begun.

“I don't think of this as me and my team changing the world in five years. It's us making a lot of steps and changing it as we go. But this is a long-term plan,” Richardson said. “We haven't hit a plateau. We haven't hit the end. There's so much more work for us to do to make sure that we really maximize the plastic potential of the brain.”

New patients are still being accepted. Anyone interested can reach out to the Brain Scouts. Or call 505-433-7766. Learn more about this exciting research underway and what’s to come at Speech & Hearing Sciences, or at the Brain Scouts.