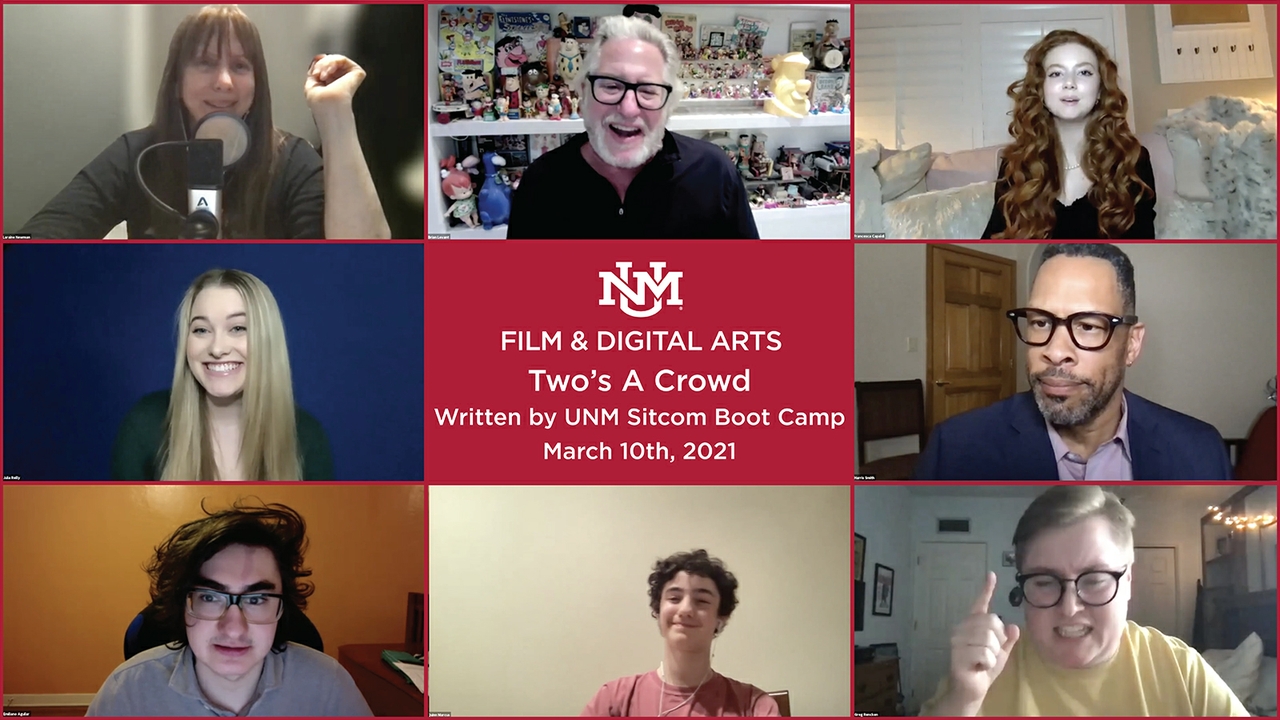 Since 2017, the Sitcom Boot Camp hosted by The University of New Mexico Department of Film & Digital Arts has presented a performance of an episode created and written by students to a live audience. But when the pandemic put a stop to in-person classes and large gatherings, the group of writers and performers had to go virtual for the first time.

Two’s A Crowd was broadcast live via Zoom on March 10, grabbing an estimated audience of about 300 viewers, according to Levant.

Both creators and instructor were happy with the end product.

“Given the fact that the cast was spread over San Diego, Los Angeles, Portland, Albuquerque and Atlanta, it was amazing how fluid the interactions and performance were. Dean Harris Smith was a stand-out playing six different roles, and our special guest Laraine Newman was warm and funny portraying a Judy Chicago-esque Santa Fe artist,” Levant said.

Photographer Josh, played by UNM senior Emiliano Aguilar, is depressed over losing his job and an upcoming photo exhibit to the pandemic. UNM student Ali, portrayed by actress Julia Reilly, is fed up with Josh’s “pity party,” and leaves to take a job as an au pair, taking their hamster Mr. Whiskers with her.

Laraine Newman, known for her part in the original Saturday Night Live cast, is Josh’s Nonna, a Santa Fe artist named Agatha Beaumont, who has “survived cancer, art critics, and seven Republican presidents.” She also has a short bit as a COVID denier on her way to a tropical vacation.

Travis, the smart-mouthed teen son of COVID-denying parents with a book report due on Lord of the Flies, is played by actor Quinn Topper Marcus. His beautiful and snide girlfriend Charity, who needles Ali unmercifully, is portrayed by Francesca Capaldi, the star of NETFLIX’s Crowne Point. Comedian/actor Gregory Rencken is best pal Doughy, who tries to snap Josh out of his funk after Ali leaves him with Loony Tunes videos. 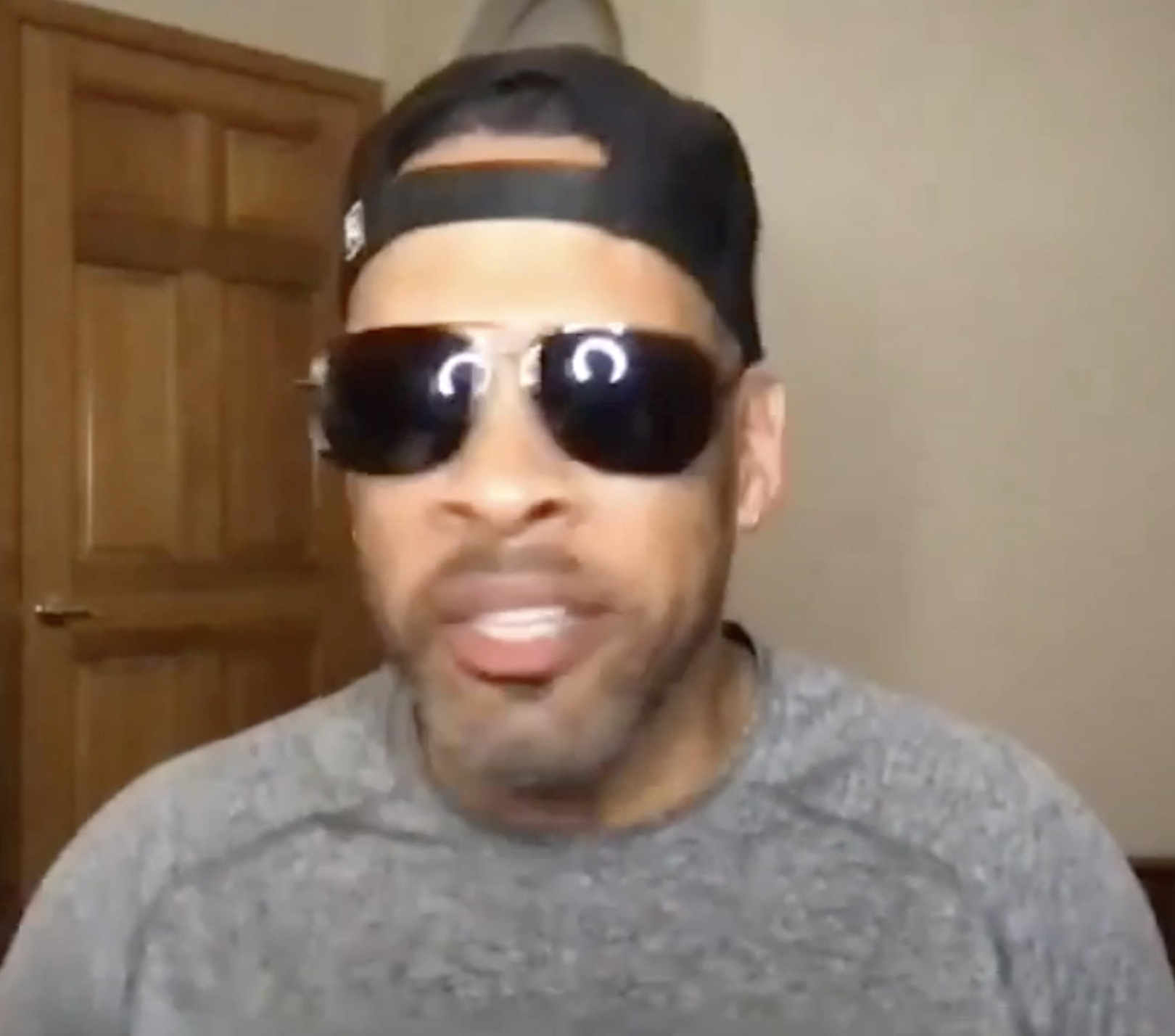 CFA Dean Harris Smith in one of his multiple roles

UNM College of Fine Arts Dean Harrison Smith pops up throughout the production as a newscaster, a teen partier in search of a bathroom, a frat boy with a keg, and a police officer who busts Charity as she live-streams an illicit party during the pandemic.

In the best tradition of sitcoms, all’s well that ends well as everyone looks forward to a pandemic-free future.

“Obviously, while the current state of the world did not allow us to have a traditional table reading, I still feel that the performance was super fun and went as smoothly as possible,” remarked student writer Alarid, a senior in the BFA Film program. “Hearing the lines we wrote acted and said in a particular way allowed me to see them in a different light as opposed to simply reading them after we wrote them. I did, however, miss being able to hear our audience's live reactions to each joke or funny line myself and the other writers had devised. Regardless, I still did have a lot of fun in the course and at the reading.”

Another student creator, Alice Marshall, a junior, majoring in Film and Digital Media Arts was also pleased with the outcome.

“It was amazing for us to see our characters and their stories coming to life before us through the actors' interpretations and performances,” she said. “Every one of us got positive feedback from those we invited to watch, though we did hear a lot that the Dean's costume changes were the best part. We were honored to have actors and writers of this caliber helping us before, during, and after the show, and I know it's not an experience any of us will soon forget.”

The cast enjoyed meeting the writers during our rehearsal was very complimentary about their work, Levant said. Some of his colleagues who’d seen or read previous Boot Camp projects thought Two’s A Crowd was the strongest yet.

“I certainly felt that this was our most ambitious narrative, weaving multiple characters and storylines.  There were some genuinely funny scenes and a couple of surprisingly tender ones as well,” he observed.

Levant said he looks forward to when the creators and actors can put on a full, live production again as he reflected on the success of the virtual project.

“As I said in the beginning of the reading, there is an old axiom in our business that ‘The show must go on.’ While riding out the pandemic, the class found a way to collaborate and road test their material— and proved that socially distant needn’t be emotionally distant, telling a story about the way people dealt with the massive adjustments we all had to make just a year ago.”

“I’m sure that seeing their work brought to life by actors of this caliber was exhilarating, but what’s most important for me is that the class learned the level of commitment, collaboration and effort it takes to be successful and apply it to their own work.”