Taking an academic sabbatical to sleuth

Kelly to spend next six months on a hot trail
By Karen Wentworth January 07, 2015
Categories: Inside UNM

As director of the UNM Center for Southwest Research and Special Collections, Mike Kelly is also part-time detective. Always on the lookout for documents or photographs of southwest history that can be added to the extensive collections in the UNM libraries, Kelly now launches a full-time investigation into a very specific part of Albuquerque history, taking a sabbatical to look into some glass plate negatives that may have been left in the city by famed photographer Karl Moon.

Moon was originally from Ohio, but came west in 1903 to photograph Native Americans. He set up a small photography studio in Albuquerque with a partner, Thomas Keleher, and began taking photos of the life he saw around him, making frequent trips to nearby pueblos to record a lifestyle he saw was quickly vanishing. He also photographed many Native Americans in formal poses in his studio.

Moon moved to Arizona a few years later and began collecting photographs and art for the Fred Harvey Company. Fred Harvey had established a number of eating establishments and hotels for railroad travelers and for eastern tourists who wanted to experience the west. Harvey Houses displayed photographs and paintings of Native Americans and western lifestyles. 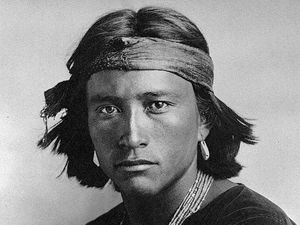 Navajo boy is one of the most well-known images taken by photographer Carl Moon.

Moon eventually moved to Pasadena, Calif., and went to work with another major collector, Henry E. Huntington, whose collection is now housed in the Huntington Library in San Marino, Calif. During his time in California, Moon also painted and wrote children’s books. The Huntington Library owns much of his work, including more 250 Native American prints.

Kelly will spend some of his six-month sabbatical at the Huntington Library, but a major part of his research is trying to track down a part of Moon’s legacy. “For years there have been rumors that Moon left some of his negatives in his studio in Albuquerque," Kelly said, adding that he is already talking with an individual who has boxes of glass plate negatives that may have been Moon’s, but there is no documentation. Kelly will spent time trying to determine whether the negatives are Moon’s work.

Kelly hopes to add to the CWSR’s digital collections of Native American images. He eventually would like to do a publication featuring the photographs, but says it will take a great deal of work before that would be possible. The word sabbatical means to refresh and rest. Kelly’s sabbatical may not involve resting, but he hopes his time on the trail of Albuquerque’s historic past will offer an interesting glimpse of some of the people who once lived here.