Taking good care of our things

The beauty of University of New Mexico is seen through its buildings and landscapes. It can also be experienced through UNM’s decorative arts, particularly those pieces that represent the Spanish Colonial Revival tradition. UNM Curator Audra Bellmore has established and put into place a plan to inventory and tag those pieces – everything from furnishings to fixtures.

“This is a fairly unique program. We are among just a few universities, including Johns Hopkins, to document a campus’ decorative arts,” Bellmore said. “UNM is distinctive in its special style of art and architecture.”

The inventory has its roots in the Getty Campus Heritage Grant, which UNM received in 2004. “We proposed to do a survey of campus furnishings. The pilot was to be Zimmerman Library because it has the highest density of artifacts still in use,” said Terry Gugliotta, UNM archivist and PI on the grant, which was handled by the campus Historic Preservation Committee. “The idea is to trace the history of pieces – lamps, furnishings, tinwork and such,” she said. “The legacy of the Getty grant will forever live through these next projects.”

At the time, Gugliotta was chair of the HPC. Bellmore is now. Bellmore is organizing a Decorative Arts Symposium to bring experts in to see what UNM has and perhaps offer more information on the pieces than is currently known. “Private collectors and scholars will share their expertise on the artists and their techniques,” Bellmore said. 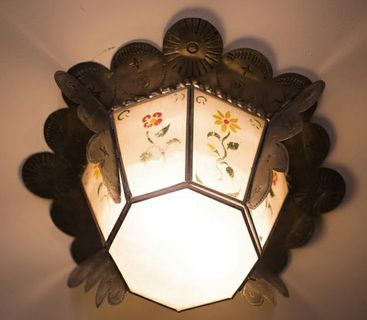 'Ah ha' moment
When the President’s House was renovated in 1990, Gugliotta interviewed many people about the origin of the hand punched tin light fixtures, but didn’t find out. “They held a public open house. A lady who went through mentioned to Donna Peck (wife of President Richard Peck), ‘My father made that,’ pointing to a fixture. The Decorative Arts Symposium may also reveal some secrets,” she said.

To get at the wealth of items across campus, Bellmore searched the UNM archives, specifically the Facilities Planning collections. “We found brochures for heating equipment, some furnishings and drawings,” she said. Chairs that grace Zimmerman Library’s west wing were originally purchased in 1938 and were designed by John Gaw Meem. Some of them were replaced in 1992. Identifying and tagging individual pieces to differentiate between them is part of the process. “Tagging will be electronic to track and protect the items,” Bellmore said.

Bellmore employed the services of graduate student Lillian Makeda, a Ph.D. candidate in Art & Art History. “We compare the individual items to archival materials. It’s a scholarly project that ultimately will capture pieces within all campus buildings,” Makeda said.

Mystery of a historic table
Makeda said that one large library table piqued their interest. “There was an identical table at the Museum of New Mexico. We found the drawings of the table in the archive, which attributed it to Jesse Nusbaum, designer of the museum’s table. We thought we had a prize piece. Another archival document attributed it to John Gaw Meem. As it turns out, Meem reproduced the table for the UNM Board of Regents. He designed 12 chairs to go with it,” she said, adding that Meem enjoyed picking out great items to copy.

Bellmore said that searching through the archives helps them identify who designed and made the pieces, some of which are works made through the WPA and the National Youth Administration. 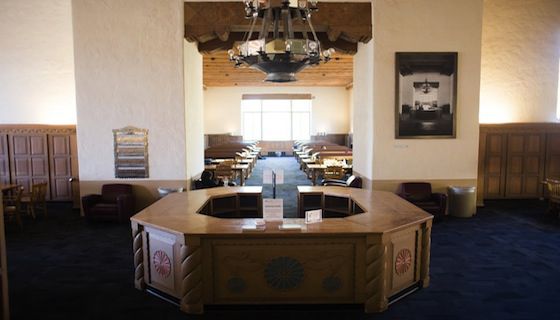 The painstaking process to document the pieces serves another purpose. “The pragmatic component is that we have the pieces photographed and inventoried for insurance purposes. Should they be stolen or damaged, we have documentation that they were owned by the University,” Bellmore said, adding that they are working with Safety and Risk Services to get certain items appraised. The electronic inventory will help track items that need repair, such as many of the punched tin pieces.

Bellmore added, “We are asking people to email us if they have pieces or are aware of pieces that should come back to the University.”

The decorative arts inventory is a collaboration between the Historic Preservation Committee, the Board of Regents and the Center for Southwest Research. “Hosting the inventory in the library’s online archive gives it the permanence it needs,” Bellmore said.