This information was released locally by the University of New Mexico's Bureau of Business and  is important for public officials, planners and business in assessing the needs for services of various population groups.

For 10 years, the American Community Survey has provided U.S. communities with detailed information critical for making informed decisions about their people, places and economy. Today, the U.S. Census Bureau released the latest American Community Survey five-year statistics, allowing users for the first time to compare two non-overlapping five-year data sets: 2005-2009 and 2010-2014. Users can now identify trends for social and economic characteristics for even the smallest communities on a more frequent basis. As a result, housing and population statistics are available as of 2014 down to the tract level.  The following chart depicts Median Household Income versus the Median Gross Rent for selected small communities across New Mexico. 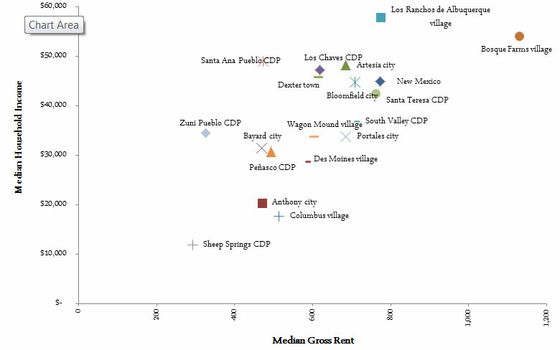 As the nation's largest ongoing household survey, the American Community Survey produces statistics annually at all levels of geography, down to the block group level for every community in the nation and Puerto Rico.

In addition to today's release of statistics using data collected between 2010 and 2014, the Census Bureau has produced a series of maps; detailing county-level change for six socio-economic characteristics. Without the American Community Survey, these maps would only be possible every 10 years. The maps highlight just a few of the more than 40 topics available from the American Community Survey that public officials, community leaders, business owners, researchers and many others rely on to plan and make decisions.

Furthermore to the statistics released today, the 2014 Small Area Income and Poverty Estimates will be released next week. These estimates provide single-year income and poverty statistics for all counties and school districts nationally. Data from the American Community Survey are an important input to these estimates.

Because the statistics are from a survey based on a sample of the population rather than the entire population, the American Community Survey produces estimates.  To aid data users, the Census Bureau calculates and publishes a margin of error for every estimate. The guidance on making comparisons, visit U.S. Census Bureau.